Sean Lee has been high jumping for 10 years, his father and coach, Ron Lee, said.

Saturday, Lee, a senior at Trabuco Hills High, had the performance of his high jump life, with three PRs and a 7-foot, 3-inch clearance that landed the defending CIF-State champion onto the list of CA's all-time elites.

We'll get back to Lee in a sec, but northeast across the state, Clovis Buchanan HS junior Christian Johnson, at the Friday night Buchanan Distance Classic, apparently took the meet title literally when he stepped into the discus ring and unleashed a throw of 191-9, shooting himself to the top of the U.S. rankings and figuratively painting a bull's-eye across his broad shoulders for the rest of CA's strong throwing group to aim for. Johnson also went 53-1.25 in the shot. Not bad work for a track meet in February. 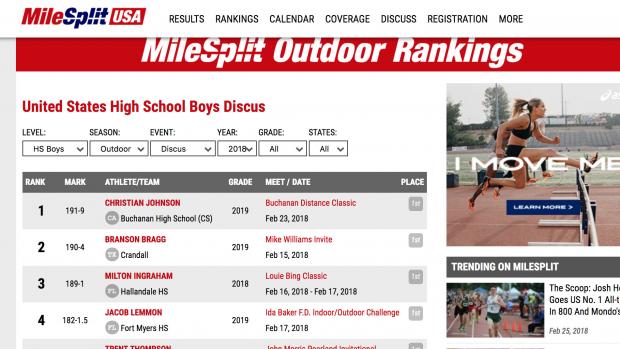 Ah, yes, but we're just getting warmed up.

It was a stellar opening-weekend across the state that had more than a handful of CA's elite athletes working out the winter kinks and others displaying heart-of-the-season form.

At the Bobbie Brass Sprint Carnival in Clovis, the relay quartet from Clovis North ripped off 4x1s and 4x2s that put the rest of the state on notice.

Take notice, folks, the fellas at Clovis North are not playing. 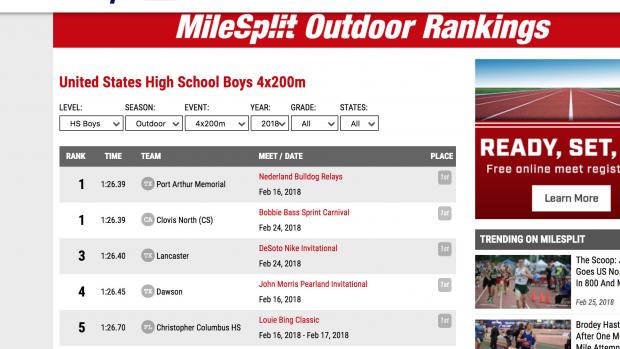 Lee, who won the CIF-State title last June with a clearance of 6-11 and had a previous PR of 7-0.25, boosted his PR by 2.75 inches on Saturday at Trabuco Hills. 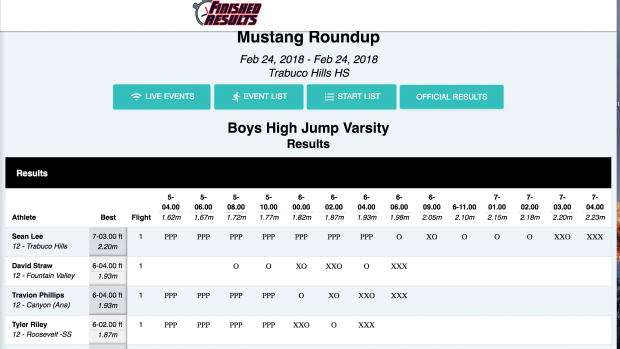 Note that those 100m hurdle times rank No. 1 and No. 3 nationally based on posted results.

The NXN-qualifying and CIF-State D1 XC boys distance crew from Roosevelt was represented well at Trabuco by Raymon Ornelas, who put down a nice 800-1,600 double (1:57/4:24).

The Jackrabbits lineup -- sans regular Saundria Martin -- of Augustine, Jaelyn Predium, Quwshaya Peters and Kenya Payne posted a time of 1:41.52, which ranks 13th nationally but only No. 2 in CA following the 1:41.09 by Clovis Central at the speedy Bobbie Bass Sprint Carnival.

The girls triple jump at the Eagle Invitational at Santa Margarita produced two big marks from Mater Dei teammates, Dominique Ruotolo, a senior, who went 41-4.50 and Jade McDonald, a freshman, who went 38-9.50.

Also in the triple, Kali Hatcher of St. Mary's College HS in Berkeley, the CIF-State runner-up, opened her season with a 38-10 best at the Skyline Invitational in Oakland.

In the Fowler Throwers Classic, Fowler junior Jocelynn Budwig had a 152-6 best in the discus throw and Bakersfield Liberty freshman Faith Bender opened her high school career at 143-11. Those are two of the top three throws in the country based on posted results.

So, just a sampling of the first weekend.

And it's still February.