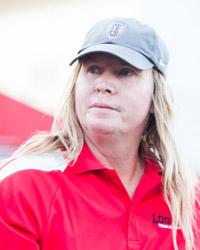 If you started listing the most successful Track and Field coaches in California history, James Logan coach Lee Webb would be high on your list. The team's slogan which was started in the 90s is "Believe to Achieve" and his athletes and teams have definitely achieved. Many of the school's records were set during his tenure and you can find them at this LINK. I don't think there are too many schools in the nation that could compare to James Logan when it comes to their incredible depth of performances in so many events.

Coach Webb was born on a dairy farm which is where he learned how to work. He participated in cross country, football, track and field, baseball, golf and basketball during his youth. At Southern Oregon University, Coach Webb participated on the football, basketball and track and field teams. He eventually graduated from Oregon State University and was drafted by the Seattle Seahawks. He also participated in the Olympics Trials in the Decathlon and Javelin.

He started teaching at James Logan High School in 1992 as well as coaching the cross country and track and field teams. Starting out with 9 girls and 22 boys, his teams eventually swelled to over 300 track and field athletes. His first year coaching cross country, Coach Webb started with 15 students and that numbered grew to 125 athletes. The love of his athletes can be seen in the 2013 video below when Cal-Hi Sports did a feature on the legendary coach.

During his tenure at James Logan, Coach Webb's accomplishments are, to say the least, IMPRESSIVE! He was inducted into the Arcadia Invitational Hall of Fame. He was the California Coaches Association (CCA) Girls Track and Field coach of the year in 2005. He was inducted into the CCA Hall of Fame in 2014. His Cross Country teams (girls) won North Coast Section titles in 1992, 1993 and 1995. Josef Ghebray was the individual state Division I Cross Country champion in 2003.
His Track and Field teams won NCS championships in 2001 and 2003-2011 (girls) and 2002-2007 (boys). His boys won a state team title in 2004 while the girls won their own title in 2006. His girls also finished second as a team in 1995, 1996 and 2004. According to Coach Webb, his 2004 girls' team was his DREAM TEAM. Individually, James Logan athletes won 16 state titles in the following events: 800m, 3200m, 100m Hurdles, 110m Hurdles, 300m Hurdles, Long Jump and Triple Jump. One of his athletes, Kevin Craddock, set the California state meet record in the 110m Hurdles in 2004 with a time of 13.39 that was finally broken by Joseph Anderson at last year's state meet. His 1996 girls' 400 relay team also won a state title. You can watch his induction in the CCA Hall of Fame below which lists many more of his achievements during his run at James Logan.
Coach Webb would be a legendary coach based on his athlete's accomplishments alone but there is more. During his time at James Logan, he has also been a prolific meet director and clinician. His Willie Davenport Olympian Clinic (video below) has included an amazing gathering of Olympians including Willie Davenport, Billy Mills, Stephanie Brown-Trafton, Kevin Young, Mike Powell, Lee Evans, Tommie Smith and many more. Many young athletes have had the pleasure of getting feedback from some of the all-time greats in our sport. Coach Webb has also has been a major contributor to the Special Olympics hosting events which included many of his athletes volunteering as hosts.
Veteran Northgate (formerly Castro Valley) coach, Peter Brewer had this to say about Coach Webb.

"It's hard to laud Lee too much.   And he is so deflective about taking credit.   But he has built and rebuilt his program over the last three decades and reinvented himself as jumps coach, sprint coach, and distance coach.  He has done remarkable work on the youth and club level in addition to his high school work and was also selected as a USATF coach for a Youth team (15-18) at a world championships.   He's had to deal with cancer taking his ex-wife, and beating back melanoma himself.   He has attracted some of the best assistant coaches around, and sent too many athletes to college, with some becoming NCAA scorers, USATF national finalists, and Olympic Trials qualifiers.

And to run into the guy and talk with him, you'd come away convinced that it was an accident for all the credit he takes.   He has put on major meets, continues to host Pacific Association summer meets and Special Olympics, and does the sub-section area meets for NCS.    And through it all, he is genuinely a nice guy."