1) Your team just finished in second place at the CA state meet Div. I race and qualified for NXN. What was the reaction of the team and coaches when the results were announced?
When heard the raw unofficial score at the State Meet that was first announced it was that we had lost to Great Oak 84-87 and I was like oh man three points?!? Then it was officially 75-90 which was a huge improvement from the Southern Section finals. Once we saw the final score we knew NXN was a good possibility. We just had to wait it out for St Francis and Dublin in D2 to race to see where we landed since they were coming in running really well. They both had great performances too so it became a waiting game. I actually had my phone next to me on the table refreshing it over and over as we had lunch as a team. It wasn't until we got on the road that we found out we were an auto qualifier via Twitter.  Then I gave my assistant coach a call since he had all of the boys in the van and let them know via speaker phone and all I heard was yelling and cheering in the background. The kids were ecstatic.

2) When did qualifying for NXN first appear on the radar for your team?
We knew we had a chance from the beginning of the season bringing back a good core of last year's state team back. However, we never talked about it until it got closer to the State meet as we take a week by week approach to everything, to not look too far ahead. Once we took the runner-up spot at the Southern Section finals over other highly ranked programs, my assistant and I knew it was a big possibility for at least an at-large bid if we could repeat the performance at the State meet, which we fortunately did and some. We were also definitely looking at other NXR races in particularly the region that Crater, OR was in because we had raced them early on at the Portland XC invite, they wound up taking 3rd I think in their region. Knowing where they finished gave us confidence we had a shot.

4) What was the state of the team before you arrived as a coach? What changes did you make right away? Who were the kids that bought into your program and helped you get to this point as a team?
I came in the 2nd year the school was open and the team was extremely small, 5 girls and 10 boys total. I was able to get the team to CIF prelims in our first year and wanted to build on that. I knew I needed more numbers so I started recruiting heavily to grow numbers and increase chances of finding hidden talent. It took a while but we created a culture of hard work and dedication which has gotten us to where we are now. Between 5:30am practices from Aug to Nov to avoid the Inland Empire heat during those months, double days, weights and holding our athletes to high academic standards as well. Our senior class has set that bar for our program as to where we can be when you believe in the system, so I give them credit for where we are now. 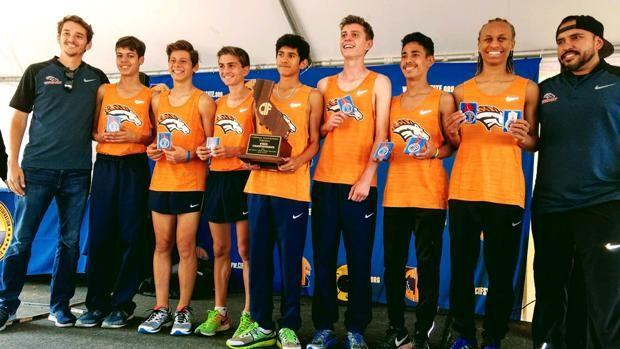 5) Did you have any goals for yourself when you first started coaching the team?
I wanted to create a safe and supportive environment for our athletes to excel both academically and athletically. I also wanted to create a competitive program not just in our league but in our division and state level. Since then we have raised the bar as an athletic program at our school.

6) What was your own experience competing? What were some of your own athletic highlights before, during or after high school?
I ran XC and Track in high school actually at one of our league schools, Corona HS. While I was there we won XC and Track team titles. I was an all Riverside county athlete my junior year and qualified for CIF individually as an individual both in XC and Track (3200m) my senior year. In high school, I was a tri-sport athlete competing in XC,  Basketball, Soccer, and Track. Basketball and soccer were in diff years of course. After high school, I, unfortunately, didn't compete collegiately, which is one of my biggest regrets but began competing in 5ks more often after I started coaching.

7) What led you into coaching? Who do you consider to be your coaching mentors?
My father led me into coaching. I would hang out with him as he coached basketball and football when I was younger and eventually coached with him. I was his assistant coach for 6 years at the varsity level. I knew I really wanted to coach once he gave me my first opportunity to coach my own team at the freshman level where I had a team finish with a 20-3 record. I began coaching track that spring and the rest is history... When it comes to XC and Track I took a lot from my high school coach Bob Adams. He has since stepped back from coaching but the culture he created when I ran for him was one I enjoyed and wanted to recreate. That included carb nights, beach runs, team bonfires and summer running camps. All things that we do now.

8) What does a typical training week look like for your team? Morning runs? Typical mileage? Workouts that are repeated throughout the season? Strength work?
During regular season every other day is a double day in order to stay within CIF rules. We are on rolling block schedule so it works out nicely. We have first period XC so we run during school time and after school, we have mandatory study hall followed by weight room. Typical mileage is about 55-65 miles a week. We utilize a lot of tempo and fartlek type workouts throughout the season and stay away from the track as much as possible preferring to run repeats at parks instead.

9) Last year, your team finished in 3rd place in Division I. This year, your team moved up to 2nd and qualified for NXN. Did you make any radical changes from last year?
We didn't make any major radical changes, we definitely added some new stuff here and there but mainly we just had a meeting at the beginning of the season to go over last year and set our main goals for this season. We decided who was racing which races or not back in August so everyone had buy in and they all agreed on the end goals being the state meet. So, we chose two races to run our true top 7, Portland XC and Inland Empire Challenge before CIF Finals. This also included making sure we didn't race hard when we didn't need to, we made that mistake last year running too fast at CIF prelims which took a little out of our legs at Finals. We made sure not to make that mistake twice and it paid dividends over the past couple weeks.

10) Now that the state meet is in he rear view mirror, you can look ahead to NXN. How familiar are your runners with the course and the event?
Our guys are familiar with the event as it is pretty much the holy grail for a HS XC athlete. I don't think they realized how much goes on until we got our itinerary today and they are super excited about everything. We also have made sure they remember they are there to compete and not just hang out.Weather-wise we have ran in Oregon weather before and on a more XC type course at Portland XC at Portland Meadows the previous site of NXN back in September. We have also competed at Stanford before which is what we have been told it is slightly comparable course type with more change of grade and definitely more mud.  We have watched last year's NXN videos and asked athletes who have run it before for advice. So we have an idea of what to expect. The high level of talent may put some of our guys in positions they have never been before place wise and we have mentally prepared our guys for that possibility and to make them aware they could be having a great race and still in 50th+ place. We will have a better idea about the course on Friday when we do the course run through... in the rain. ;)

11) Any shout outs for assistant coaches or other adults that helped you over the past few years?
Yeah, of course, shout out to Lorena Beck who was my assistant coach for 4 years and helped create the culture we have now. We wouldn't be here without her influence. My assistant coach Hector Chavez who is always there to help in any way possible from rides to meets for athletes to running afternoon practices during the summer and getting kids shoe when they can't afford them. Also, to my assistant David Cummings who is in his third season with us. He brings some young fresh blood into the mix and runs with our guys daily on long runs and workouts which helps push our guys a little bit more. He also brings a new perspective into the mix as well. Lastly, a shout out to my booster club parents over the years who have spent countless hours sending emails, organizing uniforms, raising money for our program and most importantly putting up with me. ;) Their efforts are what allows us to go on trips to races both in and out of state to provide our athletes with opportunities to compete against the best competition to prepare for times like these. Thank you!

12) Anything else you would like to add.
We are just excited for this opportunity and looking forward to representing Cali in Oregon. Good luck to the other Cali teams Great Oak and St Francis and the rest of the NXN teams this weekend we are looking forward to making new friends, memories, and experiences. See you all on Thursday!