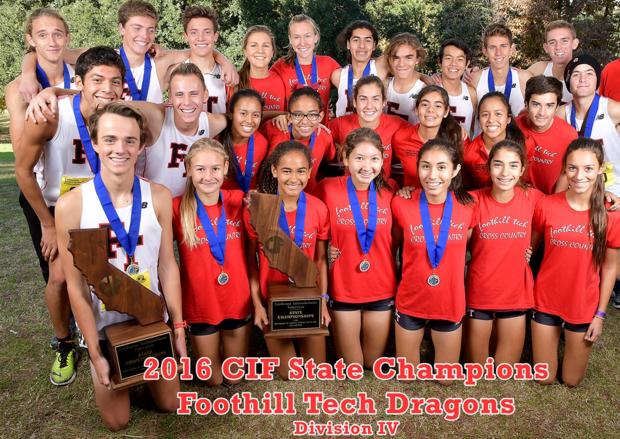 Division IV Girls (Teams)
It is very difficult to bet against a team coached by coach Ken Reeves at the California state meet. Last year, both his Foothill Technology teams (photo above courtesy of school website) won their first state championships in dominating fashions. This season, his girls trailed a record-setting Mayfield team but when it came to last week's section championship, the Dragons surpassed the Cubs 70 to 100 to win handily. I believe they will be even better at the state meet and should win their second straight title. Mayfield is perhaps the 2nd strongest team in this division and should claim their 5th podium finish. The next best team and should not be overlooked for 2nd place is a strong, senior-dominated team from up north, Santa Cruz. Those three teams should be the ones standing on the podium with several teams fighting for top 5 finishes. Those teams include Southern Section teams El Segundo, Bishop Amat, La Canada and JSerra as well as the Sac-Joaquin Section champion Placer.

Division IV Girls (Individuals)
There is only one clear favorite in this division and that is Malibu junior, Claudia Lane. The question is not whether she will win but how much and will she break the course record that is held by Sarah Baxter (Simi Valley) at 16:40. Lane ran 16:45 at last year's state meet which places her as the 3rd fastest girl on the Woodward Park course all-time behind only Baxter and Santa Rosa's Julia Stamps. The chase pack which might not be able to see Lane for long should include Santa Cruz senior, Mari Friedman, freshmen Audrey Suarez of Mayfield and Kayley Bond of La Canada, SJS competitors Kaela Dishion of Bret Harte and Cassi Land of Sonora as well as NCS champion, Gabby Peterson of Healdsburg.