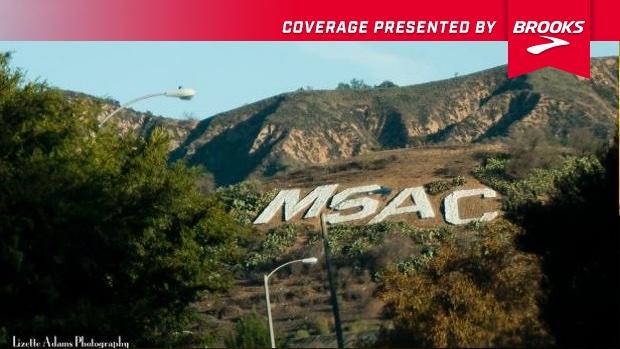 Although the top teams from D1 & D2 will be in the four Sweepstakes races on Saturday morning, we all know that there is more than enough depth in California to fill out the subsequent varsity races in those divisions. In fact, some of the most competitive races of the day will happen after the Sweeps are long done, as teams that will be battling for spots in the upcoming CIF championships will be looking to improve their resumes and get stronger.

Take Paramount's boys, for example. They currently sit at #11 in our Southern Section team rankings, putting them in range to qualify for the CIF finals. There are a lot of similar teams around them in the rankings, including a few that we have ranked below Paramount that are in Sweeps races. Look for the Pirates to try to make a statement in their Division 1 Varsity race, led by Jose Jimenez and Diego Mejia. You should also keep an eye out for Aliso Niguel, another school that might be on the bubble for moving on in the postseason, and their #1 runner Ben McKenna should be in contention for a varsity race win. Edgard Villa (Vista Murrieta) and Ricardo Torres (Channel Islands) are individuals to watch in the late morning races, if they don't get invited to the Sweeps races.

In the girls' Division 1 races, the field is pretty wide open - there don't seem to be any clear favorites. However, there are a few squads that have something to prove, like Palisades. The defending LA City Section D1 champs finished 16th at the state meet in 2016, and they have their entire top 5 back - you can bet they want to make a statement at some point this season behind top runner Sarah Bentley. Also, we haven't seen their #1 from late last season, Lila Copeland, yet this fall. Her return would have a big effect on the Dolphins' prospects in November. I continue to be interested in the Davis Senior girls team, because it's hard to comprehend where they are right now. The Blue Devils have been missing two of their returning top 7 all season, and if the Mitchells aren't coming back, this team will have to work hard just to get back to the state meet. Still, you should never count Davis out, and it won't be terribly surprising to see them break out at some point in the next few weeks and start running like the team we've come to know over the past 3 years and beyond. Stockdale is an up-and-coming program from the Central Section that wants to show they can hang with the Southern Section's big programs. Individually, Westview has a potent 1-2 punch in Ellie Misuraca and Trang Woolridge, so look for them to excel Saturday.

The afternoon session brings us some very solid Division 2 teams, and you can see the same pattern from the D1 varsity races repeated here: teams and individuals looking to make the leap from the second tier into the big time. Take runners like Braydon Metoyer (El Modena), Stefen Rasmussen (Mira Mesa), and Kade Wong (Peninsula) - all three are good, but I'm guessing very few outside of their respective leagues are familiar with them. Capistrano Valley's boys are often overshadowed by their powerhouse girls' team, but they have a good chance to make the Southern Section finals and can show their mettle Saturday. Arroyo Grande has been flying just a bit under the radar screen this fall, staying out of the biggest SoCal invitationals, but they have Luis Jazo up front and a solid pack behind him. They were just behind Rowland (who got into one of the Sweeps races) at the Clovis Invitational, so don't be surprised if they do well when scored against the other D2 squads in the meet.

It's a shame that the Segerstrom girls aren't in the same race as Scripps Ranch, because our database pegs them as almost exactly equal in strength. They would have been a great match-up! As it stands, Scripps Ranch will have to take on an underrated Monte Vista crew out of the NCS, led by Kelli Wilson and Sidney Isom. Individually, Jessica Nye (Peninsula) has the best credentials in the division, although Madison Funk and Giovanna Silva also have the talent to contend for wins.