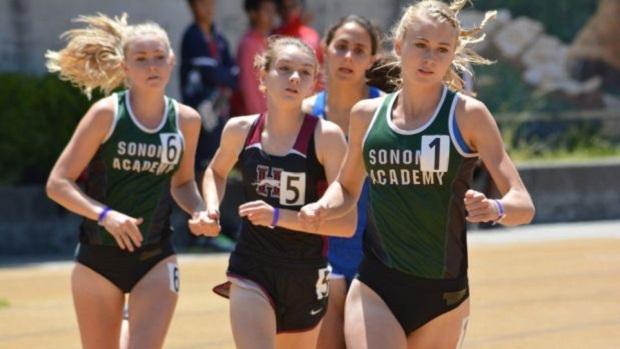 The Sonoma Academy junior is in pursuit of her first track title, and she also talks about the benefits of having younger sister Kate on the high school team with her this year.

Rylee Bowen and her coach, Danny Aldridge, let us visit her final workout before the state meet! Since Sonoma Academy (enrollment 284) does not have its own track, the team regularly practices at Elsie Allen High School, a few miles across Santa Rosa. On Tuesday it was just Rylee and her younger sister Kate, who both plan to compete in multiple events over the summer and therefore continue to train.

Coach Aldridge explains the structure and goals for Rylee's tune-up workout, as she prepares for the 1600 this weekend:

As you can see, coach gave Rylee the green light to push hard on her final 300, resulting in a very comfortable-looking 48 (that's 64 pace for the 400). As a result, Coach Aldridge tells her to keep her spikes on for the 1-lap jog that followed, and Rylee seemed to know what was coming next:

Rylee seemed very confident after the workout, although the wind (and Kate behind us) were drawing her attention. Closing with a 48 for 300 and then a 66 for 400 fits her race strategy for this weekend, and she clearly believes in her ability to contend for the title:

I enjoyed getting to interact with the sisters, and thought it would be fun and interesting to get them both on camera for an interview! They handled it well, giving me a glimpse of their relationship while keeping things from degenerating into total sisterly rivalry: