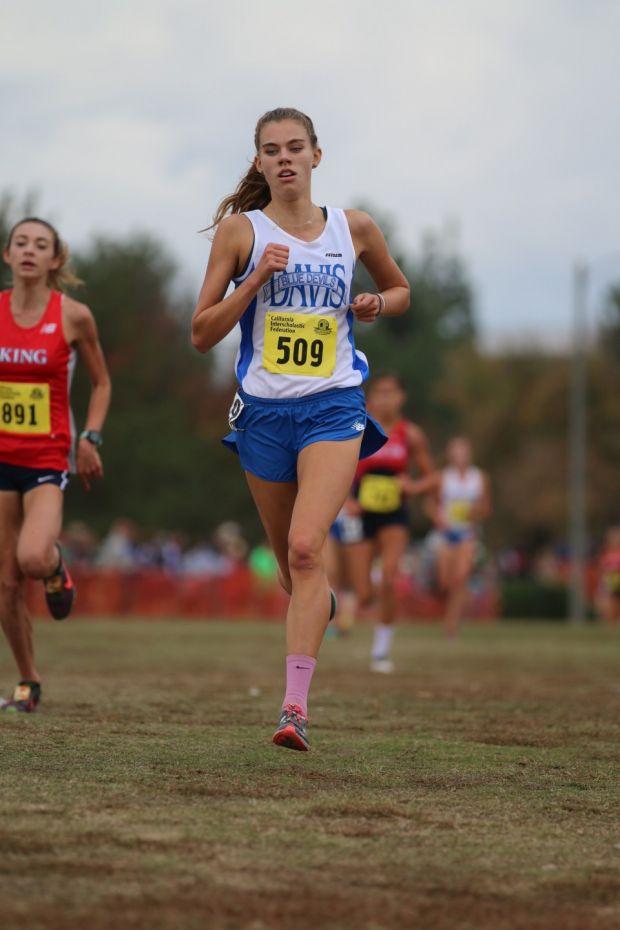 Now that we have had a few days to digest all the efforts and spectacular performances from last Saturday's California State Cross Country meet, I want to share my top 10 takeaways from the meet. The photo above along with over 1500 other photos were taken by Newport Harbor high school senior Ben Crawford, a rising star here for us at CA Milesplit. You can check out the rest of his photos at this LINK. You can also check out all the highlights thanks to Jeff George along with the athlete interviews by Daniel Tyree at this LINK.

10) It's not often that two siblings win individual titles at the CA state XC meet but Olivia O'Keeffe Davis HS joined big sister Fiona O'Keeffe ('13 and '14 state champ in Division I) as the third set of siblings to win state titles. The other siblings to win state titles are the Hall brothers from Big Bear (Ryan and Chad). Ryan Hall won the Division IV races in 1999 and 2000 while Chad Hall won in the same division in 2000. The other sibling duo also won their titles in the same year as Austin Fritzke and Katie Fritzke of Mt. Shasta won the Division V titles in 2004. Oh by the way, this was also Olivia's first cross country race victory during her high school career. Crazy!

9) St. Joseph Notre Dame scored two individual titles with Cooper Teare winning the boys race and fellow senior, Kiera Marshall winning the girls race. Teare won last year's race in an epic sprint finish against Jack Van Scoter of Flintridge Prep. The margin of victory, a mere .003, 15:07.313 to 15:07.316. This year, Teare left no doubt as he won the race by 40.8 seconds over 2nd place finisher, Evan Pattinelli of Flintridge Prep. Marshall, finished in 2nd place the past two state meets behind Sonoma Academy's Rylee Bowen but there was a new sheriff this season as Marshall continued her terrific season with another resounding victory in the girls race. The other set of teammates to win state titles in the same season other than the Fritzkes above are Bryan Dameworth and Deena Drossin (now Kastor) of Agoura in 1987 and 1989.

8) Nueva is a 4 year old high school with 2016 being the first year the school was officially considered a CCS member. The girls won the CCS team title along with senior Jake Lange, who won the individual title for the boys. At the California state meet, Lange finished in 7th place making the podium as a top 10 finisher. The girls added some more hardware as they surprised the field and coach Jeff Gilkey with a 3rd place finish, one point ahead of Lick-Wilmerding. An interesting note on Gilkey is that he ran on the Arroyo team that won the very first state Division I title in 1987 and was coached by the now Mt. SAC Invite and state meet announcer, Tim O'Rourke.

7) When you analyze all the team victories, I would say most of the favorites held court with Great Oak taking both Division I races, Claremont sweeping Division II, Palos Verdes girls holding form in Division III, Foothill Technology taking both state titles in Division IV and favorites Desert Christian and Flintridge Prep taking the boys and girls titles in Division V respectively. That leaves the boys' Division III race which offered the biggest surprise team victory of the meet. Cathedral Catholic from the San Diego Section were considered a top 10 team throughout the season. They finished in 6th place at the Mt. SAC Invitational Division III Sweepstakes race and finished behind La Costa Canyon at the SDS championship meet. Finally fielding their fully healthy lineup, Cathedral Catholic rolled to the state Division III title over Southern Section champs West Torrance and North Coast Section champs, Campolindo.

6) Saugus does it again. In 2013, the Saugus girls finished in 6th place in the CIF SS finals at the Mt. SAC course. The following week, a highly motivated Centurion squad almost shocked the field by taking 2nd place to Simi Valley 97 to 102. Shocked might be a bit strong considering the Saugus girls won 9 state titles before and after the lone 2nd place finish in 2013. Fast forward to this year and the Saugus girls made it a bit too interesting for coach Rene Paragas by finishing tied for 7th place at the CIF SS meet on the Riverside course and advancing to the state meet by winning the tie-breaker. Jim Valvano made the survive and advance motto famous with his 1983 NCAA championship team and Saugus did just that once again. Another 2nd place finish was quite satisfying after the near miss at the section meet for Saugus as they packed one more state meet trophy back home.

5) Since 1987, there have been three individual winners in the boys' Division I race hailing from Northern California. Jason Balkman, Lynbrook, won his title in 1994 running 15:15. In 1998, Justin Wilingham, Beyer, won the Division I title in 15:18. In 2003, Yosef Ghebray, James Logan, won his state title running the same time as Balkman (15:15). The 3rd NorCal individual winner took place this year with Luis Grijalva, Armijo, taking the Division I race with the fastest time of the day, 14:50.1. Grijalva continues his incredibly successful season this Saturday as he aims to qualify for the Footlocker National Meet. Following Grijalva, two more NorCal athletes came across the finish line in the top 3 positions. Section rival Michael Vernau, Davis, had the 2nd fastest time of the day with his 14:56.4 while Bellarmine junior, Meika Beaudoin-Rousseau, finished in 3rd place with a time of 15:09.7 for the unprecedented feat.

4) The NXN factor. Although some members of the CIF committee choose to ignore the national meet, it's influence has to be acknowledged. The top five individuals (boys and girls) are all enticed to race in Portland with free gear from a certain shoe company. The top runners in the state were spread out in different divisions which meant that some had to race more than the competitors in their own race. That made for some significant margin of victories that left several winners waiting patiently for the 2nd place finishers and beyond. Team wise, the schedule has been a factor before due to the rising temperature but that was not the case this year. The dreaded last race was run in still perfect temperature which allowed the Palos Verdes girls to also secure an at-large bid.

3) Ken Reeves built a cross country dynasty at Nordhoff winning a combined 11 state titles and 19 podium finishes. After 2001, Ken stepped down as coach and contributed his talents to the Mt. SAC Invitational and sharing his wealth of coaching knowledge at clinics throughout the state of California. Along with friend Bill Tokar, Reeves helped coach the Ventura girls to two state titles in 2003 and 2004. Foothill Technology came calling in 2014 and Reeves saw potential in the rapidly growing school. Cut to two years later and Foothill Tech wins both Division IV titles convincingly adding to the resume of one of the all-time great coaches.

1) This is not meant to be a count down list but at #1, I have Great Oak winning both Division I titles once again. This is the 3rd year in a row that the Wolfpack have swept the Division I races and much to the chagrin of many Division I teams, the end is not in sight. This is also the girls 6th title in the last 7 years. The boys have won the last 3 state titles and last year concluded their cross country season with an NXN title while their girls finished in 3rd place on the new, California friendly, course. Both teams will be racing once again this Saturday and looking for more hardware to add to their trophy case. The G.O. uniforms were upgraded for this state meet but the results were eerily similar as both squads rule California once again.

If you want to add other interesting takeaways from Saturday's meet, please feel free to share them in the comment section below.