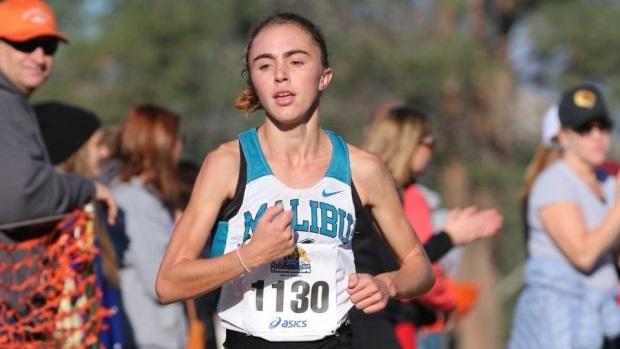 The Division IV individual favorites are clear cut - Claudia Lane and Callum Bolger - but the race for the team titles will be quite competitive.

Coach Ken Reeves built quite a dynasty at Nordhoff as his boys and girls accumulated 11 state championships (6 for boys and 5 for girls) along with 19 total podium finishes before he stepped down as coach in 2001. Foothill Technology opened it's doors in 2000 with 280 students. Students who wished to participate in sports had to participate for either Buena or Ventura while still attending Foothill. In 2011, the school surpassed 1000 students and began to field it's own sports teams. Ken Reeves was named as the Foothill cross country coach in 2014 and quickly built the cross country team into one of the best Division IV teams in California. At the 2015 California State XC meet, the Foothill boys (2 seniors, 1 junior, 3 sophomores and 1 freshman) finished in 5th place as a team. Foothill has been ranked in the top 3 in state all season and this past weekend won the CIF team championship over pre-meet favorite JSerra. Aside from finishing 2nd at CIF, JSerra won the Mt. SAC Sweepstakes Division IV race over the San Diego Section's top ranked team, Sage Creek. As we look ahead to this Saturday, Foothill will be slightly favored to win following their section victory. JSerra will be aiming to reclaim the top spot in this division and will need to leapfrog Foothill and stay in front of the hard charging Sage Creek boys, who finished in 3rd place last year at the California State Meet, with a team full of underclassmen. Also trying to make the podium will be the CIF 3rd place team, San Luis Obispo, CCS champion Greenfield as well as the NCS champion Bishop O'Dowd.

Most of the teams mentioned above will have an individual vying for a top 10 finish. The pre-meet strong favorite will be San Luis Obispo senior, Callum Bolger. He torched the SS final course at Riverside with the fastest time of the day at 14:26.5. He finished in 2nd place last year in the Division III state final behind Brea Olinda's Austin Tamagno. Chasing Bolger for the 2nd week in a row will be Foothill's #1 runner, Jared Rodriguez. He finished in 2nd place at the 2015 state meet and will have another tough foe in Bolger to surpass this year. Also in the mix will be Salesian senior Joseph Garcia, JSerra's super freshman, Anthony Grover, King City's senior, Roman Munoz as well as NCS champion and runner up, Ryan Cutter of Hercules and Kellen O'Neill, Arcata.

JSerra coach Martin Dugard is also a New York Times best selling author. As a cross country coach in California, Dugard has been equally as successful with his girls taking the Division IV state team titles in 3 consecutive seasons from 2010-2012. They are favored to win once again this year after several near podium finishes in the past few seasons. They won last weekend's CIF meet over another top ranked team, Foothill Technology and were also Mt. SAC Division IV Sweepstakes champions over the top ranked team out of the SDS, Coronado. The defending state champion Bishop Amat girls, finished in 3rd place at CIF and will be hoping for the same good fortune that led them to the title in 2015. The Mayfield girls have had several podium finishes in the past few seasons and will be in contention once again. The CCS champion Santa Cruz girls finished in 2nd place last year and will be aiming for a top 5 finish this year. The Miramonte girls seem to be getting healthy at the right time and will be heading into this meet as the NCS champions. Like the Santa Cruz girls, it appears they would also be thrilled with a top 5 finish.

Callum Bolger will be an overwhelming favorite in the boys race and Claudia Lane, Malibu, will be just as big of a favorite in the girls race. She has raced in some of the biggest races in California and remains undefeated against state competition. Her lone loss occurred at the Woodbridge Invitational as she finished in 2nd place behind Brie Oakley of Grandview, Colorado. Cassidy Haskell, Miramonte, was the fastest non-senior at the 2015 CA state meet with a time of 17:37.3. Bishop Amat will have two contenders with Olivia Paez and Trinity Ruelas. Nadia Tabrizi of JSerra, finished in 2nd place behind Lane at CIF and will be battling for valuable team points. Foothill Technology have their own contender with sophomore, Lauren Kearney while Mayfield will counter with fellow sophomore, McKenna Smith. The top 3 girls from the CCS meet will all contend for a low finish and they are Natalie Novistky, Sacred Heart Prep, Mari Friedman, Santa Cruz and Niki Iyer, Harker. The SJS champion, Cassi Land, Sonora, finished in 7th place at the 2015 state final and will be aiming for a higher finish this year.
Tweets by MileSplitCA