By Campolindo coach, Andy Lindquist. There will be some missing runners due to tests and college visits but there will still be some great varsity competition as you will see below. You can also find all the varsity entries of the meet courtesy of Hank Lawson at this LINK. 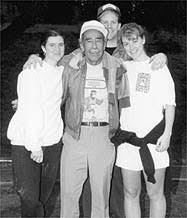 The 31st edition of the Ed Sias (pictured to the left) Invitational promises to once again deliver top notch performances from some of the best teams and individuals in Northern California. Below are previews for each varsity race:

Varsity Boys Small School 10:40AM:
An interesting individual battle highlights the small school boy's race as last year's 2nd place finisher Nick Downs of Bishop O'Dowd and Cooper Teare of St. Joseph Notre Dame face off. Downs seeks to improve upon his 10:14 performance from a year ago and move up on the all-time list. Teare comes in looking to keep his momentum going from a stellar track season that saw him advance to the state meet in the 3200m so look for an exciting battle between the two. A potential sleeper in the individual competition is senior Chris Morzenti of Mt Shasta, who has shown well here before and is on a big upswing after a great spring track season. In the team competition look for the DFAL trio of Miramonte, Acalanes, and Campolindo to square off for the top spots, with the host cougars looking to take home the team title for the first time since 2010. Senior Jonathan Semenza, who finished 12th here a year ago seeks to improve upon that performance and crack the top 10 while fellow senior Nathaniel Sauerberg looks to give Campolindo a dangerous 1-2 punch. Not to be counted out are strong teams from San Rafael and St. Joseph Notre Dame. Vista Del Lago will be making the long trek down from Folsom and could be a factor behind standout Remington Breeze, who has already shown well in recent early season outings.

Varsity Boys Large School 11:05AM
Monte Vista, Dublin and De La Salle square off again in a repeat of last year's thriller which saw Dublin prevail by a slim margin. Look for another close race this year as Monte Vista comes in hot off a great team performance at their home invitational earlier this week, with Junior Tristian Miller leading a strong contingent for the mustangs. Pacing Dublin will be Junior Anirudh Surapaneni who showed great promise during the past track season and should be in the hunt for the individual win here. Maria Carillo also brings a strong team to the proceedings with Jordan Scobey leading the pumas while a potential dark horse can be found in Santa Rosa, which courts an exceptional 1-2 in Luca Mazzanti and Daniel Pride.

Varsity Girls Small School 11:30AM
This one appears to be wide open individually as last year's champion; Chloe Hansel of Las Lomas will not be attending the meet this year. It appears that Jourdan Amen of Bishop O'Dowd and Keira Marshall of St Joseph Notre Dame, who both finished in the top 5 last year, will battle it out for the top spot. Also in contention are Hana Sun of Campolindo and Sarah Anderson of Vista Del Lago. Team wise it appears that Bishop O'Dowd has the slight edge going into the meet as they return a sizable portion of last year's squad and will look to retain their team title from last season. The aforementioned Vista Del Lago and Campolindo should also be in position to land in the top 3 while the always strong Lick-Wilmerding looks to make some noise as well.

Varsity Girls Large School 11:55AM
This one figures to be an exceptional team battle as nationally ranked Bella Vista heads down to the bay area to face off against an incredibly strong Monte Vista team as well as a swiftly rising Granada team in addition to the always strong St Francis. Bella Vista is led by footlocker finalist Kendall Derry who will also attempt to take home the individual title from defending champ Megan McCandless of Granada. While Monte Vista will be shorthanded this weekend, they still have enough depth to be in contention for the team title as Madalyne and Audrey Coney, along with Meredith Corda give the Mustangs plenty of upfront firepower. In addition, Santa Rosa standout Delaney White will also be in the hunt for top individual honors.