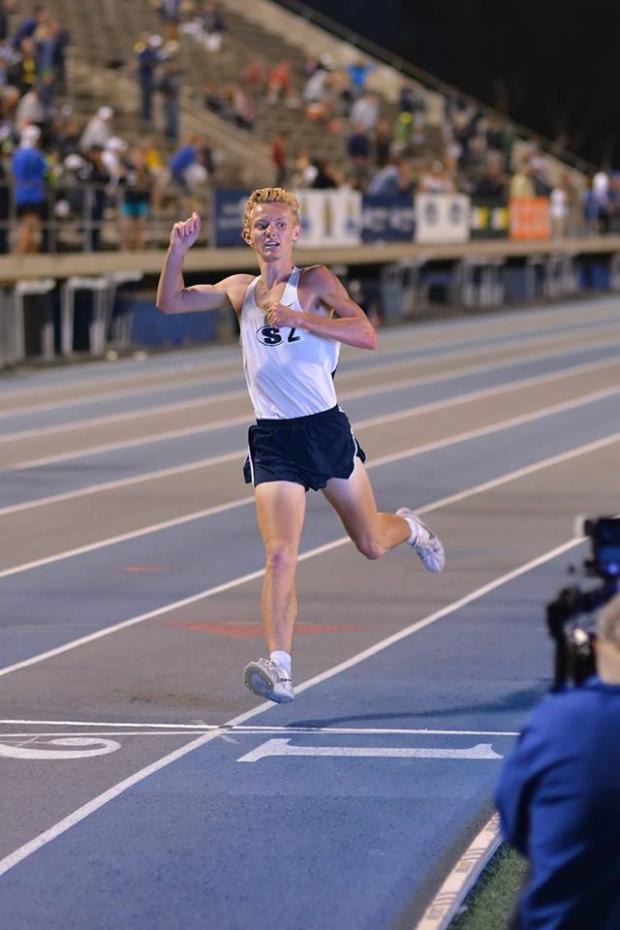 Brian Zabiliski of Saugus, Calif. dropped an eight-second personal best of 8:49.38 to win the 3200m at the CIF Southern Section Masters last weekend. The win ranks the Columbia University-bound senior No. 1 in the state of California and No. 5 in the U.S. this spring. This weekend, Zabiliski will go for his first state title in arguably the most competitive state in the nation.

1) When did you first start running? What other sports did you do aside from cross country and track and field (Joe Cagnon photo above from SS Masters meet)?

I first started running in the summer before my freshman year. Before running, I was a gymnast and played football, but realized I wasn't going anywhere with those.

2) What do you remember about your freshman high school experience on the cross country and track and field teams? Proudest accomplishments? Who were the runners you looked up to as a freshman and helped mold great habits for you?
I remember being told I was talented, but nowhere near the best. It was an entirely new experience from all of the other sports I played. It was nice, nothing was formal or authoritative like football. My proudest accomplishment was setting the freshman 3200m record in 10:00, which retrospectively doesn't seem that fast now, but was a huge deal then. As a freshman, I looked up to my teammate AJ Yarnall, as well as professional distance runners like Galen Rupp and Mo Farah.

3) You continued to develop as a sophomore and junior. What do you feel were the biggest changes that you made that had the most impact on your improved running?
I started to take the sport more seriously during sophomore and junior years. I fixed some fundamental problems in my training like diet and rest. I put the video games aside and actually decided to lift some weights and go to afternoon practices. I surrounded myself with the varsity team because that's who I wanted to be, and soon enough I was switched into their training group and rolled with it.

5) Heading into your senior XC season, did you do anything different over the summer? What were your goals heading into the season and what do you feel were your best races?
This past summer I focused primarily on hitting high mileage rather than workouts. Although i did end up doing many workouts throughout the summer, they weren't the key to getting better, but rather the 10-18 mile days I'd have after them. Going into this season, the primary goal was to be named state champion in division 2 in XC, and then qualify for a national meet. My best races this season were probably the Woodbridge Invitational (14:14) and CIF State championships (15:07 5k, 1st place finish).

6) What does a typical week look like for you during the track season in terms of training with a Saturday race? Weekly mileage? Pace of regular runs? Distance for longest run? Any double days? Weights? Anything else that you feel helps you?
With a race Saturday, typically our longest run will be Sunday which normally ranges between 12 and 16 miles, depending on how far along we are in the season. Following the long run is most likely a speed workout Monday, typically some sort of cut-down, ladder, or other short interval workout. Tuesday is most likely a normal recovery day, which normally adds up to around 10 miles at a decent pace, 6:15-6:45 most of the time. Wednesday is most likely another workout, this time longer intervals. Thursday is a repeat of Tuesday, and Friday is easy, 7 or less miles. With the race Saturday included, this totals between 60 and 70 miles.

7) Tell us a little about your coach and how he has helped you develop into the runner you are today.
Rene Paragas, my coach, has done an excellent job in helping me progress to where I'm at today. He organizes every mile I run, fitting to his "formula" for success, primarily for the postseason. He's taught me the ropes in just about everything about the sport, everything from how to stay healthy to what paces to run on certain days. He always has the master plan, something I could never understand, but somehow it always worked and we always got better.

8) Looking back at your race this past Friday, what was your plan going into the race and how did the race unfold for you? What was your reaction at seeing your final time?
We knew the leaders of the race would likely go out hard, so we decided that with such a talented and small field I might as well go with them and try to hang on, while at the same time having a big finish. The race turned perfectly in my favor, I found a nice spot right behind the leaders for the first 6 laps and simply zoned out, let the race take me. We started off pretty hard for a 3200 (4:20 pace), but once we settled it was easy to stay relaxed and under control, running consistent 68 second laps. At 600, I knew that in order to win the race I'd have to start my kick early and try to stick with it, so I took the lead, pulling away at 500. From there all I could do was sprint, but going into the last lap felt very relaxed, so I was able to close in a 60. I was in pure amazement when I saw the final time, I had absolutely no idea I could run that fast.

9) The state 3200 meter race seems to be the premier distance race. What are you most looking forward to for next Saturday at Buchanan HS?
I'm most looking forward to trying to redeem myself for my performance at state last year. Following a mediocre 14th place finish, I believe I have a good chance at making podium, but I look forward to the incredible competition that I'll be running against for such an honor.

10) You are attending Columbia next year. How did you go about deciding on Columbia and what other schools did you consider?
Columbia always stuck out to me as a place of both academic excellence and athletic prestige. After visiting there, I learned that not only was the place highly esteemed, but also that the team I'll be competing with is also very fun and friendly, so I pretty much based my decision off of the enjoyment of the trip. The other schools that stuck out to me were Stanford and Georgetown, for the same reasons as Columbia.

11) From your perspective as a four year high school runner, what would you say are the key components to being a highly successful runner?
Stay healthy! I constantly see teammates and competitors amount to something just short of their potential due to injury or illness. If you want to be successful, you need to be responsible and run in a way that won't hurt you, giving yourself uninterrupted training and staying consistent are the keys to steady progression throughout high school.

12) Anything else you would like to add.
I would just like to thank everyone that has helped me get this far - the coaching staff, teammates, family members, and friends that have always supported me throughout this journey. It has truly been an amazing past four years and look forward to many more years to come.