MOORPARK -- It was almost as if time was suspended, with all of us looking at each other to gather our senses ... 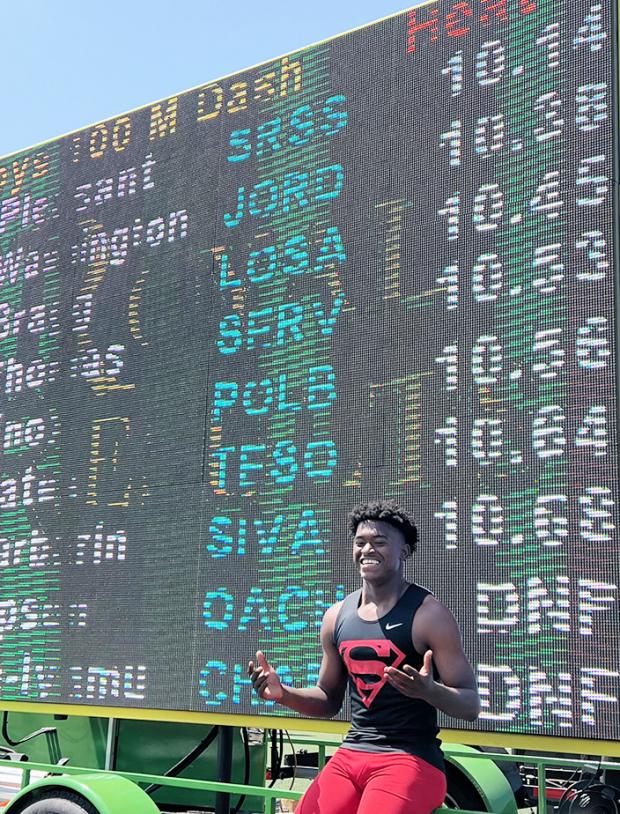 It took some moments of gathering oneself, but indeed, Serra junior Rodrick Pleasant, with confidence abound, shattered one of the oldest California high school track and field records out there!

He did not just break the record - he obliterated it!

All of the all-time best in California sprint lore now step aside as the unfathomable took place with the junior catapulting himself ahead of some of the fastest we've ever seen!

Last June, Mater Dei's Domani Jackson tied the old state record for the event (10.25) held by Henry Thomas of Hawthorne in 1985 - both now step down from that perch.

And Pleasant did this after anchoring his 4x100-meter relay squad to the 41.14 victory. He returned to the event where he also scorched the track for the 200 meters.  As if he was 'saving some for next week,' he motored once again to the victory in a wind-legal 20.49, seemingly preparing himself to go after Michael Norman's 20.14 state record next week at the California State Championships!

After a two-year hiatus, the CIF-Southern Section Masters Meet returned, this year at Moorpark High Schoo, with the section sending six automatic qualifiers in each event, plus a slew of at-large entrants also representing the largest section in the state at next weekend's CIF-State Meet at Veterans Memorial Stadium in Clovis.

Pleasant provided all the fireworks imagined on this afternoon, where a continual cross-wind ensued all throughout lending itself to a breezy day but yet witnessing most sprint and jumping marks to be wind-legal.  With that, there were so many more top highlights!

After capturing the boys Division 1 team title the week before, the Highlanders of Upland positioned themselves perfectly for a run for the CIF-State team title. In unprecedented fashion, Upland qualified THREE individuals in BOTH hurdles. Kai Graves-Blanks looked sharper than ever with a wind-legal 13.75 (No. 13 all-time in section history), with DeQuan January and Davis Davis-Lyric also qualifying. KGB came back for a runner-up 37.74 effort in the 300-meter hurdles, second only to his teammate, senior Delaney Crawford -- who continues to look stronger every week, crossing to state-leading 37.23. Lyric also advanced in the 300 Hurdles.  With Christopher Coats advancing in the 200- and 400-meter races, plus their 400-relay squad, Upland has placed itself as the favorite going into next weekend's festivities!

After easily capturing the Division 2 team title last week, Golden Valley's girls are also well-positioned for some State Meet hardware as well!  Whereas injuries hampered the group a year ago, the Grizzlies are only getting stronger this postseason run. Senior Kylee Davis flew to a state-leading wind-legal performance of 20-4.5, moving her up second in the nation. All the while, he coordinated the series during her qualifying for the High Jump at the same time as her teammate, sophomore Meagan Humphries put on a show there with a lifetime best of 5-9 while also advancing in the long jump (18-10) with Davis. Junior Adonijah Currie cruised to the fastest time in the state (23.45w) for the 200 meters, establishing her as the favorite in the event next weekend. Meanwhile, the girls opened up the day on the track by improving their state-leading mark for the 400-relay to 45.98.  Also on that relay, Ta'Ahjah Fann qualified for the 100 meters.

Also representing the Foothill League, West Ranch senior Christopher Goode continues to improve, running away from a talented field in the 400 meters.  Improving his already state-leading time down to 46.75.  With Marshall senior Logan Davis placing second at 47.31 and Cathedral senior William Mullins (47.47) third, this was the first time in CIF-SS Masters Meet history that six boys all eclipsed the 48-second mark as seven in all, advanced to next weekend.

Other headliners include Cajon's Seth Johnson. The senior is the sole representative from the section to qualify in four events!  He ran the third leg of their runner-up squad in the 400 relay (41.66), placed fourth in the 110 hurdles (14.16), and clocked in for a 6-6 qualifying effort in the high jump before leading off their 4x400 relay squad, that placed fifth.

Reflecting back to that historic 100 meters, Long Beach Jordan's Jordan Washington placed second in a new wind-legal lifetime best of 10.38, just off the sophomore-class record (10.32) held by Pleasant from 2021.  But, more history was created by Los Alamitos freshman Devin Bragg as he established a new Freshman state record of his own for the 100 meters.  The previous best was held by St. John Bosco's Rayshon Luke (10.55) from the 2019 State Meet. Long Beach Wilson junior Aujane Luckey will represent the Bruins in four events next weekend.  She closed strong for a lifetime best of 53.83 to capture the 400 meters and placed third in the 200 meters (23.82w) while also representing both qualifying relay squads.

Orange Vista junior Kailah McKenzie is only one of two athletes in the Southern Section advancing in THREE individual events, capturing the 100 hurdles (14.02w) while also advancing with a third-place effort in the long jump (19-6.75).  She was also one of nearly a dozen girls to meet the 5-5 at-large standard in the high jump.

In the girls' field events, behind Golden Valley's Davis' performance in the long jump, Mission Viejo junior Emily Psarras measured out a lifetime best of 19-7.75 while ten girls altogether advanced under the state at-large standard.

With 11 girls all meeting the at-large standard in the high jump, Katherine Porter of Los Altos elevated up over the 5-7 bar for a new lifetime best while LB Poly's Zharia Taylor (5-7) also advanced with her freshman teammate, Jillene Wetteland to keep Poly in the conversation for the state team title (more on that topic later).

After a dubious start, missing both opening attempts at 11-9, Vista Murrieta sophomore Aspen Fears turned it around and cleared 13-3 for a new lifetime best to capture the pole vault while Southwestern League rival, Madisyn Negro of Murrieta Valley took second at 12-9.

With most girls passing up their final three attempts, Mission Viejo's Jada Gatlin captured the triple jump with a 40-2.5 wind-aided effort on her second jump.  ML King junior Alyssa Hope advanced on her second jump measuring out to a 39-10.25w after also qualifying in the long jump earlier.

In the girls' shot put, Sherman Oaks Notre Dame freshman Aja Johnson uncorked a two-foot lifetime best to win the event at 43-6.  Teammates Hope Gordon and April Fontenette also advanced but, unfortunately, the trio had a tougher time in the discus.  On her second throw, Los Alamitos' Taylor Hofland threw out a 12-foot improvement upon her previous lifetime best to eventually capture the event at 139-7.  Notre Dame's Fontenette placed second at 139-3. Transitioning to the boys' throwers, Murrieta Mesa senior Cade Moran advanced to the State Meet in both throws, with the win in the shot put (66-1) while placing second in the discus (188-4). With this being one of the stronger groups of discus throwers in section history, Hesperia's Jordan Franco placed fourth with an effort of 188-4.  With Golden Valley's Terraine Wiggins improving out to 196-10, and eight boys qualifying to the State Meet, all eight have measured out over 183 feet this Spring!

In a day with the high jump apron witnessed marked improvement all around, Mater Dei freshman Brandon Gorski elevated up over the 6-8 bar for a lifetime best, earning a trip to State along with his underclass teammate, Logan Lyght, who had placed second in the 110 hurdles.  Gorski is the only freshman in the nation to clear that height.

In the pole vault, California state leader, Hunter O'Brien of Roosevelt, won with a 16-5 performance while working a bigger pole aiming toward a potential 17-foot challenge next week. In one of the step-up performances of the meet, ML King sophomore Jaden McKee had only cleared the 14-foot bar on three occasions but on this day, cleared 15-5 to place second.  (As he did to O'Brien at the Big 8 League finals three weeks ago).

It only took one jump, but St. John Bosco's Camryn O'Bannon captured the long jump with a 23-9.75 effort.  With Great Oak senior JC Stevenson and Golden Valley senior Elijha Ellis also advancing. Ellis returned to take the triple jump with an effort of 48-1.5w.  All three qualified in both horizontal jumps as did Elsinore's Elijah Yoshinaga. Moving back to the track in the distance events, Newbury Park senior Samantha McDonnell was our only girl to capture two events on the day, both with controlled victories in the 1600 (4:49.19 with a 66.6 last lap) and 3200 meters (10:30.15).  In the latter, she controlled the entire race, coming through with Oaks Christian sophomore Payton Godsey at 5:20 and coming back with a 5:10.

In that 1600 meters, the conservative opening laps (2:31 through two laps) seem to certainly doom those working to make the at-large standard but the field responded, fighting off the winds on the backstretch and seeing seven girls all close in under 4:53.  Chino senior Mia Chavez closed with a 4:50.33 runner-up finish, with Ventura frosh Sadie Engelhardt cruising in at 4:51.32.  Canyon senior Emma Hadley (4:51.39) and Mira Costa senior Dalia Frias both return to the State Meet, as both were among the few qualifiers in 2019 as freshmen. Aside from the talent field, Frias had to fight off a bout of food poisoning from the night before as well. Thacher senior Ellis Delvecchio never left any doubt as he raced to the front in the boys 800 meters before holding off fast charging Jai Dawson (1:51.13) of Dana Hills and Newbury Park junior Aaron Sahlman (1:52.08) for the 1:51.11 win.

In a race where the majority of the field worked together, eight boys advanced to the State Meet for the 3200 meters.  After a tough race where he almost did not qualify a week earlier, Newbury Park senior Daniel Appleford rolled home with a 58.7 last lap to cross at 8:58.85.  The Panthers stalwart, who often was overlooked by the media during the program's record-setting cross country season in the fall, came through seventh at the halfway point before closing with the 4:33-2:26 victory.

Millikan sophomore Jason Parra did most of the early work up front and placed second (8:59.87) while Highland junior Matthew Donis continues to impress with another lifetime best of 9:02.49. West Ranch junior Bille Issa posted another personal best at 9:02.49 while Big Bear senior Max Sannes patiently sat back the first half before coming back with a negative-split 9:02.74 effort.

Working our way back to the sprints, Pleasant was NOT the only sprinter from Serra to shine. Placing themselves into contention for a possible State team title next weekend, Jordan Washington and Brazil Neal continue to make it look easy as they placed 1-2 in the 100 meters with 11.64w-11.73w performances.  Both returned to also qualify for the 200 meters as well after leading their squad to a 46.19 in the 400-relay, moving them up to second in California.

Redondo Union's Eve Divinity as the only three from the section to qualify in both the 100 and 200 meters.  The Redondo senior also advanced in the long jump with a wind-legal 19-3 effort, joining Orange Vista's McKenzie in that accomplishment. Monrovia senior Madeleine Conte recorded another solid afternoon with her lifetime best effort in winning the 300 hurdles (43.33) to move up to fourth in the state. She also advanced in the 100 hurdles with a second-place effort (14.26w).

Other girls to advance in two individual events on the track were Roosevelt senior Naomi Johnson (200 and 400 meters) and Thousand Oaks senior Lauren Thai (100 and 300 Hurdles).

Also qualifying in two events on the track, LB Poly's Jaelen Knox and LB Jordan's Washington advanced in the shadows of Pleasant's accomplishments.  Meanwhile, St. John Bosco's Jaden Smith join Upland's Coats and Marshall's Davis in both advancing in the 200 and 400 meters.

Capping off the return to the track for the CIF-SS Masters Meet, Cathedral, with Mullins on anchor, came from behind to bring home the victory to recapture the California state lead in the 4x400 relay in 3:13.98.