Chico senior Mario Giannini (140 in read) is pictured early in the race during Wednesday's CIF-Northern Section Championships in Cottonwood. Giannini went on to win a second consecutive section title while also running the third-fastest time in course history. (Photos courtesy of Scott Giannini)

Senior Tryon Jardin led the way for Pleasant Valley, which earned the first of two automatic entries from Division III into the State Meet. Chico will also advance. 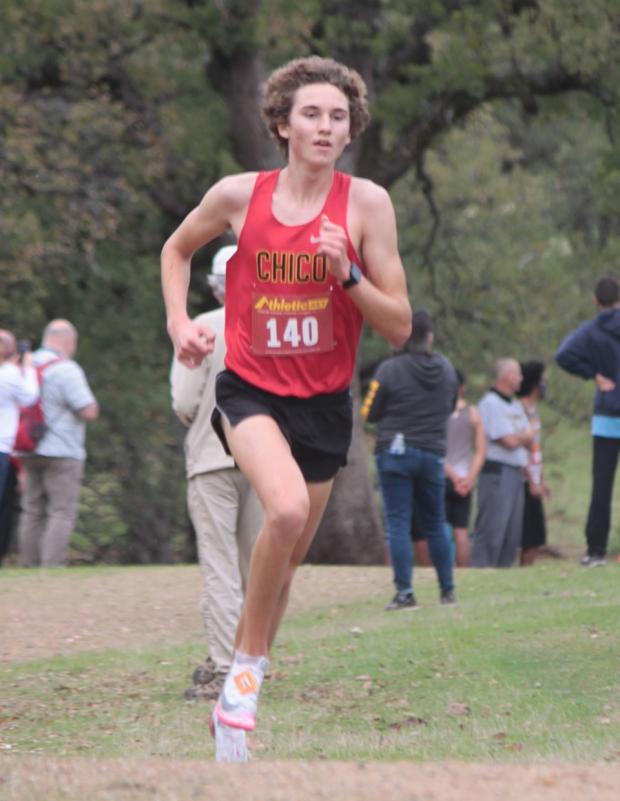 In the girls race, the Molina Twins, Della and Iresh, went 1-2 in leading Chico to a definitive victory. Iresh won the section title in 18:44.97 with Della a few ticks back at 18:46.40. Chico earned the only automatic entry from Division III for the State Meet.

University Prep senior Becca Gaido was third overall in 19:26.85, as the winner of the Division V competition. She was the overall runner-up as a sophomore in 2019.

The Northern Section runs just two varsity races per gender at its championship meet, and then sorts through to identify the winners of Divisions III, IV, V, and VI. Yes, even though the state does not have six divisions, the NS awards winners of the smallest school division but then lumps D-V and D-VI together to determine qualifiers for the State Meet. The section is allotted two State Meet berths for Division III boys, Division IV boys, and girls, and one team spot for D-III girls, and D-V boys and girls.

In the boys competition. Henry Baun of Yreka was fourth overall in 16:36.40, claiming the D-IV title. Mt. Shasta's Drew Hering was next in 16:43.27, as first across among D-VI runners. University Prep's Noah Gaido went 16:59.99, eighth overall and first among D-V runners.