A year ago, this facility produced a national record when New York's Leah Pasqualetti cleared 14-08.25 at the same competition that Paige Sommers of Westlake HS in Southern California also went over 14 feet. That was the first time two high school girls had cleared 14 feet in the same competition.

On Saturday night, representing Northwest Pole Vault, the Moll twins, and Neiders each cleared 14-00. Amanda Moll was declared the winner of the Elite Girls Division with Hana Moll second, and Neiders third. Amanda cleared on her first attempt, Hana on her second and Neiders on her third. All three then attempted 14-06.

Avril Wilson, also of Northwest Pole Vault, was fourth with a clearance of 13-00.

The Moll twins are rising juniors at Olympia (WA) Capital HS and rank Nos. 2 and 4 in the U.S. this season. Hana was The Outdoor Nationals champion at 14-04. Amanda cleared 14-07.25 in early June at an open meet in Chula Vista, CA, improving on her sophomore class national record. She had set the freshman class outdoor and 15-year-old age group record, as well the 16-year-old record, breaking the record Sommers had held of 14-6.

Amanda Moll seems poised to threaten the national record set this spring by Sommers, first at 14-08.50 and then 14-09. That record has been broken each of the past three years.

It was a pole vault season where nine girls cleared at least 14 feet, the national record was broken twice, two sets of girls cleared 14 feet in the same meet, and now this trifecta.

Hana Moll and Neiders each went over 14-00 at Outdoor Nationals. The other set was when Ashley Callahan (Rancho Bernardo HS) went 14-06 (U.S. No. 3), and Allison Leigh (Del Norte HS) went 14-00 at the CIF-San Diego Section Division 1 Finals. 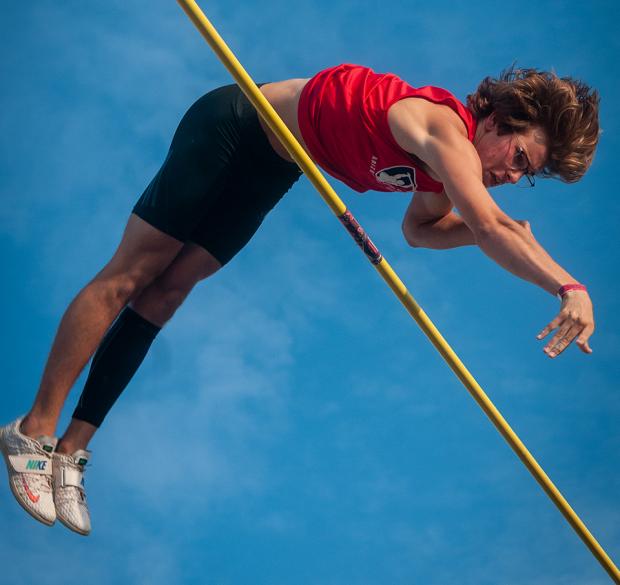 Kelley cleared his winning height on his second attempt. He then made three attempts at 17-04.50.

Kelley is a rising senior and Arizona state champion from Chandler Valley Christian. He had recently cleared 17-0.75 at a USATF Youth Meet some four weeks after tearing the meniscus in his knee while competing in the long jump at the state final. He won the AZ title at 16 feet in mid-May, a week after hitting his then-PR of 16-08.75. He's now twice over 17 feet this summer.

Addison Kleinke, a seventh-grader from Eugene competing unattached, won the middle school girls division at 12-00 with Audrey Cheng of Fog City Flyers second at 10 feet. Cheng is a rising ninth-grader from San Francisco who will attend The Lawrenceville School in New Jersey.

A pair of eighth-graders, Logan Meredith of Trojan Army and Khaliq Muhammad, competing unattached, each cleared 13 feet with Meredith getting the victory in the middle school boys division.