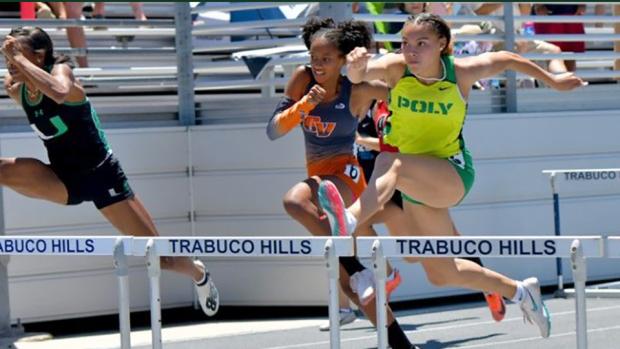 MISSION VIEJO -- For the first time in meet history, Trabuco Hills played host to the CIF-SS Division 1 Finals. In a year, headlined by continuous uncertainty, all four divisions hosted the finals at the same sites like that of the preliminaries. In a MUCH more condensed schedule than ever experienced at the championship level, challenging even the strongest athletes competing, one could not help but reflect and appreciate how this opportunity did not take place in the truncated 2020 season.

Favored to claim their unprecedented 20th CIF-SS Division 1 title, Jade McDonald provided the foundation for Long Beach Poly's 2021 championship run. In 2019, Roosevelt was able to claim the title over Poly on the last event. In 2021, that was not to be as a dominant and balanced attack from Long Beach Poly clinched the 60-42 title before the final three events.

Slated to earn an eye-popping 34 points, McDonald's day started roughly in scratching three of her four jumps in the long jump. Her one legal jump yielded her a third-place medal, but she bounced right back with a lifetime best of 40-2.50 to claim the title in the triple jump. All the while, McDonald ran over to take home the victory in the 100-meter hurdles in a wind-aided 13.89. Under all conditions, this was also a lifetime best and first under 14-seconds.

With the condensed schedule and mid-June temperatures, it may have taken a toll in the 300 hurdles as she was even on the sixth and seventh flights, but crossed with a third-place finish (43.86). Overall, McDonald earned her squad 32 of their 60 points. McDonald graduates as one of the more decorated prep athletes in Southern Section history with earning four gold medals, three silvers, and three bronze over the course of her career, despite only competing in three postseasons!

Early on, Poly had only six of the originally projected 17 points we had slated in the long jump and 400 relay. A mismanaged first exchange left Poly with a DQ in the relay.

But, McDonald set everybody back in order along with Aniyah Wyche earning the runner-up medal in the 100 meters (10.96w), and Destiny Okoh finishing two places higher than projected with her 131-2 lifetime best in the discus. Junior Zharia Taylor had been the only girl in the division to clear the 5-6 in the high jump and she lived up to the billing in matching it, yielding her squad 10 additional points. In this century alone, Poly's girls have earned fourteen titles and six runner-up performances as further evidence of the program's continued dominance.

On the boy's side, the Moore League would not be denied! As the ever-fluid situation with our rankings had been consistently adjusted on a weekly basis over the past month, we had Upland as the favorites for most of the season. Solely driven by points in the distance events, Newbury Park was a close second. With Newbury Park opting out and taking its top talent to compete out of state, Upland then saw its top star, Delaney Crawford, fall victim to a hamstring injury during last week's prelims.

With that, Long Beach Poly was back in the picture to defend its 2019 team title! But, the Jackrabbits were not alone as Great Oak, Long Beach Wilson, and Cajon posed strong challenges while Upland was still in the fight but was going to need some help along the way.

As advertised throughout the meet, going into the last event of the 1600-relay, Great Oak and Long Beach Wilson were tied at 42 apiece with Long Beach Poly in striking range at 39.  Wilson came into the event as the California state leader but more importantly, the Bruins had somebody nobody else had -- Phillip Jefferson!

Jefferson became a part of history earlier with victories in the 400 meters (48.28) and the 300-meter hurdles (37.73).  Joining La Sierra's Reggie Wyatt (2009), Jefferson brought home 20 crucial points for his Bruins! Keep in mind that Jefferson is also one of the division's top 800-meter athletes and that aerobic strength came into play in pulling off the rare and, some would argue, toughest doubles on the schedule.

To highlight this accomplishment, let us provide additional context. At the California State Meet, Jefferson would have had 80 minutes in between events in the early evening whereas here, in temperatures that hovered in the mid-80s in the brightest part of the day, Jefferson accomplished the feat in less than 50 minutes! The University of Iowa is smiling as Jefferson and Poly's McDonald will be competing in the familiar black and gold Hawkeyes uniform in 2022. Back to the final, championship-deciding 4x400 relay! Jefferson's teammates, all underclassmen, spotted him a comfortable lead going into his anchor leg of the 1600-relay where he only extended it crossing in 3:15.26, improving upon Wilson's California State best by over two seconds.

While watching their female counterparts rack up a number of plaques over the last several decades, this was the boys' first team title since 1992 as they outlasted Poly, 52-47 in the overall team scoring with Great Oak coming up third with 43 points.

Coming into the day, we had Wilson projected three points shy of Long Beach Poly. But Poly earned seven fewer points in the long jump than slated in our pre-meet dope sheets, and was playing catch-up to Wilson and Great Oak from there on out. into the postseason with a 1:58.57 best and not projected to advance to the final, the sophomore came home with a 1:55.11 effort to place third and earn six points for his squad in the 800 meters.

Also garnering headlines on the day, Rancho Cucamonga's Tristyn Flores anchored his state-leading 4x100 meter relay squad to victory in 41.27. Favored to capture the 100 meters, Flores left no doubt in leaving the field with 40 meters to go in a wind-aided 10.35 showcase. This was the third-fastest time in Division 1 history and second-fastest all-time for wind-aided marks. Flores ended his day with a runner-up finish to Harness in rolling to a 21.22w lifetime-best effort.

After a long and celebratory Friday that included graduation and prom, Crescenta Valley's Mia Barnett earned her third CIF-SS divisional title in the 1600 meters, running 4:42.89. (Barnett had earned the Division 4 title in the four-lap race in 2018 and 2019). She just fell short of the all-time divisional record and wisely shut it down for the remainder of the afternoon. As the public announcer made notice of, Barnett has put in arguably the greatest season of any female prep in California history. Her historic senior campaign not being done, she will compete in several weeks on July 2 in the mile one last time before heading off to the University of Virginia.

Westlake senior Paige Sommers made it official by earning her divisional title in the pole vault. While in Division 2, she won titles in 2018 and 2019. Saturday, she broke her own Division 1 record, established last week at prelims, in elevating over 14-feet to capture the event. With all nine girls clearing 11-3 and three others up over 11-9, this was one of the deepest fields in Southern Section history.

A great competition in the boys pole vault also ensued.  Burroughs (Burbank) senior Eli Gault-Crabb, a finalist in 2019, erupted from a 15-9 lifetime best to a 16-6 victory to claim the 2021 title!  This tied the third-best all-time mark in Division 1 history.  Los Alamitos' David Brok earned the silver in matching his 15-9 lifetime best.  This was the few times in meet history where two boys elevated up above the 15-9 bar.

Sophomore Kai Graves-Blanks reminded us all of the underclass hurdling dominance we witnessed from Upland this 2021 season! Chasing Cajon junior Seth Johnson from behind, Graves-Blanks leaned forward for the win over the last 10 meters. In one of the fastest races in Division 1 history, his 14.02 is the seventh-fastest in divisional history with Johnson just outside the top 10! Five of the top seven in the event are underclassmen in that 110 hurdling affair. Meanwhile, Graves-Blanks returned to place third in the 300 hurdles. Downey's Ugonna Ikejiofor had another solid showing in capturing the discus in 182-7. The California state leader cranked out a 188-9 in prelims, moving him up to fifth on the all-time Division 1 list.  State leader in the shot put, Murrieta Mesa junior Cade Moran earned the title (59-5.5) and also placed second in the discus (172-11).

In the girls' throws, Trabuco Hills' Abby Klinge pulled off the upset in capturing the discus (139-6) while Lakewood's Cherish Washington earned the title in the shot put (43-1) after taking second place in the discus.

Vista Murrieta's Darius Hill came into the action the favorite to capture the long and high jumps. But Ayala's Marcus Monroe had other plans. On his last jump, Monroe reached to claim the title with a lifetime wind-legal best of 22-6.50.

Along with Cajon's Johnson, the three navigated the event with high jump at the same exact on opposite aprons of the stadium. In one of the better competitions in recent memory, Monroe (coming in with a best of 6-6) matched Hill all the way up over the 6-10 bar in the high jump. Coming down to misses, Hill defended his 2019 title. With Johnson taking third. He earned 22 points on the day as an individual.

With McDonald capturing the triple jump, Great Oak senior Summer Stevenson settled for second after earning the title in 2019. She also earned the runner-up medal in the long jump earlier.  But, on the opposite runway, her younger brother JC Stevenson was busy carving his name into the record books. With that, JC becomes the fourth Stevenson sibling to earn Division 1 triple jump titles in the event since 2016!

Reflecting back to the 1600 title earned by Barnett, Mira Costa's Dalia Frias closed in over the last 200 meters to finish in 4:46.34. With this being the fastest runner-up performance in division history, Frias became only the sixth girl to break 4:47! With Saugus' Hannah Fredericks also crossing with a lifetime best (4:50.38), this was only the second time in divisional history that three girls broke 4:51 in the same race. Fredericks returned later to claim the title in the 3200 by surging into a 68.6 last lap to run away to the 10:40.96 victory and further continue the legacy that Saugus distance running has put forth over the past 15 seasons!

In the 800 meters, the top two from the Orange County Championships from last month hooked up in an epic battle down the straightway once again. With Katella's Ashlynn Viramontes leading for most of the second lap, Fountain Valley's Kaho Cichon retained form to pass with 20 meters to go for the 2:10.87 lifetime-best victory. Viramontes improved by almost two seconds in her 2:11.47 runner-up finish.

In the boys 800, Great Oak's Mateo Joseph shot straight to the lead in knowing that he had to hold off fast charging teammate Kyle Reden. Reden's patented kick was put on full display once again but this time, Joseph held on with the 1:53.58-1:53.88 victory to bolster Great Oak with 18 points.

In the boys distances, Loyola's Arjun Vadgama (4:12.76) held on for the wire-to-wire victory. 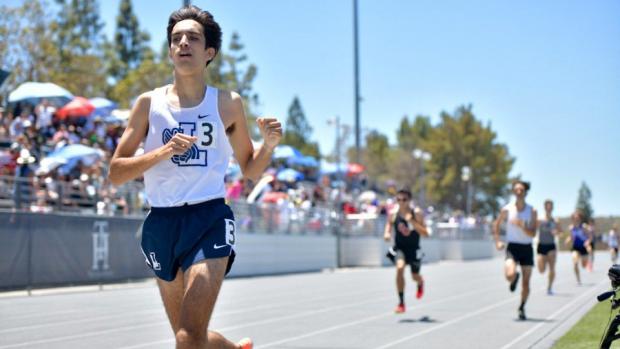 Despite the sub-60 second final lap kicks from Great Oak's Austin Montez (4:14.48) and Temecula Valley's Alejandro Kalmar (4:14.53), the two could not overcome the seven-second gap they spotted Vadgama in his victory. In similar fashion, the field allowed Beckman's Zeid Hussain a considerable lead as well. Going into the last lap, the senior was granted a 14-second lead and held with the 9:16.86 title!

Mark Gardner is a teacher, former coach, in-demand announcer, and a regular contributor to MileSplitCA, serving as the Southern Section editor.