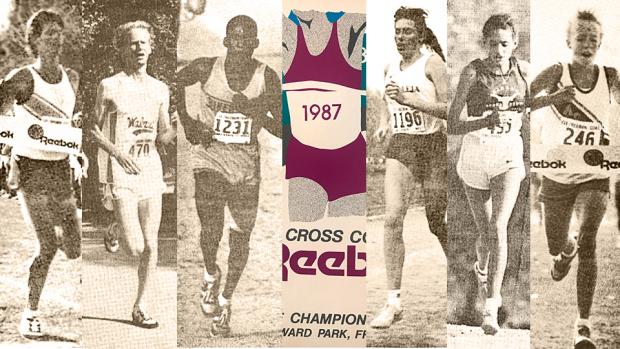 The first California State Cross Country Championship meet in 1987 featured only thee divisions. Many of the eventual small school powers that now reside in Divisions IV and V all competed in the smallest possible division, Division III.

The winner of the individual Division III race was Castilleja senior Katy McCandless. In her previous race, McCandless easily crushed the small field at the Central Coast Section championship race with a time of 17:12 on the Crystal Springs course. Despite the lack of competition for McCandless, that winning effort to this day would hold up as a time that would win the majority of CCS races.

At the State Meet, McCandless led early through the mile at 5:22. She passed the two-mile mark around the mid-11:20s and finished with a 17:51 final time. Her margin of victory over runner-up finisher Tanya Thayer of Serrano (18:17) was the largest of the day.

McCandless followed her historic victory at Woodward Park by running at Princeton. She continued to run post collegiately and eventually represented Ireland in the 5000m at the 1996 Olympics.

We reached out to McCandless and she was gracious to answer our questions below.

Following their second-place finish, the University girls led by their legendary coach Jim Tracy would go on to win a state-record 10 team titles.

1) How did you get your start in running? What was your running experience before HS?
Miss Ribera was the PE teacher at St Joseph's elementary school and told my mother that I was a runner and I should pursue the sport. The school had a great dirt track, part of PE class was to run a few laps to get ready for the St. Francis Invitational.

2) What do you remember about your first three years in hs in both cross country and track and field? Highlights?
I joined Woodside Striders the Summer before I started junior high school at Castilleja in 7th grade. I remember wonderful runs with the group in Huddart Park. The Crystal Springs XC course was my favorite. Winning the Kinney West Coast race at Woodward Park, Fresno in my junior year was a turning point. I won in a close finish over Rebecca Chamberlain (Leigh) and Laurie Chapman (Gunderson), both seniors.

3) Who were the competitors that you remember from those three years who helped push you and challenged you to be a better runner?
Laurie Chapman and Rebecca Chamberlain were older, were consistently in good shape, and held many of the local course records.

4) Who was your HS coach and what did you learn from him/her that helped you develop as a runner?
I ran for the Woodside Striders, also doing a lot of club races in addition to the high school schedule.

5) The first year of the CA state meet took place in 1987, your senior year. Was there a big deal made about the meet? Do you remember setting any goals in regard to that meet?
I remember every year and every race was important and exciting, I am sure in that specific race, i just got on the starting line wanting to win.

6) You ended up winning the Division III race. What do you remember about that race? How familiar were you with the Woodward Park course?

7) What led you to choose Princeton and was running a part of that choice?
Princeton is a beautiful campus, perfect to be out of a city for my love of running. It was also the top ranked undergraduate university.

8) What were some of your running highlights in college as well as proudest achievements?
The 5000m race at Penn Relays my senior was a big personal best and made me think I could be good enough to compete internationally.

9) What was your running experience after college and when did competing at the Olympics become a possibility?
I moved straight to London after I graduated. Craig Masback was very helpful and gave me the name of Alison Wyeth, a top British runner, whom he had met at the Barcelona 1992 Olympics. I joined her club, Parkside. I started training very hard running high mileage. Kim McDonald was a top agent who got me very competitive races and being at this international level just made me better.

10) You represented Ireland at the 1996 Olympics in the 5000m. What was that experience like and what were some of your memorable moments from that experience?
The Irish team was wonderful including excellent athletes like Sonia O'Sullivan who also raced the 5000m. I knew a lot of the athletes because I was living in London and from racing them on the European Circuit. Unfortunately, I had a bad Achilles tendon injury, but nonetheless it was so special to be at such an amazing event.

11) From your experience as a post-collegiate runner, what would be your advice for a young talented runner just entering high school?
Enjoy it, enjoy the training, the different seasons, enjoy competing. Eat well and think of injury prevention. I love yoga now and wish I had done some cross-training with weight conditioning. It is hard to fit it all in with a busy school schedule. Running was always my favorite.

12) Anything else you would like to add.
Running is such a simple yet rewarding sport. Very good for the mind and body, especially getting out and running in the beautiful places to run here in California. Get some good training partners, but I loved to go for runs with just music, too.