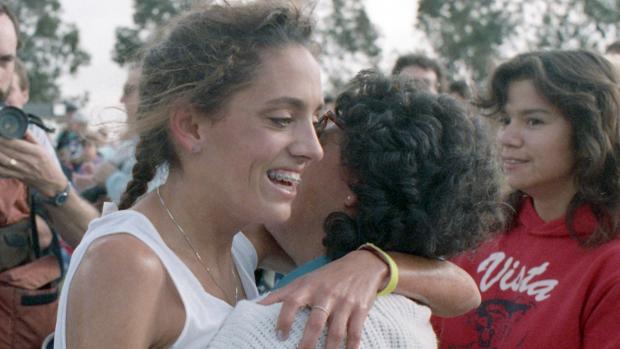 Kira Jorgensen with a big hug and big smile after winning the Kinney National Cross Country title in 1987.

Kira Jorgensen always dreamed of being an astronaut.

Although she worked for NASA for eight years, a physical condition prevented her from taking that final step into space.

But in a way she had a celestial career, going where no San Diego female athlete had ever gone before -- or since -- by winning what was then the Kinney National Cross Country Championships in 1987 and running in the race that is now the Foot Locker National Championship four straight years.

"It was an amazing experience," said Jorgensen, who is now Kira Jorgensen-Abercromby, mother of two daughters and a professor in the aerospace department at Cal Poly San Luis Obispo where she's been for 10 years.

"The thing about that race, especially then, was it was the only true national championship for any high school sport," she said when interviewed last week. "They treated you like it was a national championship, too, staying at the Hotel del Coronado for three days and bringing together the top 32 runners in the nation (now 40). 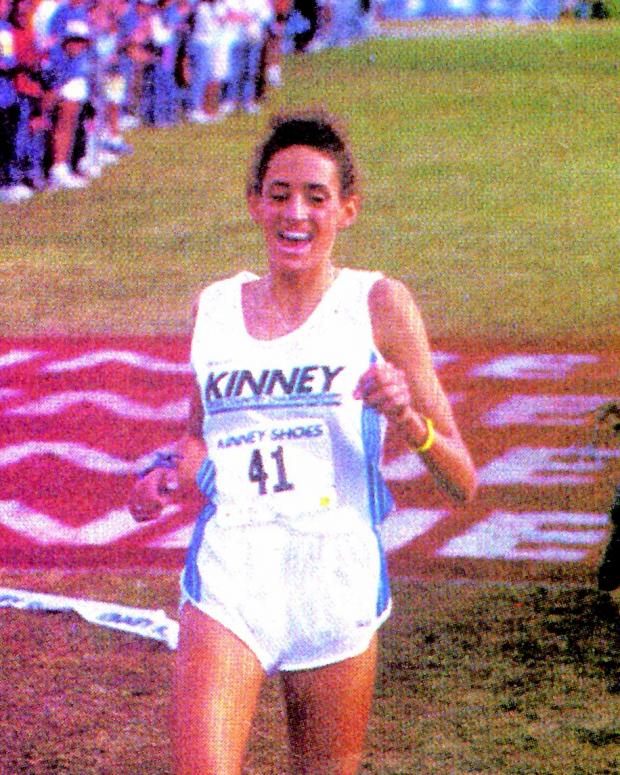 "I got to appreciate what it was like to be a member of a team. I made friends over those four years that I still have."

Jorgensen said her goal was to make the meet all four years. She did and had finishes of 14th as a freshman while attending Vista High, fourth as a sophomore after Rancho Buena Vista opened that year, winning as a junior before a huge home crowd at San Diego's Morley Field, and then 21st as a senior.

"That taught me a lot (finishing 21st)," she said. "If I knew what happened, I'd have changed things but that's the thing about this race compared to say a dual meet. Have an off-day in a dual meet and you can still win. Lose your focus at Kinney and the best runners in the country are right behind you. You can go down 20 places very quickly.

"When I was a freshman, I didn't really realize what it was. I just ran against people like Darcy Arreola (Grossmont High) and Laura Chapel (University City) and the next thing I knew I made the team. Later on I'd meet runners like Deena Drossin who went on to accomplish great things.

"Those are memories you never forget."

Nor does she forget her victory.

Coming off winning the first-ever CIF-State Championship in 1987 (she would win again in 1988), she breezed to victory in the West Regional and, considering her fourth place finish the year before, was one of the favorites.

Still, she stayed with the pack until the first big hill when she made a startling discovery. 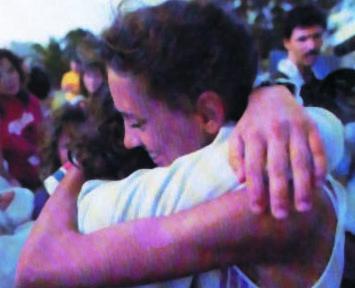 "They had an ATV leading the way (with a TV camera) and we were catching up to it," she said chuckling. "I remember thinking, 'am I supposed to pass an ATV?' After I made that move, I never looked back because my coach told me never to do that.

"I may have won by eight seconds but for all I knew, they were right behind me.

"Coming down the final straightaway, though, I could hear the people screaming. I just ran as fast I could."

Suddenly Jorgensen was the subject of every media member not to mention college coaches who might have held back but could no longer do that. She was deluged with attention so much that the enormity of the victory didn't hit her until much later.

By then she had decided to attend UCLA where she not only ran well, she was able to earn an undergraduate degree in Astrophysics before moving on to earn her doctorate in Aerospace Engineering at the University of Colorado in Boulder.

By then she was living in Houston and working with NASA but after getting married in 2005, she was offered a job at Cal Poly SLO, where she's been ever since.

Not that she's stopped running, competing in meets of her choice as a Masters half-miler.

Sometimes her fame catches up to her.

"Occasionally I'll have a student who attended RBV or from North San Diego who runs track or cross country and recognizes the name," she says. "Once that happens, it's all over the internet. I don't initiate anything but if someone asks me about it, I'm proud of what I accomplished.

"Kinney (Foot Locker) is like nothing else -- just amazing.