The Central Coast Section Semifinals took place yesterday at Gilroy HS. The meet started with field events at 10 am and concluded just a little past 6 pm. Most of the athletes got to experience the complete gamut of possible weather conditions ranging from hot to cold with swirling winds. How well you did, especially in the sprint events, was as a result of the luck of the draw as far as when you competed in your event. You can take a quick peek at the results and see the diversity of wind readings in the same events with some heats battling headwinds while some got very favorable help with the wind at their back.

Most of the state meet contenders advanced to the final but there were a few casualties like 800m state finalist Ryan Wilson of Carlmont. He will still compete in the 1600m but that is definitely one state meet opportunity that opened up for another competitor. The final will take place this coming Friday also at Gilroy HS. Field events will start at 4 pm followed by the start of all the running events at 6 pm. 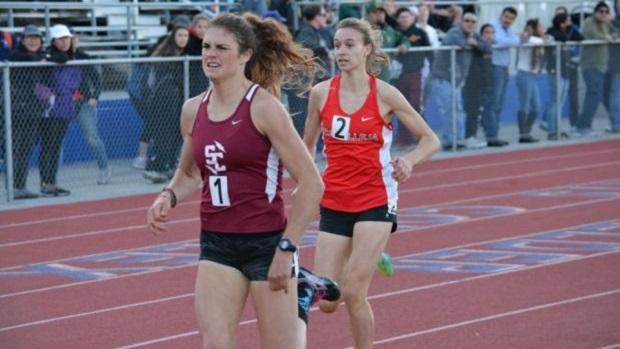 MARI FRIEDMAN QUALIFIES FOR FOUR EVENTS TO THE SECTION FINAL
In what may have been an unprecedented attempt, Santa Cruz senior Mari Friedman qualified in three distance events and then anchored her Santa Cruz 1600m relay team to victory. Friedman ran just hard enough to qualify for the finals in the distance races wearing her trainers. She put on spikes for the relay and the plan is for her to race all four races on Friday. She will be hard-pressed to win all three distance races but if there was one year where it could be done, this is the year. 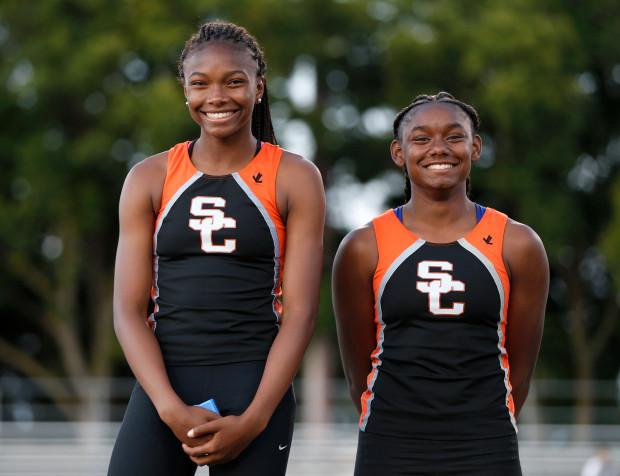 SILVER CREEK GIRLS FAVORED TO WIN TEAM BATTLE WITH SANTA CRUZ
Despite the potential heroics by Friedman, the favorite to win the girls' team title will be Silver Creek. They already have the dynamic duo of Jazlynn Shearer and Arianna Fisher (above, Nhat V. Meyer photo) but should get additional points in the 100 and 200 from freshman Aniya Augmon as well as their 400m relay. Provided they don't have any missed any opportunities to score points in their big events (100m hurdles, long and triple jumps), Silver Creek should come out on top.

SERRA VS BELLARMINE FOR BOYS' TEAM TITLE
On April 18th, Bellarmine scratched by Serra in their epic dual meet to win 69-67. At the WCAL Championship Meet, Bellarmine outdistanced Serra (3rd place) and 2nd place St. Francis with a score of 127.66. St. Francis scored 106 followed by Serra at 87.50. Now that we are at the CCS final, the quality athletes and relay teams will score the big points and the favorite at this point may, in fact, be the Serra Padres. They lost some potential big points in their 400 relay which was unable to finish at their league meet. They will, however, score points in the shot put and high jump along with the 400, 300m hurdles and the 1600m relay. Bellarmine will score their points in all three distance races as well as the 400m relay and potentially huge points in the triple jump.

TONEY POLE VAULT LEGACY
In 1986, Menlo Atherton pole vaulter Steve Toney won the California state title with a jump of 16'2". It appears the apples did not fall far from the tree as Mr. Toney has now had three sons that have followed his lead with the pole vault at a different school, St. Francis. Oldest son Shawn qualified for the 2009 state meet and had a best of 15'7". Middle son Marc qualified for two state meets and had a best of 15'9". Now the third son Scott who won the WCAL title at 15'1". He will definitely be in the mix for a shot at the CCS title as well another state meet for the fourth member of the Toney family.

DEFENDING CHAMPIONS (INDIVIDUALS ONLY)
Winning a section title is a big accomplishment but repeating as section champion is an even great achievement. These are the athletes that still have an opportunity to repeat as section champions after winning last year.

We will have a preview of this Friday's final coming up this week. Feel free to add your comments on anything of interest that I may have missed above.