It rained a little bit Friday night at Redondo Union High School and quite a bit more Saturday afternoon until the evening end of the two-day Redondo Nike Track Festival.

Not that the athletes seemed to notice. And, that seemed to be the trend around CA this past weekend. The clock doesn't lie and the performances speak for themselves.

But it did rain Saturday night a stone's throw from the Pacific Ocean in Redondo Beach and it was rather consistent for the latter third of the meet, or thereabouts. But no, only observers and those under umbrellas seemed to notice. The athletes?

No, there she was, Breanna Bernard-Joseph, in the dark and the wet nearing the end of Saturday's 12-hour marathon, settling into the blocks for her heat of the 300m hurdles.

CA's finest long hurdler and a future USC Trojan, whose early-season best of 43.62 ranks No. 5 U.S., was one of 26 who waited out the wet and growing evening chill to compete in the penultimate event of the meet. Her 44.35 winning time from a three-runner Heat 6 was far from her best yet well ahead of heat and event runner-up Amari Jenkins, a sophomore from Riverside North (46.94).

"I was thinking about how my experience with running in the rain is really going to come in handy at this time, and to not focus on the weather condition or how many other girls had dropped out the race," Bernard-Joseph wrote in a post-meet interview. "I just needed to run my race the way I know how and to run for time in order to win overall."

While Bernard-Joseph's is a snapshot of perseverance, there were so many impressive performances at the Redondo Nike Track Festival that it's difficult to know where to start. So we started at the end of Saturday night.
The end of Friday night was a showcase for DMRs, with Great Oak's girls lineup of Tori Gaitan, Ericka Burgess, Arianna Griffiths and Fatima Cortes running away in a national-leading 12:03.64 not long after the Wolfpack's 4x800 team (ordered as Cortes, Gaitan Griffiths, Burgess) also rocketed to the top of the U.S. charts in 9:20.11.
Saugus, with Mariah Castillo anchoring, was second in the DMR (12:14.81) for No. 2 U.S. and Redondo Union was second in the 4x800 in 9:32.97, No. 7 nationally.
While the front end of the girls races were more team vs. clock, the boys races were rival vs. rival.
Roosevelt's boys, with an epic anchor by Raymon Ornelas, holding off Great Oak to win in 10:33.31. Carlos Carvajal anchored the Wolfpack in 10:33.56. Those are the Nos. 6 and 7 times, respectively, in the U.S.
That was the second mano a mano between those two teams, and two individuals who battled over two laps earlier in anchoring the 4x800. Again, it was Ornelas getting Roosevelt across first (7:55.58) with Carvajal closing for Great Oak in (7:56.26). Those are the Nos. 5 and 6 times respectively in the U.S.

Great Oak, which swept the team titles, got three wins in the boys field events with Jaime Navarro with double-PRs in winning the shot put (57-11) and the discus throw (185-8, No. 4 U.S.) contested Friday night, and CJ Stevenson also posting a PR in winning the long jump (23-06.50) on Saturday. Stevenson, the defending CIF-State champion in the triple jump, did not compete in that event at Redondo.

Two notes: West Ranch's Daniel Bryant was second in both throws and PR'd in the shot (57-6). ... Clovis North sophomore Caleb Foster was second in the LJ (23-01.25) but did have an obvious foul on an impressive attempt that was measured at 24-9.

One final note on Great Oak: In a stacked boys 1600m, it was Long Beach State-bound senior Gavin Korby who emerged from a tight conservative pack -- of which Korby was boxed for much of the race -- to ride an impressive homestretch kick to win going away. Coach Doug Soles called it his "favorite performance of the weekend" following the 4:18.65 PR.

"It shows how important not leading is in winning races," Soles wrote in a text interview. "Gavin is much improved. That was a loaded field, no doubt." 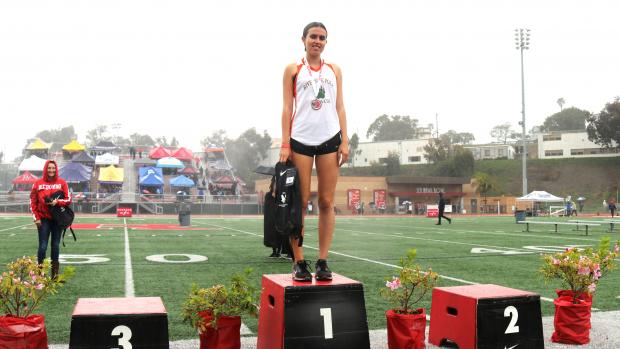 Final notes from Redondo: The Clovis North boys relay team of Christian Wood, Naythn Scruggs, Caleb Foster and Kurt Kobzeff dropped their CA-leading time to 41.54, holding off runner-up Long Beach Poly (42.48). ... Running on a wet track in a drizzle into a 0.5 meters-per-second headwind, Yucaipa's Asani Hampton blew away the competition in the 19th heat of the 100m, and the field overall, in 10.78. It wasn't the CA-leading/No. 4 U.S. 10.53 he posted the week before at Saddle Up. Blame the conditions, perhaps. We also got a glimpse of Hampton, the top returning 200m sprinter in CA, put up his first deuce of the season, albeit in a very fast split of an SMR. (If you didn't know this before, the Michigan-bound sprinter was also an all-CIF divisional football player as a defensive back who had seven kickoff/punt returns for TDs last season. Don't think he's not on Jim Harbaugh's radar.) ... The meet produced seven CA-leading marks, including a 46.91 4x100m relay by Calabasas (No. 14 U.S.), a lineup that included junior sprint star Deanna Nowling, who also won the 400m (57.36). Nowling was fourth in the 100m and seventh in the 200m at June's CIF-State final.

At the Randy Sturgeon Invitational at Granite Bay HS, Folsom Vista del Lago's Jake Grimsman cleared 7-2 in the high jump. He is No. 2 U.S. to Trabuco Hills senior Sean Lee, who earlier this season cleared 7-3. Those are the top two high jumpers back from last year's State meet, won by Lee.

And, another to keep an eye on here is Shingle Springs Ponderosa senior Jack Hartung who cleared 6-10 to win Thursday's Friendship Meet hosted by his school. That marks is tied for No. 5 nationally.

At the Clovis East Carnival:

Also from the K-Bell:

At the South County Classic at Trabuco Hills HS on Friday:

At Saturday's Ventura Invitational, Ventura junior Carlos Aviles went 58-11 in the shot to rank No. 8 U.S.