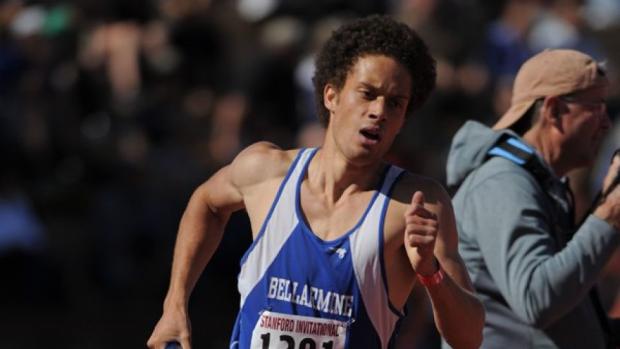 Bellarmine's Alex Scales, pictured at the 2017 Stanford Invitational, won the 1600m at K-Bell.

St. Francis High School-Mountain View's Issy Cairns announced her arrival on the Bay Area high school track and field scene at the K-Bell Invitational at Los Gatos on March 10, winning the 800 meters in 2:14.39, winning the event by over four seconds. The time was a personal-best for the freshman and would have been good enough for third place at last year's Central Coast Section championships.

"I'm pretty excited," she said. "The conditions are really good today. There's no wind or anything. So I just wanted to go pretty hard and see what I could do."

Cairns has been running since she was in sixth grade. She ran for the Woodside Wildebeests, a local track club for middle schoolers. She never got into other sports but she liked running enough that she got her older brother Euan to take up the sport. A sophomore, he finished eighth in the boys 800 (1:59.69).

Cairns went to the lead in her 800, which she said is her normal strategy.

"I usually go out pretty fast my first lap," she said. "And then I knew I just had to pick it up each 200 and keep going to the end."

She added that she thinks she can improve her second lap.

Cairns had a strong cross country season, finishing ninth in the CCS Division II race. She was the highest finisher for St. Francis, which took second in the team competition.

The CCS has a terrific history in the girls 800. Cairns could be the next great one.

The boys 1,600 was a highlight of the meet, with Bellarmine-San Jose's Alex Scales edging out St. Francis's Colton Colonna by .03. Scales, a senior, won in 4:16.88. Scales is the defending CCS champion in the 1,600 and the 800 and finished second in the latter at the CIF-State finals. Colonna, a junior, was fifth in the CCS 1,600 and sixth in the 3,200 last year. Video below is courtesy of Kristin Colonna.

Santa Catalina's Laurel Wong won the girls' pole vault at 12-6. The junior is the defending CCS champion in the event and took fifth at the CIF meet.

St. Ignatius senior long jumper Alex Enos had an outstanding winning mark with a 24'2.5" which is a huge personal best for him.