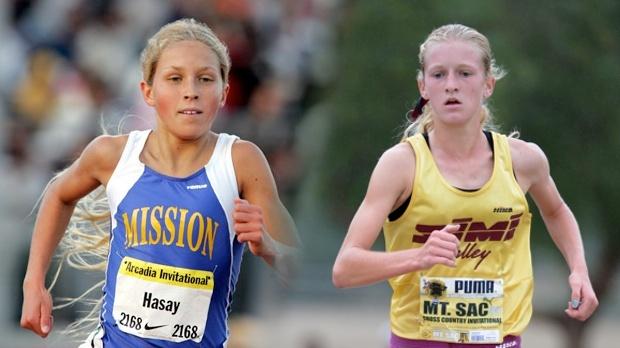 First four time Ventura County Champion in cross-country, Deena was also a 3-time CIF SS and 3-time California State Champion. She was also a four-time Kinney National qualifier, finishing 6th as a senior. She ran a best of 17:07 at Woodward Park and 17:16 at Mt. Sac and was the former freshman course record holder at Mt. Sac. Was selected for CIF SS 100th anniversary as one of the 100 best athletes in Southern Section history.

Three-time Ventura County, CIF SS and California State champion in cross-country. She had a best of 17:24 at Mt. Sac and 17:27 at Woodward Park. Amy was also a two- time Footlocker National qualifier, finishing third in 1992. Improving as a collegiate, Amy won seven individual NCAA championships as a runner at University of Arizona and earned 10 All American awards during her career.

One of 3 SS athletes who have captured 4 individual SS CC titles (Elaine Canchola and Sarah Baxter are the other two). 2 time state champion and four time Footlocker National Qualifier.

Kim was the 1995 Ventura County champion and the 1994 and 1995 CIF SS 1A Champion. She finished second in the state meet and then won the Kinney National Championship, becoming the only girl in Ventura County history to do so in 1995. Kim ran 17:14 at Mt. Sac and 17:25 at Woodward Park.

Maybe a one year wonder, but was extremely impressive. 2001 Foot Locker National Champion in 16:24, winning by 40 seconds. Doug Speck called her "probably the top harrier in Golden State history on this day." 2nd in state as a junior, D1 state champ as a senior. 16:16 at Mt. Sac. #3 All-Time Performer at Woodward Park.

Star of the University team that held Mt. Sac team record for years, considered one of the best high school teams ever assembled.  Polly also had the national mile record and the team set the national DMR record that stood for 18 years (11:44.53)