In this iconic image from the 2021 CIF-State Cross Country Championships, McClatchy junior Anna McNatt pulls away from Newbury Park senior Samantha McDonnell in the final strides to win the State Division I championship. (Patrick Corsinita photo)

There is nothing more exhilarating than crossing the finish line at the CIF-State Cross Country Championships with absolutely no one in front of you.

No celebration big enough, no happier feeling. All that mixed with the adrenalin high and exhaustion after running 3.1-miles faster than you ever have. Hearing friends, relatives and people you've never met calling out your name.

McClatchy High's Anna McNatt absorbed everything last November, soaking in the rewards of planning her season perfectly, including beating an opponent in the CIF-State Division I Championships who had tormented her all season with a perfectly timed late kick.

"The State Meet was my emphasis from the start of the season," said McNatt, who is one of only three champions from 2021 who returned this year. "Earlier, at Woodbridge and Clovis, I'd run against (Ventura's) Sadie Engelhardt, (Mira Costa's) Dalia Frias and (Newbury Park's) Sam McDonnell and I was star-struck. I was in the big leagues running against them.

"But I really thought the State Division I Championships might be easier because there weren't as many superstars. Still, Sam was there, and I'd never beaten her. I had closed the gap, though. And there were the Buchanan girls."

McNatt unleashed her withering kick which she said really wasn't that fast (her 800 best was 2:26.0) but she was a little surprised when she inched past McDonnell in the final 100 meters. Even then, had McDonnell surged back, McNatt wouldn't have been surprised. 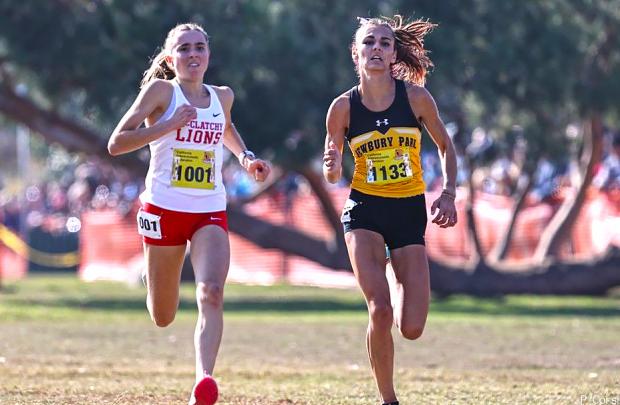 It wasn't until she crossed the finish line in 17:07.5 that she realized she was the state champion.

"I just tried to squeeze everything I had left in the final 100 yards," said McNatt, who with the victory became the first McClatchy cross country runner to capture a gold medal at the State Meet.

She happily celebrated, thanking everyone who had encouraged her. It turns out that was a good thing.

The wave continued the next week when she finished eighth in the EastBay West Regional at Mt. SAC, an excellent job of being among the top 10 to qualify for the nationals and still saving something for season-ending championship in San Diego. McNatt said she had focused on the State Meet and cruised the regionals but racing against 39 of the fastest runners in the nation at EastBay, she could muster just a 27th place in 18:18.8, which disappointed her.

But she rested a little -- now she thinks maybe not long enough -- before starting training for her junior track season where McNatt would no longer be the underdog, replacing that mantle with the word "favorite," something she'd never experienced before.

The Dublin Distance Fiesta would be her coming out party and she was entered in the 1600 and 3200.

But McNatt had been feeling increasing pain in her legs and back. After running the 1600 at Dublin (at right in photo below), she had to scratch the 3200, her favorite event.

Like most runners, she figured she'd just rest up a bit and come back stronger.

Instead, her doctor told her she had a stress fracture and since her legs had been bothering her, that kind of made sense. But this was a rare stress fracture of the sacrum in her lower back, not her foot.

"I couldn't believe it," said McNatt, "I'd never been injured before." While she still held out hopes of returning, her outdoor track season was over. In fact, she didn't get the green light to return to light running until August.

"I definitely thought about quitting during the summer," admitted the 16-year-old who has never had a grade lower than an "A". "I questioned if I wanted to go through this again and I thought 'I can't do this sport.' If I were to get injured again, was it worth it?

"It was heartbreaking. This sport builds you up and puts you down. I wanted to be able to walk around and go hiking with my family. I couldn't even do a recreational run. In track all I could do was go to the meets and cheer on my sister (Louisa).

"It's miserable to have pain all the time. What really hurt was to see how my injury affected others. I'd go to practice and see sad faces from people who had supported me for so long.

"I had a rough time until I was cleared. I went through all the stages -- denial, acceptance, recovery and moving forward. In the spring I studied for the AP exam, focusing on school since I couldn't run. I'm just now turning it around."

She has had some light training runs but no one, Anna McNatt included, knows when, or if, she'll be able to run cross country competitively and if she does, how well she will perform.

"We were hoping maybe she could run at Woodbridge because it's flat, but not like she ran last year," said Watkins, who is in her seventh year as head coach. "Anna is one of the toughest kids I've ever seen. She has no fear of pain, she's smart, she's incredibly meticulous. She has the long game and the will to prepare.

"She was OK as a freshman, running in the 5:40s, but I can't say I knew she would develop into a State champion. After winning the Sac-Joaquin Section championship easily, she was excited for the State Meet. She had a plan and stuck to it.

"This is a completely different year, and we don't have those State championship expectations. We just want her to be able to run and see what happens."

The goal of doing well at State a year ago has now been replaced by somehow making the State Meet, as either a member of the McClatchy team -- which is an annual power in the Metro League -- or, if the Lions don't nab one of the two SJS D-I berths for State, perhaps as an individual.

Currently, twin sister, Louisa, is in a better position to do that as the team's No. 1 runner. 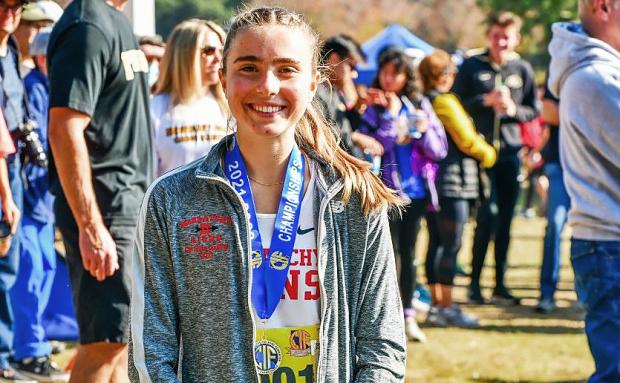 Anna McNatt is certainly in a better place now than she was in the spring when all she could do was hope each week that suddenly the pain would go away and at the worst, she could get back on the roads during the summer.

So, she's grateful for the memories of success a year ago. She is also hoping at least this spring she can show the college recruiters who have stood behind her that they were wise to do so.

"I can't ask my body to win State this year," said McNatt. "I have the same motivation and drive, but if I'm holding the team back, that's not fair. When I get my fitness back, I'll have to make a decision. We'll see.

"No matter what, there's always track and college. I love cross country and I'm still hopeful of returning to the State Meet."