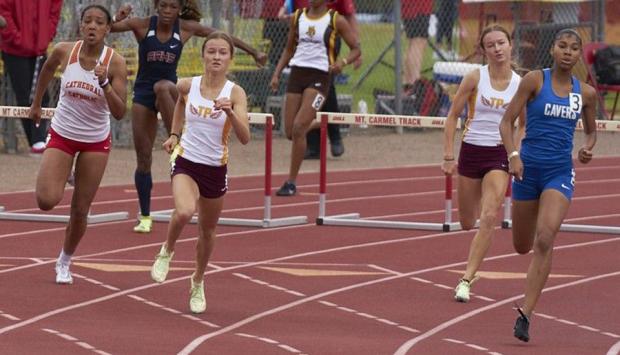 First in a series of event-group previews

Somehow neither boys hurdle race will be the same without season-long state leader Jadyn Marshall of Stockton St. Mary's.  His 13.35 in the 110-highs and 36.73 in the 300-intermediates at the Clyde Littlefield Relays in Texas back in March remain the fastest in the state but Marshall was injured at the end of the season and failed to qualify.

The girls had no such problem and year-long 100-meter hurdle front-runner Aaliyah McCormick of San Diego Scripps Ranch shows no sign of slowing down as she breezed to a 13.81 qualifying time to go with her wind-aided 13.46 and 13.61 legal. No one has gotten close.

San Diego Cathedral Catholic's Kapiolani Coleman, the state leader off her 42.19 at Arcadia, was upset in the section championships by Torrey Pines' (by way of Poland) Karina Janik, who ran 42.38. Kai Graves-Blanks (Upland/SS), Jr. - In an event where wind is a major factor, consider that Graves-Blanks clocked his 13.75 with a perfect 2.0 meter-per-second breeze in the Southern Section Masters championships. He has run a wind-aided 13.64 as well. (Pictured)

Logan Lyght (Mater Dei/SS), Jr. - Has a wind-aided PR of 13.94 at the Southern Section Division 2 Finals and a wind-legal 14.04 in the SS Masters meet. He's looking for a rematch with Graves-Blanks in the State championship.

Davis Davis-Lyric (Upland/SS), Jr. - Part of that great Highlanders hurdle group, he clocked a 14.14 in those perfect wind conditions in the Southern Section Masters championships.

Seth Johnson (Cajon/SS), Sr. - First 12th grader, so you can bet this event will be a ridiculous event next year. Not bad in 2022, either, with the fourth Southern Section hurdler having run 14.16 in the Masters meet after clocking a PR 13.94 with wind.

DeQuan January (Upland/SS), Sr. - Third Upland hurdle ace comes in with a best of 14.09 (2.8 mps wind). Qualified as the sixth-place finisher in the Masters meet. Delaney Crawford (Upland/SS), Sr. - Not all of the Highlanders hurdlers made it through in the short race but Crawford made up for the mishap by winning the Masters long race in 37.23. Don't forget he scorched a 36.64 a year ago and was under 37 twice. (Pictured)

Ben Kin Ho Tsang (San Jose Independence/CC), Jr. - The 11th-grader chopped 1.3 seconds off his PR when he won the Central Coast Section in 37.32. Few would doubt he could pull a mild upset as he has been under 40 seconds three times.

Shawn Toney (Los Altos/CC), Sr. - Toney gave Tsang all he could handle in the Central Coast finals, clocking a 37.61 to finish second.

Kai Graves-Blanks (Upland/SS), Jr. - He certainly has the speed and is used to winning after leading a 1-2 Upland finish in 37.74.

Isaac Lewis (Long Beach Wilson/SS), Jr. - He's looking to get below that 37.82 he ran way back in February in the Trackrabbit Invitational. Clocked a 37.96 in the Masters meet. Aaliyah McCormick (Scripps Ranch/SD), Sr. - Headed to Oregon, McCormick has lost just once all year at Arcadia and is unbeaten against Golden State runners. She has been under her section record of a year ago four times with a legal 13.61 and wind-aided 13.46.

Charlize James (San Diego/SD), Sr. - Any other year, in any other section, she would be a dominant force. But in San Diego she races McCormick almost every week but that has helped her to a school-record 13.92 at Mt. SAC.

Giselle Kirchner, (Rocklin/SJ), So. - Clocked a fine 14.03 to win the Sac-Joaquin Masters championship. Steadily dropping time after opening at 15.87.

Kailah McKenzie (Orange Vista/SS), Jr. - Actually, she is unbeaten in this race in seven starts. Her best of 14.03 in aided by a 2.2 meter-per-second breeze. (Pictured)

Kapiolani Coleman (Cathedral Catholic/SD), Jr. - Stopped the timing devise at 14.05, a personal best, in the section finals to place third. Looking for that sub-14 here.

Y'Vette Harris (Stockton Lincoln/SJ), Jr. - Look at those times behind James. Harris has a best of 14.06 in the TCAL finals and is also eyeing that 14-second barrier. Kapiolani Coleman (Cathedral Catholic/SD), Jr. - Finished second in the Arcadia Invitational where her 42.19 remains the fastest in California. Extremely steady and now that she isn't long jumping, look for that first sub-42. (Pictured at top)

Karina Janik (Torrey Pines/SD), Jr. - She and her twin sister Dominika moved to San Diego from Poland in the eighth grade and she has made a big impact, including winning the section in a PR 42.38. She has six races under 44. (Pictured at top)

Y'Vette Harris (Stockton Lincoln/SJ), Jr. - She's only lost twice all year and comes in after winning the Sac-Joaquin Section title in 42.61.

Charlize James (San Diego/SD), Sr. - A very dangerous senior with serious speed and a PR of 42.71. She placed second in the section championships to Janik. (Pictured at top)

Madeleine Conte (Monrovia/SS), Sr. - Southern Section D-3 and Masters champ has a best of 43.33 and has been on a mission since mid-April. (Pictured above)