MILESPLITCA TASTY RACE OF THE WEEK

We roll into the first day of March on the back of the first two weekends of the outdoor season and an avalanche of mind-blowing performances. In February, no less! Yes, February!

This week's MileSplitCA Tasty Race offering comes courtesy of coaches Chase Frazier and Kennie Arriola, and the good folks at JSerra (SS) Catholic HS. And, specifically, thanks to Ingrid Arriola for the stellar camerawork on the video.

What we see in this race is an outstanding field of girls from Southern Section throwing down over 800 meters.

With the likes of Anaheim Canyon senior Emma Hadley, Fountain Valley senior Kaho Cichon, JSerra junior Anastasia Snodgrass, and Jeanneret in hot pursuit, Gallegos pushes the pace until the end when Hadley comes charging into the picture creating a rather dramatic finish.

The JSerra coaches said they knew a PR like this "was coming" for Gallegos and that her confidence has continued to grow throughout the walk-up to the outdoor season.

At the CA Winter Championships toward the end of January, Gallegos was a close second in the 1500 meter final, running 4:35 with a 68-second last lap. Later in the meet, she kick-started JSerra's 4x800 team toward a meet-record-shattering performance, running 2:14 on her opening leg.

"It wasn't much of a surprise based on her workouts; she's beaming with confidence," Kennie Arriola, JSerra's boys distance coach, wrote in an email exchange.

Adding a significant dollop of icing to that cake, Gallegos has committed to USC with the school's signing day next week.

"A little bounce in her step can also be attributed to the fact that she had just committed to USC a day or two prior to this race," Arriola wrote, "so she's excited to wear a Trojan jersey next year." 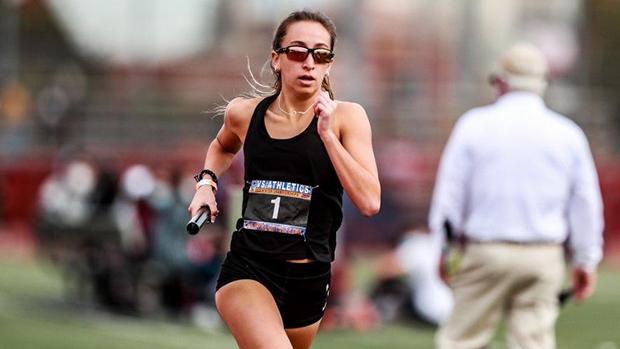 "Last track season was very tough running XC in (January-March), then jumping right into track season wasn't the best for our training and timings," Frazier wrote. "Now that we are back to a normal year, things have been so great!

"Ashlee received a lot of her confidence from the winter championships meet ... and since that meet she has continued to improve."

Gallegos ran No. 6 on the deep JSerra cross country team that won the CIF-Southern Section and CIF-State Division IV titles. She's rolled that base right into some early fast two-lap performances.

"Ashlee owes a lot of her success to her teammates that are out there every day working hard alongside her," Frazier wrote. "Ashlee's commitment to the process has been exceptional and as our team captain, she has been responsible for making all the girls around her better.

"With a very talented roster, every day at practice is race day. And I am so lucky to have a leader and a captain like Ashlee.  She has continued to put in the hard work over the last few years believing that her hard work would pay off."

Clearly, it has. Fight on!