This article was updated Jan. 6 to update the status of the Arcadia qualifier meet previously scheduled for Jan. 8

With the CIF spring track and field season officially beginning for the majority of the state's 10 sections toward the end of the third week of February, a series of winter track meets locally and nationally serves as the perfect segue between cross country and the launch of the outdoor season.

In fact, the annual CA Winter Championships Qualifier series got an early start in late December with a couple of meets at Los Alamitos and Roosevelt, and a third, at South Pasadena, which was unfortunately scrapped because of poor weather.

COVID-related complications notwithstanding, there are 15 qualifier meets currently on the schedule for January, including four this weekend, leading to the CA Winter Championships on Jan. 29 at Arcadia HS.

Also this weekend, the annual LEAP Squad-sponsored LeapFest jumps-only showcase is scheduled for Saturday at Mater Dei HS in Santa Ana. That event traditionally draws top horizontal and vertical jumpers and this year is no exception.

Entries for the Keinan Briggs-produced event include the top two CA boys returners in the long jump in Elijha Ellis of Golden Valley (23-11.5) and Camryn O'Bannon of St. John Bosco (23-10). O'Bannon also is the No. 3 returner in the triple jump (46-9). Because of the recent surge of COVID-19, athletes are "strongly recommended" to take a COVID-19 test before the event and all attendees to the event will be required to wear a mask except for athletes only while they are competing.

Later this month, the Sundown Track Series resumes on January 22 with a distance-only meet scheduled for Eastmark HS in Mesa, AZ. The event, produced by Newbury Park coach Sean Brosnan, served as a bridge last winter to the COVID-delayed spring season in CA. There were three meets last winter, but only one is scheduled so far this spring. And that one will add an 800-meter race to the schedule that includes heats at both mile and 3200-meter distances, Brosnan said.

The Sundown meet is an open event with an emphasis on athletes looking to run fast. To borrow a quote from the event website: "Our meets will be held at night under the lights. With the right atmosphere and positive attitude, times will be fast."

The CA Winter Champs series offers indoor track distances outdoors. But athletes truly looking to compete indoors have a handful of options over the next couple of months, albeit outside of CA.

Back in the Golden State, the Winter Champs series of qualifiers schedule is as follows (meets are scheduled for 9 a.m. unless noted. Site contact is included.)

(UPDATE: The qualifier meet scheduled for Arcadia has been canceled.) 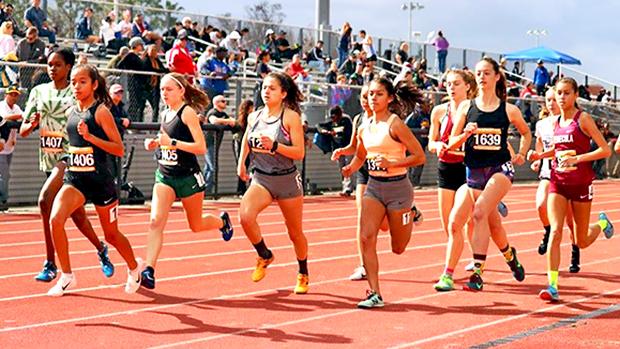 - Athletes register ($12) at the site of the qualifier meets.

- Athletes who hit a qualifying standard at a qualifier meet (noted below) and wish to compete in the championship meet on the 29th, MUST register and pay a separate $25 fee, and then will receive their championship meet "Golden bib" AT THE QUALIFIER MEET. The Golden Bib serves as entry at the Championship meet.

- There is no on-site registration at the Jan. 29 Championship meet.

(Complete information is available on the MileSplit calendar entry for each meet in the CA Winter Champs series.)

ORDER OF EVENTS AT EACH QUALIFIER (rolling schedule)

*Weight Throw (At Championship Finals only)

**Pentathlon (At Championship Finals only)

Athletes must achieve the minimum qualifying standard (see below) at one of the Qualifier Meets. Winning an event does not automatically qualify you for the CA Winter Championship meet. You must also meet the minimum standard. Relay members must attend the same school. NO ALL-STAR TEAMS!

- Pentathlon - **By email only to richgonzaleztrack@gmail.com by 1/20 for entry consideration.

Athletes compete unattached, however, all relays MUST be comprised of athletes attending the same high school. No All-Star Teams!

(Complete information is available on the MileSplit calendar entry for each meet in the CA Winter Champs series.)