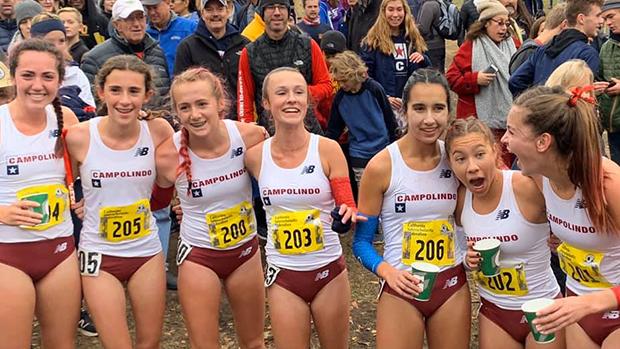 The North Coast Section is one of the largest and most competitive sections in the state. Over the past three school years, NCS athletes have dealt with the midway cancellation of the 2018 section XC final, an abbreviated cross country season last spring as well as no official section final in Track and Field in 2020. This coming school year offers hope to all those individuals and teams as a full schedule of races is on the horizon and the best harriers will be able to demonstrate their fitness on the Hayward HS course in November like the 2019 Campolindo girls above (Campolindo XC site photo) Amador Valley is the 2-time defending champion in Division I. They will be led by individual favorite Ella McCarthy. There are only 8 teams in this division but 6 of those schools have over 3000 students. Now that Amador Valley will be competing in Division II, the favorite should be their league mates. Dougherty Valley is one of those schools with over 3000 students and finished either first and second in the four section races before the 2020 season.

Division II and III have been dominated by two teams over the last few seasons. The Granada girls won five straight section titles before Covid ended their opportunity for a sixth straight title in 2020. The Campolindo girls have been even more dominant and have won nine out of the last ten section titles contested. Both teams will be favorited again in 2021 and based on history, do not count them out in big races in November.

If there was one athlete that rose to prominence last spring, that runner is Albany senior Sophia Nordenholz (file photo above). She swept the 1600 and 3200 in all three Dublin Distance Fiestas. She also broke the section record in the 3200 at the famed Arcadia Invitational. She will be the heavy favorite to win the individual title. Piedmont has been one of the most consistent teams in this division but we will find out if they are ready to win another section title or if there is another team ready to claim the top spot in this division this coming season.

The Lick-Wilmerding and University girls have clashed over the past several years attempting to one up each other trying to claim BCL, NCS, and state titles. Over the past three seasons, the L-W girls won three straight section titles as well as the last two state titles. University has more than kept them honest and will be looking to reverse those results this season. University junior Maya Mason is the top returner from the 2019 meet and could contend for her first individual title here.