Kenan Christian, who in a year went from barely making the podium at the CIF State Meet to the top step in two events, has been selected as the Gatorade California Boys Track & Field Player of the Year.

Christian, a 2019 graduate of San Diego Madison High who is already enrolled at USC on a football scholarship, swept the 100- and 200-meter sprints at the State Meet held at Buchanan High in Clovis on Memorial Day weekend.

Christon's winning time in the 100m of 10.30 with a 1.2 meters per second legal wind, equalled the meet record time set in 1992 by another San Diego Section sprinter, Riley Washington of Chula Vista Southwest.

As a junior, Christon placed sixth in both the sprint races.

Text of write-up on Christon from the State Meet

Madison senior Kenan Christon came in as the man to beat in the short sprints. The USC football recruit who runs track "for fun" had a blast on Saturday. 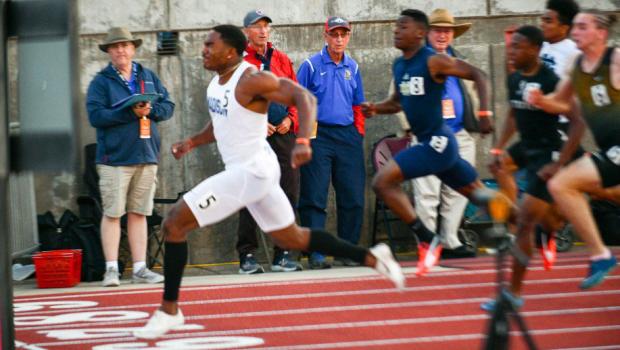 Christon, sixth in both sprints as a junior, had previously posted a 10.26 wind-aided best in the 100 meters.
On Saturday, he powered through a wind-legal 10.30 to equal the meet record set by another San Diegan, Southwest High's Riley Washington in 1992.
Christon came back later in the meet after the weather had turned and a chill enveloped the stadium looking to complete the sprint double. Getting out fast and remaining low looking every bit like the football running back he is, Christon leaned into the turn and by the straight, he was gone. His 20.69 was aided by a 2.5 meters-per-second wind, was .30 faster than runner-up Cameron Reynolds (Clayton Valley/NC) and .42 ahead of Christian Grubb (Sherman Oaks Notre Dame/SS).
Grubb had beaten Christon in both sprints twice earlier this season but the third time was all Christon.
Christon is the first to double in the short sprints since Curtis Godin (Santa Ana Mater Dei/SS) went 10.31 in the 100m and 20.87 to win the 200m in 2014.