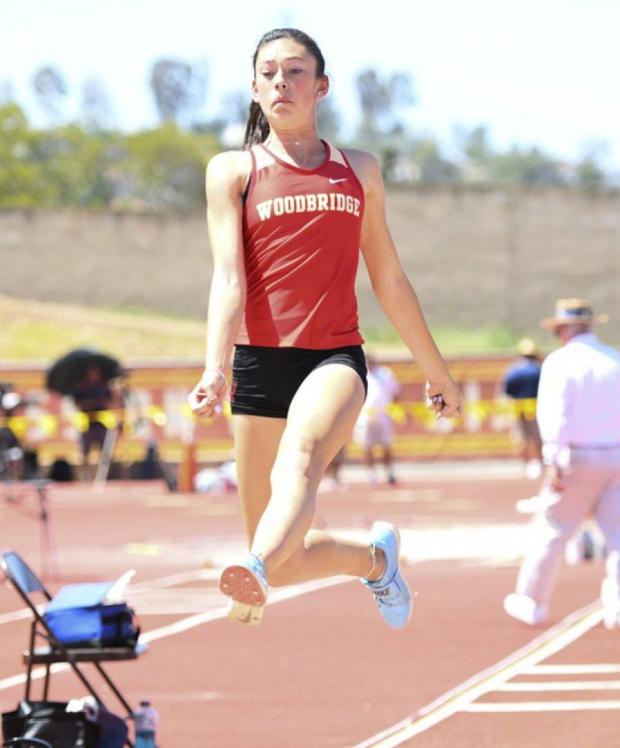 Breaking down the results:

As noted above in the photo caption, Woodbridge (SS) sophomore jumper/hurdler Madison Lyon was the the top vote-getter in the state. Lyon received 13,152 votes, 47.2 percent of the 27,865 votes in the Sophomore Girls Poll. Rachel Glenn, the State Meet co-champion in the high jump from Long Beach Wilson, received 11,626 votes, 41.72 percent of the Sophomore Girls Poll total. How's that for awesome competition!! Way to go, voters!!

Lyon, Glenn and Hemphill were the only athletes to receive at least 10,000 votes. Generally, the voting was fast and furious for the lower grades and tailed off significantly for the higher grades.

Freshman Boys Poll winner James Wright, a thrower from Great Oak (SS) received the third most votes overall, 9,765, which was 52.8 percent of the 18,494 votes cast in that poll.

Freshman Girls Poll winner Paige Sommers from Westlake (SS), the nation's #1 pole vaulter in the Class of 2021, received the third most votes among girls across all four polls, 7,897, which was 43.53 percent of the 18,141 votes cast in the Freshman Girls Poll.

Other top vote-getters by poll

Jada Hicks, the State Meet champion in the 100 hurdles from Upland (SS), was a narrow winner over State Meet 300 hurdles champion Breanna Bernard-Joseph of Roosevelt (SS). Hicks received 38.88 percent of the vote. Bernard-Joseph got 34.93 percent. Because of limited voting in in senior polls, the difference here was 24 votes.