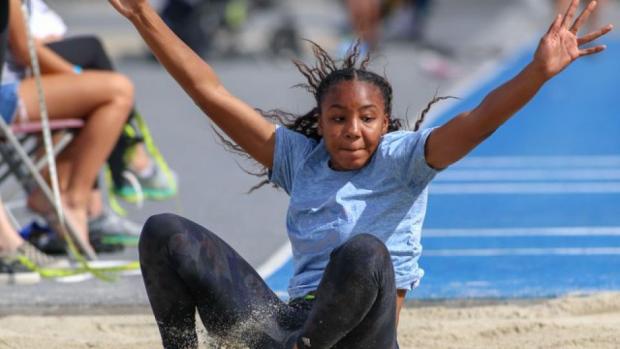 Carson's Jonon Young has is the defending champion in both horizontal jumps. (Scott Padgett photo)

The LA City Section is guaranteed three automatic qualifying spots per event per gender into the CIF-State Championships June 1-2 at Clovis Buchanan HS. Additional athletes may advance by hitting a statewide at-large standard. (Those standards are listed at the bottom of this article.)

There weren't a lot of elite standard performances at the section prelims last week at Birmingham HS, only 16, in fact. But it was a qualifying meet, so we're not reading too much into that.

The Los Angeles City Section is allotted three automatic qualifiers per event per gender for the CIF-State Championships June 1-2 at Clovis Buchanan HS. Sections may enter additional competitors provided they have met or bettered the "At-Large" standard for their event in their Section Meet that qualifies athletes for the State Championships. In the running events, all times must be recorded on "Fully Automatic Timing" systems (FAT). No hand times will be accepted.