A division-by-division look at the girls competition at the CIF-Southern Section all-divisional championships on Saturday at El Camino College. 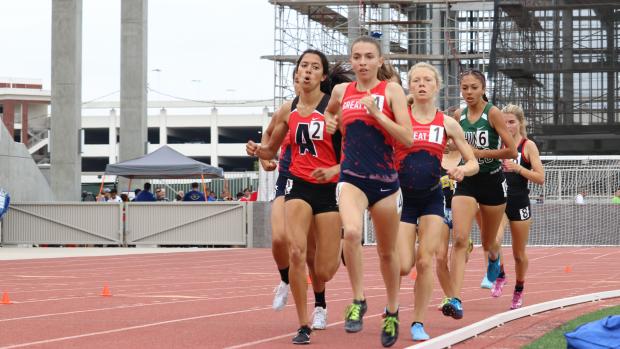 The team favorites going in, Great Oak scored 36 points over the final three events to take home its 2nd title in the past three years.

The quartet of Tori Gaitan, Fatima Cortes, Sandra Pflughoft and Arianna Griffiths provided the punch that the Wolfpack was expecting.   Gaitan won the 3200 meters, while Cortes took 2nd in the 1600 and 4th in the 3200.  Griffiths was 3rd and 5th for the two events while the lone senior, Pflughoft took 3rd in the 3200 meters. 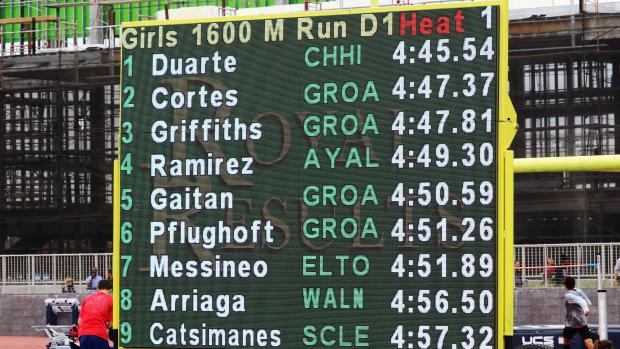 Unprecedented, this is the first time in California state history that four girls from the same team have run under 4:52 in the same race.  These four are projected to make the State Meet in both events.  For the 3200 meters, it has only been achieved once by the 2010 Saugus girls.  But, it has never been done for both the 1600 and 3200.  (Keep in mind that they also graduated four girls from last year's final of the 1600). 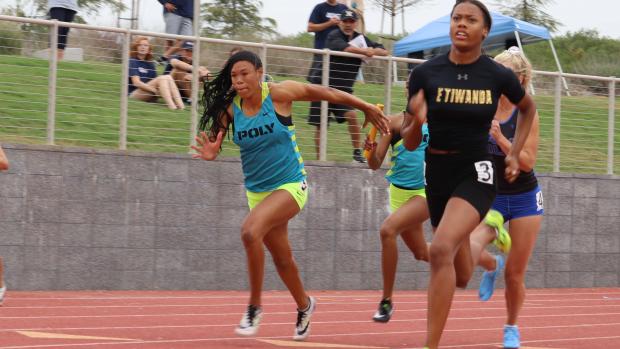 Representing Long Beach Poly as the runners-up, defending state champion, Ariyonna Augustine ran away with impressive victories in the 100 and 200 meters as expected.  It was her third consecutive 100m title and second in three years in the 200m. She anchored her girls home to the victory in the 4x100 relay while also helping push her squad to a 4th place finish in the 4x400 relay.  While both relays advanced to the Masters Meet, Augustine's strength was on full display as her 11.75 victory in the 100m was into a negative head wind.  In the 200, she came off the curve in the lead and continued to move away for the victory in 23.91.  She will match up with the best next weekend as she now owns the #2 time in the 200 meters under wind legal conditions.

Jaelyn Predium was 5th in that 100 to earn an additional four points.  Kenya Payne placed 4th in the 300 hurdles while also advancing onto next weekend.  Over the past 19 seasons, Long Beach Poly has been in the top two in 18 of those years while capturing 13 divisional titles!  The Jackrabbits (aka 'Trackrabbits') will look to defend their State Meet title crown in two weeks.

Jumping into the top three squads, the Huskies of Chino Hills provided us with the biggest surprise of the day.  Freshman Jacqueline Duarte, unleashed the greatest improvement of anybody with her 4:45.54 upset victory in the 1600 meters.  This was over a 13 second improvement and only her third effort of going under 5:10 in the event.  This moved her up from outside the top 30 in California to #4!

Zani Meaders placed 2nd in the 400 and is on track to qualify once again as a State Meet finalist in the event.  Also providing an upset, Duarte and Meaders provided their squad with a sizable lead in the 4x400 relay and the Huskies held on for a narrow victory at the line.  Their 3:47.47 was a 10-second seasonal best while also taking them from outside the top 30 in California up to #3.  Meaders also qualified for the Masters Meet in the 200 meters (24.58).

In what ended up being the fastest 1600 meters in the history of the divisional finals, with four girls breaking the 4:50 threshold, along with another three going under 4:52, Ayala's Mikaela Ramirez took 4th with in 4:49.30.  She also impressed with a late race surge to capture 2nd in the 3200 with a time of 10:28.43. Both efforts easily qualified her for next weekend.

El Toro's Ashley Messineo qualified for a 2nd straight Masters Meet, this time with a four-second personal best of 4:51.89.

El Toro's Maliyah Medley as able to hold on to defend her title in the 400 meters. Not too surprised, she came back to take 2nd in the 200 (24.28), but sandwiched in between, she placed 6th in the 100 meters as well.   As she will focus on main two sprints moving forward, her 54.51 was the top time of the day in the 400.  She created the pace over that first 300 meters for five of the nine girls to advance.

Jada Hicks received a strong mid-race challenge from Temecula Valley's Danae Dyer but also able to defend her title in the 100 hurdles with a 13.94 (Dyer was 2nd in 14.02).  With swirling winds effecting a variety of sprints, this was run into a -0.9 wind.  With Hicks defending her title, Dyer and Roosevelt's Breanna Bernard-Joseph (14.10) switched places for the next two spots, compared to a year ago.  Hicks is seeking a 4th trip back to the State Meet while Dyer and Bernard-Joseph are seeking their third.  Hicks also impressed in taking 3rd in the 200 meters (24.53).  Unfortunately, injuries to Jordyn Grady and Chelsea Daye depleted Upland's 4x100 relay squad, which did not advance. When fully healthy, that team ran the fastest time in California this season.

With a flurry over the last two hurdles, Segerstrom's Nyree Brown came from behind to capture the title in the 300 hurdles.  Competing in Division 2 last year, her 41.86 is an Orange County record and the new top time in California (US #8).  On her inside, Carter's Mya Greene also came up with a personal best 42.32, which elevates her #4 in the state.  Roosevelt's Bernard-Joseph was 3rd and is seeking a third trip back to the State finals and place herself upon the podium for a third consecutive time. Meanwhile, BBJ also pulled off one of the best comebacks of the meet but just came up short in anchoring her girls 4x400 relay squad to 2nd place in 3:47.50 (#4 in CA). That one race provided five of the top seven times for the 4x400 relay on the day.

Mistakenly off most radars, Diamond Bar sophomore Marissa Vasquez surged off the curve and never relented in her 2:11.98 victory in the 800 meters (CA #10).  Centennial's Rylee Penn (2:12.53) returns to her fourth straight Masters Meet while Riverside Poly's Kalea Ibarra is back to the form we witnessed three years ago with a personal best of 2:12.68.  State finalist a year ago, Los Alamitos' Delaney Sanacore easily advanced with her 2:12.92, 4th place effort.  Freshman Makayla Browne from JW North also moved on with a 2:14.02 performance.

The D1 girls dominated the pole vault competition.  With seven girls advancing onto next weekend, Redondo Union's Amari Turner returned the favor on league rival, Brigette Grau of Mira Costa.  With Grau taking home the Bay League title, Turner, who was 4th last year, earned the CIF crown with a 12-10 personal best.  Along with Grau in 2ndplace, three others cleared 12 feet.  Five of the top eight in the section that cleared that height came from this competition.

State leader, Rachel Glenn of Long Beach Wilson, captured the high jump title as it did come down to misses as her and Woodbridge's Emily Garner both cleared a height of 5-07.  Garner was the D2 champ in 2017. Glenn also unseated another former winner in two-time D1 champ Abigail Burke, who cleared 5-5 and advanced to Masters. Burke is the defending Masters and State champ.

Garner was not to be denied in the triple jump.  She outdistanced her teammate, Madison Lyon, 39-01.5 to 38-05.5, with both easily advancing forward.

After leading her 4x100 Relay team a 2nd place finish, in a bit of a surprise, Arcadia's Stephanie Yen captured the title in the long jump in 18-04.50. Runner-up in 2017, Los Alamitos Faimalie Sale had no problem capturing the shot put, winning by more than five feet with a mark of 43-08.25.  This was the 3rd best mark of the day.  Trabuco Hills' Kyliegh Wilkerson won the discus title with an effort of 137-05 which was the 4th best effort on the day.