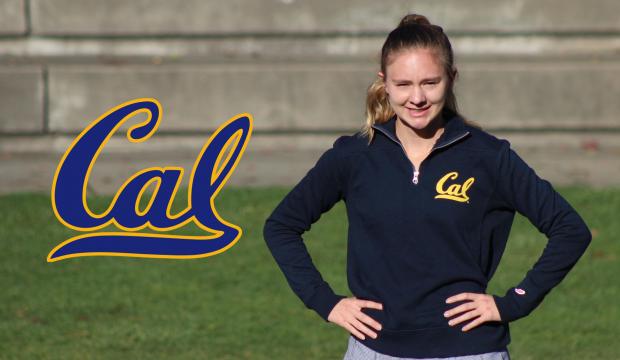 SACRAMENTO, CALIF. - Senior cross country standout Sydney Vandegrift will run for the UC-Berkeley cross country and track and field program next year after committing to the Bears last week. She will officially sign with the school during the St. Francis Signing Day Celebration on Wednesday.

"I am really excited to run collegiately," said Vandegrift. "I did not see this happening coming in as a freshman. I am really happy with my choice of Cal. It is a great fit for me."

Vandegrift, who also considered William and Mary and University of San Francisco, will join a program that recently posted their best finish in the Pacific 12 Conference Championships since 2012 and produced the league's freshman of the year. She will run for Head Coach Shayla Houlihan.

"Athletically, there is a great competition and they are focused," said Vandegrift. "They want to be there and work hard. It is a great atmosphere and they have great facilities and both will help me get better."

Vandegrift originally was focused on playing soccer, scoring four goals and 11 points on the Junior Varsity team as a freshman. But she decided to try out cross country in the fall before her spring sport began and the switch was turned for her.

"When I came to St. Francis, I came here for soccer," said Vandegrift. "I decided to do cross country on the side. I loved the team and their drive. It was something I wanted to be part of and I realized I really liked running."

The rest is history and Vandegrift has been leaving her competitors in her dust ever since. She earned All-Delta League status for the third consecutive season, finishing second overall at the league meet. She has been the top finisher for the team in every meet while winning the Oakmont Invitational and recording seven top-five finishes.

"Since I am a senior, I am looking to help us do well as a team," said Vandegrift. "I remember when we placed third for DI as a freshman. It is a big reason why I wanted to be as dedicated as those girls. Individually my goal is to set a good example for the underclassman and give them the same atmosphere that I had my freshmen year."

Vandegrift was also named a captain of the team for 2017, sharing honors with Erica Cradeur and Alana Reyna.

"It meant a lot to me to be a captain," said Vandegrift. "It means a lot to me to lead these girls and show them the traditions I was introduced to and how to be a dedicated runner."

Vandegrift, who has run at three straight CIF Cross Country Championships, qualified for the CIF State Track and Field Championships in the 3200 as a sophomore, finishing seventh overall.

"Obviously the No. 1 thing that sticks out is her work ethic," said Head Cross Country Coach Aaron Rios. Over the last three years, she has been the hardest worker here at St. Francis. She deserves to go to Cal because of her work ethic and I am sure it is same in the classroom."

She placed fourth at Sections and seventh at Masters and hopes to conclude her career with another state appearance on the track in June.

She will join classmate Sydney Ranker (Crew), who will also be signing with the Bears on Wednesday. Vandegrift will also join a roster at Berkeley with former Troubadour Ariana Arndt.