Looking Back at Weekend 8: 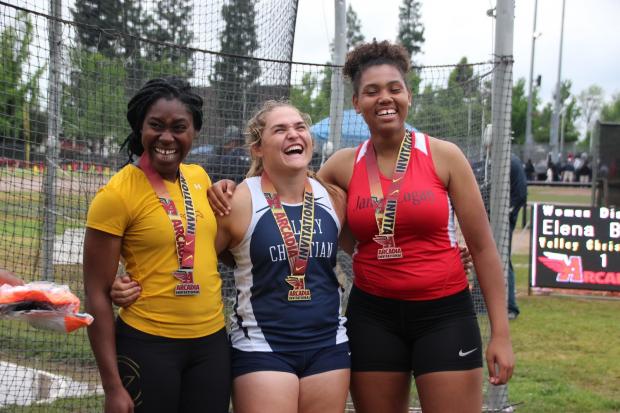 The girls dominated the competition in terms of quality marks at the 29th Annual Serra Top 7 Invitational. Leading the way in the field was Lincoln (SF) thrower, Pamela Amaechi (above left from Arcadia Invitational thanks to Valley Christian SJ coach Josh Small). She won the shot put and discus with marks of 46'10" and 155'5". In the Pole Vault, two of the best vaulters in CCS battled each other under warm conditions. Kathryn Mohr Menlo Atherton-CCS came away with the victory clearing 12'4". Sydney Jaques Presentation-CCS finished 2nd with a vault of 11'10". Annalisa Crowe Menlo Atherton-CCS was a triple victor with wins in the 1600 (5:04.86), 800 (2:14.31) and the 1600 relay (4:03.63). She helped pace the team victory for MA as they outdistanced 2nd place St. Ignatius-CCS 98-59.

The Bearcats Invitational took place just a few minutes away from the above invitational. A smaller meet, there were 6 marks that were considered Elite and a winning mark definitely stood above the rest. In the boys' triple jump, Semanu Attiogbe Woodside-CCS established a new meet record as well as the CCS #1 mark with a winning leap of 47'6". He will be tested tomorrow by Mt. Pleasant jumper Darius Carbin at the CCS Top 8 meet. On the girls' side, the best performance also came from the triple jump as Jenna Nwafor Evergreen Valley-CCS won with a leap of 37'1". 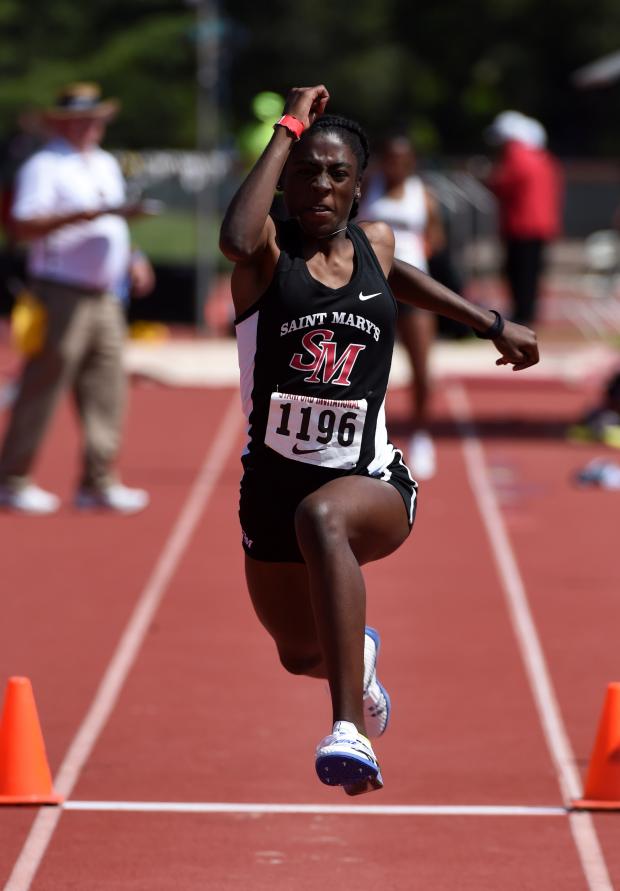 One of the more competitive meets in the Sacramento area attracted some of the top girls in the state. Leading the way was Kali Hatcher St. Mary's Berkeley-NCS who won the triple jump with a leap of 39'8". Sprinter/hurdler Kaylah Robinson El Cerrito-NCS won the 100 hurdles with a mark of 14.04. Hannah Davis Vacaville-SJS won the 300 hurdles with a season best 43.73 and the #2 mark in SJS behind teammate Jurnee Woodward.

On the boys' side, Jacob Sampson Vista del Lago-SJS dipped under 50 second mark in the 400 meters with a winning time of 49.35. Anthony Cable Rodriguez-SJS, a state meet hopeful, won the long jump with a leap of 22'6". In the discus cage, two throwers surpassed 150 feet as Jack Gabbard Vacaville-SJS won with a winning throw of 154'8" just ahead of Will Smith Willits-NCS (150'0").

Jasmine Pharms Stagg-SJS had the outstanding performance here with a winning shot put mark of 47'9.5". That mark puts her SJS #1 as well as #2 in California just ahead of Pamela Amaechi. In the 1600 meters, Jaxin Woodward Vacaville-SJS won with a time of 5:05.13. Sadye Peschke Bella Vista-SJS won the 300 hurdles with a time of 44.87.

While a lot of athletes stayed at home competing in the Northern part of the state, several top performers made the trek down south to the Mt. SAC Relays. Jurnee Woodward Vacaville-SJS scored a couple of fast times in the hurdles with 13.72 (100 hurdles) and 41.68 (300 hurdles). One of the attractions for athletes at the Mt. SAC Relays are the automatic bids for the Brooks PR meet. Rylee Bowen Sonoma Academy-NCS won the mile with a time of 4:47.26. Cooper Teare St. Joseph Notre Dame-NCS led wire to wire in the boys' 3200 with a near personal record 8:55.23. A couple of notable relay marks were San Leandro-NCS running 41.70 in 400 relay and Armijo-SJS preventing the Great Oak sweep of the Distance Medley Relay with a 2nd place finish and 10:14.58.

Looking Ahead to Weekend 9:

The big meet this week especially for Central Coast Section (CCS) athletes will be the CCS Top 8 Meet at Los Gatos HS. The weather is not supposed to cooperate but a little rain will not slow down most of the best athletes in the section. You can check out a preview of the meet which includes the top 10 performers at this LINK.