In no particular order here are ten athletes that might accomplish something special at this weekend's North Coast Section Meet of Champions.

1) Brighie Leach, Campolindo HS
The depth in the girls' distance races in NCS is quite impressive especially in the 3200m. The girl with the fastest time in both the 1600 and 3200 is senior Brighie Leach of Campolindo HS (4:50.32 and 10:20.36). She will be the favorite in both races and seems to be peaking at the right time but it will not be easy. Her main challenger in the 1600 is freshman Rylee Bowen of Sonoma Academy who ran 4:54.96 in the mile at the Mt. SAC Relays. She has also posted an impressive 2:13.66 in the 800. Bowen has proven to be a gutsy racer with a strong finish multiple times this season and will not make it easy for Leach. Both runners along with Brooke Starn (Monte Vista) and Megan McCandless (Granada) will double back to 3200m. and compete against several girls who are focusing on the 8 lap event like Morgin Coonfield, McKinleyville (10:20.72) and 1st time trackster, Toni Finnane, Campolindo (10:45.94). 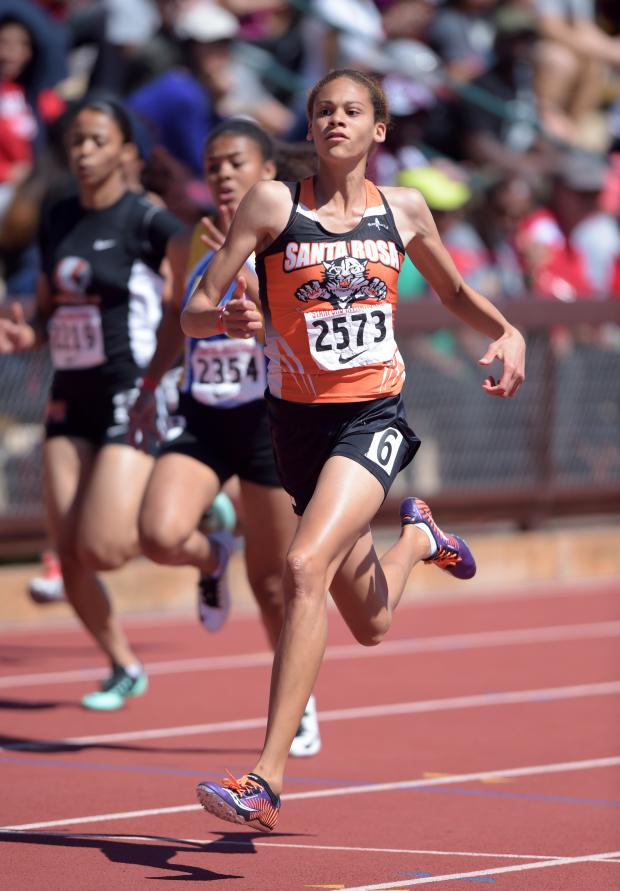 2) Kirsten Carter, Santa Rosa HSOne of the top freshmen in the state, Carter will compete in the 400, 200 and 1600 relay. She has also posted top 4 marks in NCS in the 100 and long jump and launched the discus over a 100 feet. She will not be the favorite in a stellar field in the 400 but don't be surprised if she claims 1st place. Her PR this season is 56.19 in mostly unchallenged races and she has also recorded sub 55 legs on the relay. She is the class of the field in the 200 as the only NCS athlete with a sub 24 second time (23.80). It will take a monster effort from her in the 1600 relay to get her teammates to the final but one thing for sure is you can never count her out.

3) Ja'Maun Charles, Amador Valley HS
Charles was the double sprint champion last year at the NCS MOC meet taking the 100 meters in 10.76 and the 200 meters in 21.60. He also anchored the 1600 relay team to a narrow 2nd place finish in 3:17.81. He qualified for the state final in the 100 meters finishing in 9th place and anchored the relay once again for an even more impressive 5th place finish. He is currently undefeated this season in the two sprint events with season best times of 10.63 and 21.62. Charles will be attempting to defend both titles this year which hasn't happened since Jahvid Best of Salesian in 2006 and 2007. He currently has the fastest time in the 100 and is ranked 2nd in the 200 behind only Elijah Lucy of Emery at 21.59. 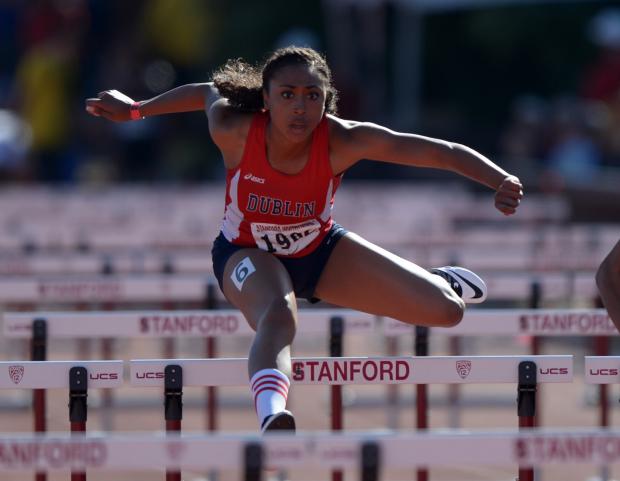 4) Mecca McGlaston, Dublin HS
McGlaston first made a name for herself as a sophomore at last year's Stanford Invitational when she defeated a talented field of NorCal hurdlers in the 100 meter hurdles. She finished 3rd overall at the Arcadia Invitational a week later but recorded nothing but first place finishes the rest of the season. She won her first state title running her best time ever at 13.54. Fast forward to this year and you would think it has been smooth sailing for her as she aims to repeat as section champion. The truth of the matter is that is has been a very challenging season with a nagging injury that hasn't allowed her to compete at her best throughout most of the season. She made her debut at the Sacramento Meet of Champions and after a rocket start managed to finish the race in 14.62. She seems to have righted the ship since with multiple sub 14 efforts heading into this weekend's action. State leader Jasmyn Graham of E. Roosevelt (13.21) loops ahead but don't count out McGlaston as she has proved many times already.

5) Drew Xandrine-Anderson, Stuart Hall HS
Stuart Hall won the Class A boys' team title for the 2nd year in a row powered by one of the top jumpers in NCS, Drew Xandrine-Anderson. He high jumped 5'10" to finish in 4th place and finished in 3rd place in the long jump with a personal best 21'9.75". The really impressive result came in the triple jump were he destroyed the previous 1978 meet record of Allen Kuhn (46'11.5") by jumping 49'1.75". From experience at the Class A meet, that record may now never be broken (I am serious!). That mark places Xandrine-Anderson in 2nd place overall in NCS behind only Ron Smith of St. Mary's Berkeley at 49'3". Seth Brooks of Kingsburg is the state leader at 49'9.75". If Xandrine-Anderson finishes in the top 3, he may become one of the rare Class A meet participant to qualify for a trip to the state meet. It's also possible that he may be the first. 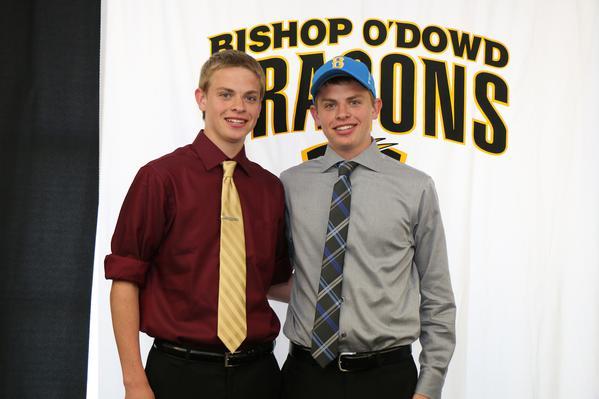 6) Colin Burke, Nick Downs and Sean Burke, Bishop O'Dowd HS
It's not often (more like very rare) when teammates have a legitimate shot at sweeping an event at the NCS MOC meet. This year, the trio named above have a realistic chance of taking the top 3 spots in the 3200 meters. At this point, Colin Burke (above on right courtesy of Bishop O'Dowd) is ranked 1st by a significant margin at 9:00.40. His teammate, Nick Downs is ranked 2nd at 9:18.98. Colin's twin brother Sean currently has the 5th fastest time in NCS at 9:24.58 trailing only Cooper Teare of St. Joseph Notre Dame (9:19.46) and Jordan Scobey of Maria Carrillo (9:23.14). While the times are not as fast as they have been in the past few years, the subplot of the potential sweep while certainly add some space to this race.

7) Heidi Fuhriman, Monte Vista HSFuhriman made quite a debut as a freshman in the 800 with a 2nd place finish at the 2013 NCS MOC as well as running 2:12.00 in the trials at the CA state meet to qualify for the final. She missed all of last year's Track and Field season but has made a nice comeback this season and will be the favorite to win the 800 this Saturday. She has a season best time of 2:14.05 along with a great kick at the end of her races. The two girls ranked ahead of her on the NCS 800 list (Rylee Bowen and Chloe Jenkins) have chosen to pursue other events which makes the road to an NCS title that much easier for Fuhriman. While this could potentially be her first section title, it would not be the first section title for the Fuhriman family. Brother Trevor won the NCS MOC 1600 meter title in 2012 running 4:13.09, just ahead of Thomas Joyce of Campolindo at 4:13.40. I would have to do some research but are there other brother and sister section champions?

8) Nathan Esparza, Amador Valley HS
When you are a boy in the Esparza family, there are a few expectations. First is that you throw the shot put and discus. Second is that you throw both of those implements a long way. Third is that you qualify to the CA state meet and then attend Cal. Oldest brother Scott qualified to the CA state meet as a senior in 2010 in the shot put placing 3rd at the NCS MOC (53'9.5"). Middle brother Matthew upped the ante by winning NCS titles in both the shot put and discus as a junior and senior (2012/2013) and best of 61'0.25" and 171'0" respectively. Little brother Nathan throws the shot put and discus. Check. He also throws both implements far. Check. Currently, he holds the top marks in both events in NCS at 59'9.25" and 172'2". He will be a strong favorite in both events and qualify for his first state meet. As for Cal, we will see.

9) Nicholas Rauch, Casa Grande HS
If you look at the history of NCS, you can find many athletes who won multiple events in the same meet. When it comes to the prospects of winning the 1600 and 800, chances are very slim in completing that double victory. Last year, Casa Grande junior, Nicholas Rauch finished in 2nd place in the 1600 and 5th place in the 800. He will attempt the same double this year and try to be the first NCS athlete to complete the 1600/800 double since Jon Stevens in 1998. It will definitely not be easy and he will have plenty of competition in both races. Check out the list below of all the previous boys who were able to complete that double thanks to Stephen Rauch.

10) Elijah Lucy, Emery HS
As mentioned above, it's rare for athletes from the Class A Meet to qualify to the state meet in the speed and technique events (unless your last name is Purvis). Emery senior, Elijah Lucy will attempt to make the state meet in either the 400, 200 or long jump. His qualifying time in the 400 is 49.68 which ranks him 6th overall. His qualifying time in the 200 is 21.59 which is the fastest mark coming into the semifinals on Friday. He also has the 3rd best mark in the long jump with his 22'7" winning effort at the Class A meet. He qualified to the long jump final last year placing 7th but this section meet could be a historic one for Mr. Lucy.

Who else do you think deserves mention? What other accomplishments may occur this Friday and/or Saturday? Feel free to include your own additions in the comment section below.