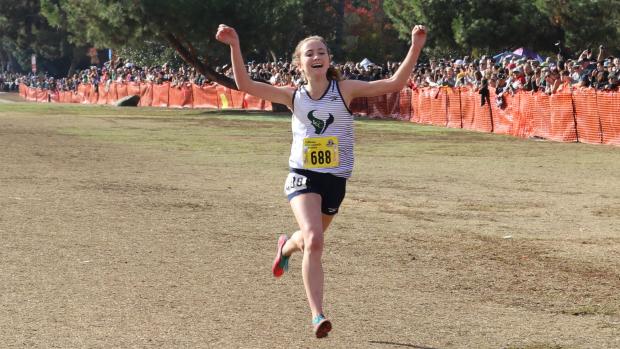 A year after not being able to finish the race, Kristin Fahy left the field behind at Woodward Park and celebrated as she crossed the line with the CIF-State Division II championship. (Jeffrey Parenti photo)

Kristin Fahy's recovery from a disappointing ending to her 2017 XC season actually began in the fall of 2018, where she reminded everyone of her exceptional talent, placing fourth at the State Track and Field Championships in the 3200 behind a trio of exceptional seniors.

Fast forward to this fall, where memories of her collapse with the lead in the final stretch of the State Division III XC final would linger throughout the season.

With that memory as motivation for redemption, Fahy put down a season that was darn near close to perfect, earning recognition as the MileSplitCA 2018 Girls Cross Country Runner of the Year. 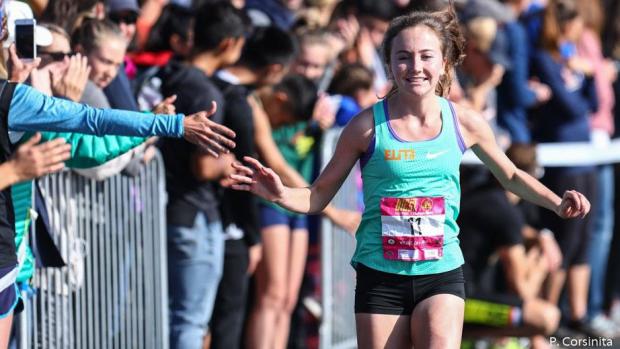 Fahy, a senior at La Costa Canyon in the northern San Diego County coastal city of Carlsbad who is headed to Stanford, swept through her invitationals, taking titles at Mt. Carmel, Stanford and Mt. SAC.

She followed that with her third San Diego Section division title, a runaway victory at the CIF-State Meet, and was the fastest girl on the course at Foot Locker West Regionals, qualifying for the FL National Championships.

Her 17:08.50 winning time at Stanford ranked as the fastest 5K in the state this season. Her 17:22.60 to win the D-II title at the State Meet was the third-fastest on the course that day.

"It went awesome," she told MileSplitCA's Dan Tyree after the State race. "I was super excited to come away with the win. "My plan was to stick with the leaders and if I felt good, maybe pull away. It's just awesome to end my high school (cross country career) on a high note."

From Steve Brand's story on Fahy's victory at State linked above:

"I didn't plan to go out too hard (it was a 5:29 mile). I wanted to save a little for the end," she said. "I wasn't worried about last year -- I'd never run that race before or after. I felt so much better than last year. Although I was ahead last year at two miles, I was starting to feel whatever it was. I knew I was losing it then.

At Foot Locker West, running on the 5K version of the Mt. SAC course where in October, running the 3-mile layout, Fahy was a runaway winner, she again was first across the line. Fahy beat Spokane's Allie Janke by 5.1 seconds to qualify for the national race on what was essentially her home course at Morley Field in San Diego. 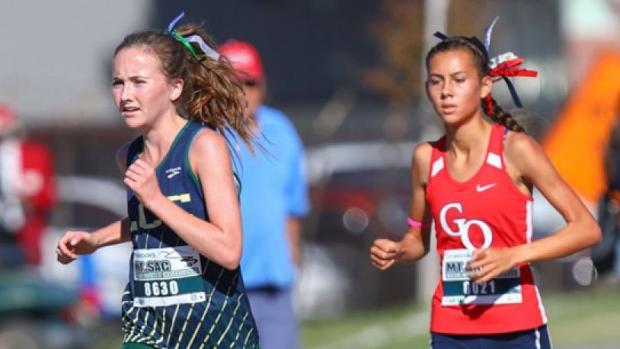 While the regional race would prove to be the end of her magical run -- she was 25th at Foot Locker Nationals -- Fahy had already built the most impressive resume in the state.

At Mt. SAC, her first time in the D1/D2 Team Sweepstakes race, Fahy was a 12-second winner over Great Oak junior Tori Gaitan -- the runner-up for this recognition -- and a 31-second winner over Walnut senior Chloe Arriaga, two other members of the MileSplitCA All-State First Team. (Fahy had previously only run in the D3 Sweepstakes race -- La Costa Canyon was moved to D2 for the 2018 season -- winning as a junior and sophomore and placing second as a freshman.)

At Mt. Carmel, where Fahy set a 2.x-mile PR of 14:59.10, she was a 32.10-second winner over Carlie Dorostkar, the CIF-San Diego Section Division I champion who was fifth at State.

And at State, her 17:22.60 time was 22.20 seconds faster than runner-up Maddie Coles of Claremont, the Southern Section D-II champion.

Fahy's victories in the elite race at Mt. SAC, at Stanford, State and Foot Locker West were all firsts for her.

Overall, Fahy won eight races her senior year and 20 over the last three years. During the last two seasons, she won 15 races, had two seconds and her 25th-place finish at FLN.

"I've had an incredible season," she said, during a post-race conversation at FLN. "A lot of firsts for me. ... There's not much more I could ask for. And I'm excited for track season as well." 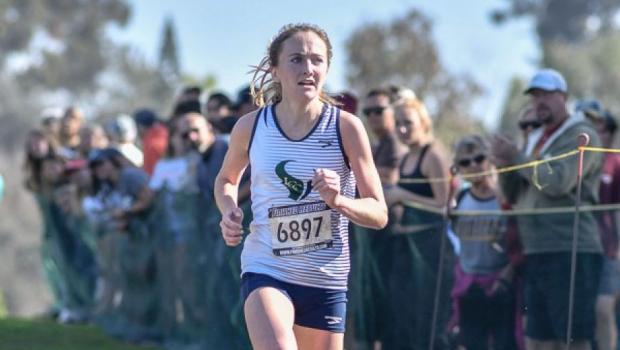