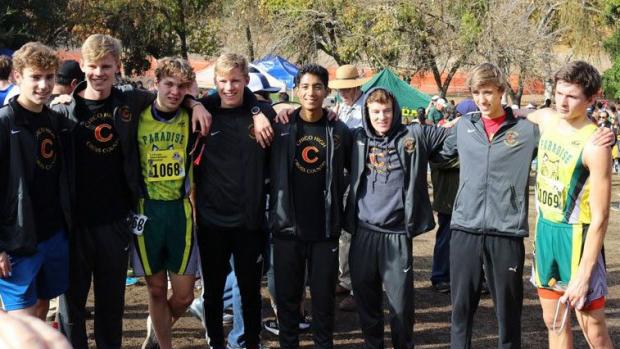 On the day the deadly Camp Fire was beginning to ravage the tiny mountain town of Paradise, most of the runners in the CIF-Northern Section had already made their way to West Valley High School in the rural outskirts of Cottonwood.

The trek is some 75 miles from Paradise, northeast of Chico, but not everyone was able to get there.

While the Northern Section held its championships on a warm but windy day, with Chico seniors Britta Bundy overcoming a fading Payton Osborne to win the girls race and Charlie Giannini running alone to defend his boys title, senior Gabriel Price was still in Paradise helping his family recover items from their home before the Camp Fire would, as it did with much of the town over the next couple days, take it away.

Price, a three-time CIF-State Meet qualifier who was among the favorites in the three-division boys cluster race, made national headlines a week later when word trickled out that CIF-NS meet director Scott Fairley, the West Valley Athletic Director, in concert with CIF-Northern Section Commissioner Liz Kyle, among others, arranged a special time trial to give Price an opportunity to run the state-qualifying time he was denied by the deadly fire. 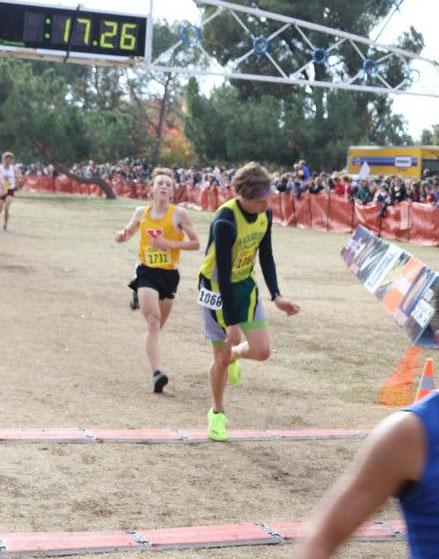 Price, with support from Giannini, Bundy, and other athletes from Chico High, did indeed run a qualifying time and went on to run in the CIF-State Finals, along with teammate Patrick Roehling, who had qualified at the section final. Two weeks later in Fresno, Price's time of 17:26.20 and 121st place finish was the best of his four years running at the State Meet. (Gabe Price crosses the finish line at the State Meet in Jeffrey Parenti photo at right.

While smoke from the Camp Fire filtered down into the Bay Area and affected the Central Coast, North Coast, Oakland and San Francisco section finals, it was too far south to impact the NS final beyond athletes in Paradise directly impacted on race day.

Earlier in the season, fire near Mt. Shasta forced the cancelation of of the Mt. Shasta Invitational, after flames jumped Highway 5 and forced intermittent freeway closures, making it uncertain if access to the meet for teams coming from the south would be available.

On the course, the section final was a celebration for Bundy, Giannini, the Foothill girls team that battled Chico to a one-point victory in the fastest top-two finish in section history, and the Giannini-led Chico boys that posted the fifth-fastest team time in history (83:06.30) in winning for a third year in a row.

In winning a second consecutive D-III title, Giannini posted the No. 11 time on the 3-mile West Valley course, 15:42.46. 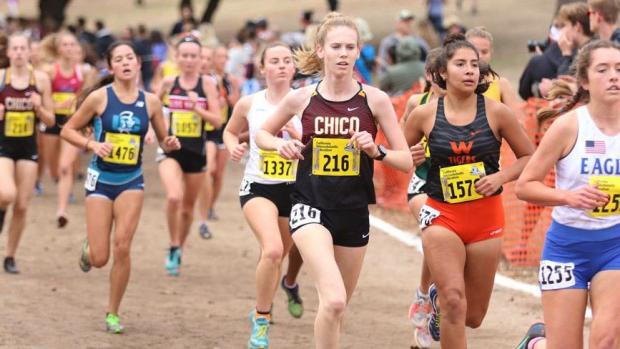 V, junior Alexis Ramirez won the individual title while leading Mt. Shasta to the team championship.
Among the girls, Sutter senior Mia Ashby won D-IV and Trinity senior Lauren Harper won in D-V. In the cluster race, where all three divisions run together, Harper was third overall (19:28.80) behind Bundy (19:07.54) and runner-up Payton Osborne of Foothill Palo Cedro (19:18.72). (Bundy is pictured at right running at State (#216) in DeAnna Turner photo.)

University Prep won the D-IV title with Durham taking D-V. All three of the girls teams won for the second year in row.

In the D-III girls race, Foothill posted the eighth-fastest team time in history, 100.02, with Chico running the No. 9 fastest, 100:04. This epic battle came a year after University Prep posted the No. 4 fastest time (99:06) and Foothill ran the No. 6 time (99:45), but those were in separate divisions, not head-to-head to determine a champion.

The section conducts four races at its championship meet. The all-division varsity race to establish division winners and State Meet qualifiers, and an "Open" frosh/soph race as a sort of view into the future. Through that portal, Mario Giannini of Chico, ran 12:12.16 over the 2.2-mile course, the second-fastest recorded among the boys. Also, Carsen Quintero of Chico, blistered a 14:56.42 clocking, the No. 5 fastest all-time among the girls.