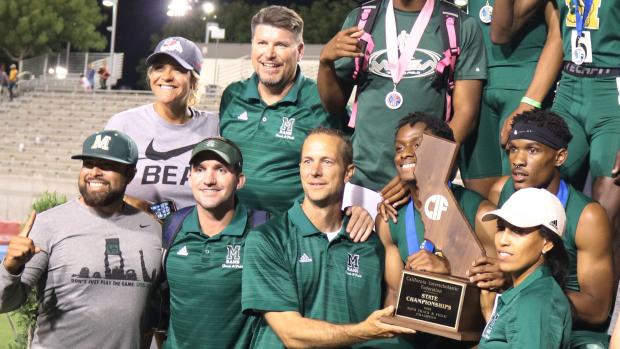 There was something about placing a distant third in the Southwestern League championship meet that told Murrieta Mesa head coach Aaron Ballou that he just might have something special come the first weekend in June.

Despite that final team placement in arguably the most difficult high school track & field league in the land, it was the results of that meet on a cold and damp night at Temecula Valley High School that confirmed for Ballou that he indeed had something special.

Something special is what happened next to the Murrieta Mesa boys team, which went from that third-place league finish to winning the CIF-Southern Section Division 2 team title and two weeks later, Ballou's senior-dominated Rams did the unthinkable and won the CIF-State Meet Boys Team title.

It was the first Southern Section divisional and State Meet team titles for Ballou -- the only coach the 10-year-old school has ever known -- and the Rams' program. For these accomplishments, Aaron Ballou is the 2018 MileSplitCA Boys Track & Field Coach of the Year.

"That's proof that it's harder to win the Southwestern League championship than it is the State title," Ballou said amid the post-State Meet celebration June 2 at Buchanan High in Clovis. "We've never been higher than third. It's pretty crazy."

Third in league, he meant, a league that includes two-time State champion Vista Murrieta, and and 2018 Southern Section Division 1 champion (in boys and in girls) and State Meet boys runners-up. Yep, you read that right. Two teams from the Southwestern League placed 1-2 at the State Meet.

The story of Murrieta Mesa's success includes senior sprinter Christian Shakir-Ricks -- a transfer from Cerritos Gahr High -- the emergence of senior Matthew Okonkwo, a handful of role players who stepped up when needed, and a strong supporting staff of assistants, including sprints coach Sandra Moya, a former Olympian for Puerto Rico.

Shakir-Ricks, who went to State with Gahr on a relay, came into his own as one of the State's elite sprinters in the 100 meters, 200 meters, and a ferocious anchor on both relays. The UC Davis-bound Okonkwo found success in the 200, 400 and on both relays. And the collection of  seniors Jeremiah Queen and Davonte Williams, and juniors Jermarcus Tate, Kenneth Williams, and Daniel Browne each played key roles in the team winning both the section and State titles.

"Going into league finals, talking to the boys," Ballou said in an interview between the SS divisionals and SS Masters, " 'We've got Chris and we've got Matt, and they're running great, but we're going to need some other points at CIF for us to win this thing.'

"That was probably the big turning point for the team, probably league finals," Ballou said.

At State, the 4x100 had a sub-par race and placed 5th. But that was the only bad news for the Rams.

"It's pretty crazy to think, after having that setback (in the 4x100), battling our way all the way back to first place," Ballou said in the aftermath of the team awards ceremony. "Davonte (ran a PR). Matt had a PR on the opening leg. These boys are amazing. I'm very proud of them."

During the late-May interview, Ballou was extremely complementary of his coach staff, including Moya, the sprints coach in her fourth season with Murrieta Mesa.

"She has great knowledge and just great love of track & field," Ballou said. "The kids love her ... she's been a huge asset to the program. A big blessing."

Okonkwo, in a written response to a question about the influence of the Mesa coaches on the team's success, wrote: "Coach Ballou and Coach Moya were more than coaches. The amount of support and hope they had for us was unbelievable.

"With Coach Ballou, he instilled onto the team since Day 1 that we were headed to State, no doubt. Coach Moya helped me gain a love for the sport. I now look at it as a privilege and not a chore.

"Because of them, our team gained trust and love for each other and it allowed us to come together to do something great for them and for everyone who believed in us."