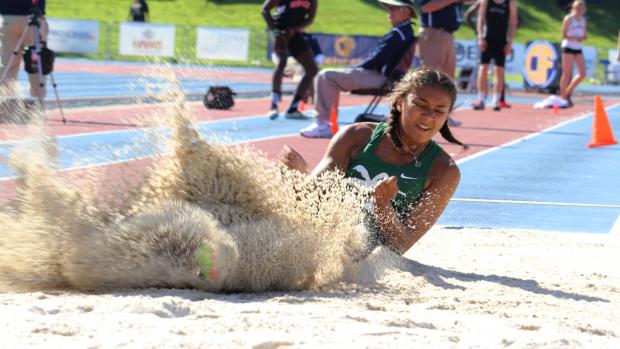 Coronado junior Alysah Hickey won the long jump and medaled in the high jump. She is among 10 non-senior athletes who won titles at the 100th CIF-State Track & Field Championships. (Jeffrey Parenti photo)

As we say goodbye to an exceptional senior class of champions and medalists from the 100th CIF-State Track & Field Championships, we look toward the future. And that future is extremely bright!

Consider that there are 10 State Meet champions in the classes of 2019 and 2020, five non-senior champions in each gender, 58 total non-senior medalists (top-six finish) who claimed 66 overall spots on the awards stand. This is for individual events. Girls team champion Gardena Serra (SS) returns all but one senior of the core group that performed exceptionally last Friday and Saturday.

There are 28 non-senior boys who won 31 medals and five titles. That group includes nine sophomores, two who won championships -- Matt Strangio (Jesuit) in the 3200 and Malcolm Clemons (St. Mary's) who won the long jump. There are 11 returning boys' medalists in the Southern Section, eight from the Northern Section, and four each from the Central, Sac-Joaquin and San Diego sections.

There are 30 non-senior girls who won 35 medals and five championships (one, high jump, where sophomore Rachel Glenn of Long Beach Wilson was a co-champion with senior Abigail Burke). The Southern Section has 20 returning athletes including two champions -- Glenn, and Deanna Nowling (Calabasas) in the 100 meters. The Central Coast Section will have six returning medalists, including pole vault champion Laurel Wong (Santa Catalina). The San Diego Section has three non-seniors who won four medals, including Alysah Hickey (Coronado), who won the long jump (and placed 5th in the high jump). The Central Section has two non-seniors who claimed three medals, including Jocelynn Budwig (Fowler), who won the shot put and placed 3rd in the discus throw. The Los Angeles and North Coast Section each have one non-senior medalists.

There are five girls in the class of 2020 who won medals, including Glenn, the co-high jump champ. There are six from the 2021 class, including Jacqueline Duarte (Chino Hills), whose 3rd place finish in the 1600 was the highest in the class.

Note: There are more returning State Meet individual champions for 2019 than there were for 2018.