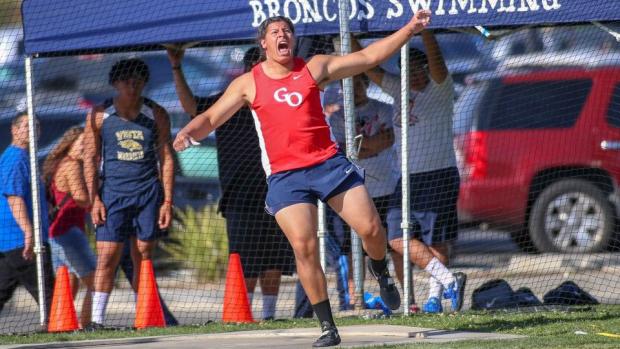 The Wolfpack should double the amount of points from their nearest competitor while scoring enough to win this just from their field events.  This would be their fourth title in the past six seasons. Senior CJ Stevenson is projected to win both horizontal jumps.   The duo of Jaime Navarro (Scott Padgett photo above) and Harrison Gould look to score between 22-26 points in the throws.  Ernesto Collazo will also challenge for the victory in pole vault.  Great Oak's 4x100 team should give the baton up to their anchor in first place while Carlos Carvajal looks to score between 10-12 points between the 1600/3200 combo.  Fabian Bodden in the 300 hurdles and Chris Verdugo in the 1600 are just an added boost.
2) Trabuco Hills (35-40 points)
Sean Lee should be a lock in the high jump once again.  Jake Burns in the 100/200 combo projects out to score between 14-16 points.  Where the Mustangs have gone up the charts is from Collin Hurd's improvement in the 110/300 hurdles. He projects to score between 10-12 points.
3) Upland (34-38 points)
Junior Caleb Roberson will lead off the 4x100 relay with sophomore Namir Hemphill on anchor.  Those two will score over 90% of their points as Roberson is projected to score more points as an individual than anybody else.  He's the favorite to capture both hurdles while finishing in the top four for the 100 meters.  Hemphill is projected to take 2nd or 3rd in the triple jump while scoring a point or two in the 200 meters.
4) Vista Murrieta (30-35 points)
. Parris Samaniego is the favorite in the 400 meters while the Broncos hope to finish in the top three for the 400 relay. Sophomore Hunter Escorcia will earn points in the 110 hurdles while freshman Darius Hill looks to finish in the top five for the long jump. Edgard Villa looks to unleash another furious kick down the stretch to finish amongst the top three for the 1600 meters.
4) Long Beach Poly (30-35 points)
The 400 Relay could decide the difference between the Jackrabbits and Vista Murrieta.  Kenyon Reed projects to score ten points in the 100/200 combo.  Kejuan Markham will line up with Reed in the 100 meters while Ereq Pye is projected to earn points in the 110 hurdles.  Both relays for Poly look to combine for 10-12 points.
6) Roosevelt (25-30 points)
Ethan Amata has gone the highest (15-4) of all qualifiers in the pole vault.   Jackson Taylor has run the top time (1:53.21) in D1 this season for the 800 meters.  Jalen Johnson should earn points in the 400 meters while he and Taylor bolster a 4x400 relay team that should finish in the top four.
7) Yucaipa (22-25 points)
Asani Hampton is the heavy favorite for both the 100 and 200 meters.  He also looks to anchor his squad into the top five for the 400 Relay.
8) Rancho Verde (20-24 points)
Rancho Verde looks to defend their Div. I 400 relay title while Carlton Johnson looks to finish in the top four in both the 100 and 200 meters.  Torre Smith and Jamar Simpson will look to earn points in the 400 and 100, respectively.  The Mustangs revealed their 'A' team finally for the 4x400 squad and they look to score within the top five.
9) Valencia (20-22 points)

Jacure Johnson continues to improve and will challenge for the win in the 400 meters.  He is also the stalwart of their 4x400 squad.  Tanner Berney is projected to finish in the top five for the Triple Jump.
10) Tesoro (18-22 points)

Ryan Bush will compete for the title in the 800 meters while Michael Robbins has come on strong this past month in the 110 and 300 Hurdles. 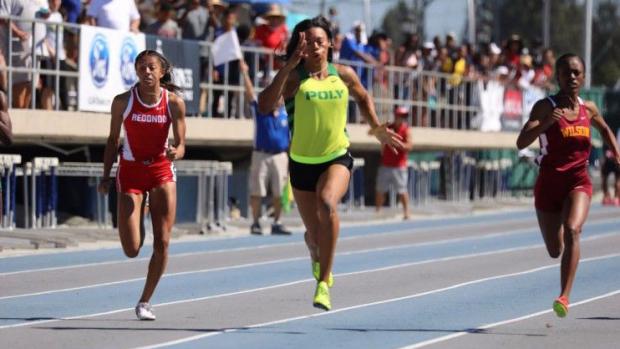 Can a team capture a title just from two events?  Great Oak is the only team in the Southern Section to advance five individuals in any one event (3200 meters).  They project to score between 48-52 points in the 1600 and 3200 meters combined!  Great Oak received a huge boost in qualifying freshmen Summer Stevenson and Sami Bollinger in the triple jump.  Those two project to score 6-8 points there.  Kolonnie Green looks to finish in the top five for the 300 hurdles and perhaps, set up the stage for the Wolfpack to clinch the title on the 3200 meters.  If Great Oak were to win, it would be a second D1 title in three years and only the third time since 2001 that a Long Beach school (Poly or Wilson) did not win D1 girls. And, if the Wolfpack girls were to match the boys creating a sweep of D1, it would only be the second time ever that a team captured XC and T&F titles for both genders in any division, matching the accomplishment of the 2016 GO program.

Ariyonna Augustine is a favorite for both the 100 and 200 meters.  Augustine (Ben Crawford photo above) will look to come from behind and bring home the victory for her girls in the 400 relay.  Kenya Payne will compete for the title in the 300 hurdles while Jaelyn Predium will try to finish in the top four for the 100 meters.  Crystal Fesili looms large in the shot put if they are take this beyond the 3200 meters.  Augustine back into the 4x400 relay lineup may be the key if it comes down to the last event.

Jada Hicks is the favorite for the 100 hurdles while also impressing in the 200 meters at prelims.  Chelsea Daye is the favorite in the long jump while teammate, Kennedy Smith could see the Highlanders score 18 points in that event.  Upland looks to defend their California-leading time (45.71) for the 400 relay but will have to give their anchor a nice cushion before Poly's Augustine comes from behind.
4) Roosevelt (34-36 points)

Breanna Bernard-Joseph looks to defend her 300 Hurdles title while also finishing in the top three for the 100 hurdles.  She anchors her 4x400 relay squad that projects to finish amongst the top four squads.  Lydia Liu has become a major factor in qualifying in both throws and projecting to score 8-10 points, combined.  Tessa Watkins will also score points in the pole vault.
5) Woodbridge (28-30 points)
With all points begin earned on the inside of the track from two individuals, Emily Garner and Madison Lyon are the favorites to take the two spots in the triple jump.  State meet finalist in 2017, Garner will look to finish in the top three in the high jump while Lyon is slated to earn several points in the long jump.
6) Ayala (23-27 points)

Mikaela Ramirez is up for the challenge to trying to break up the Great Oak monopoly in both the 1600 and 3200 meters.  She has run the fastest time of the group for the 1600 and the 3rd fastest for the 3200.  Madison Moneymaker looks to score 6-8 points from the triple jump and high jump combined while Anyssa Romo is projected to score in the top four for the long jump.
6) Dana Hills (23-27 points)

Dana Hills lead the state for the 4x400 relay, but Quartz Hill wasn't too far off that time last weekend.  Meanwhile, they project to score 4-5 to open the meet in the 4x100 relay.  Hailey Ray projects to score several points in the 300 hurdles while playing a major role in both relays.  In the discus, Rosalie Ballo should score major points for the Dolphins.
8) JW North (20-24 points)

Sydney Reid stepped it up at prelims in qualifying for both the 100 meters and the long jump.  She projects to score 8-10 points combined.  Amari Jenkins had one of the breakout performances of the meet last week and now projects to finish in the top five for the 300 hurdles.  Meanwhile, the greatest improvement we saw from any 4x400 relay team came from the Huskies as they could finish in the top five this next week.  Freshman Makayla Browne sent a message that plans on finishing toward the front in the 800 meters.
9) Chino Hills (19-23 points)

Zani Meaders is projected to earn 10-12 points in the 400/200 combo.  She anchors her 4x400 squad and are projected to earn a point or two there.  Freshman Jacqueline Duarte is the only individual, of both genders, to qualify for the 800 and 1600.  She is projected to score 4-6 points between the two events.  Meanwhile, Maraian Raymundo-Link looks to finish in the top six in the long jump.
10) Los Alamitos (18-20 points)

Delaney Sanacore is the favorite for the 800 meters while Faimalie Sale is the overwhelming favorite for the shot put.
Others: Redondo Union, Quartz Hill, Long Beach Wilson, Etiwanda, Mira Costa, El Toro