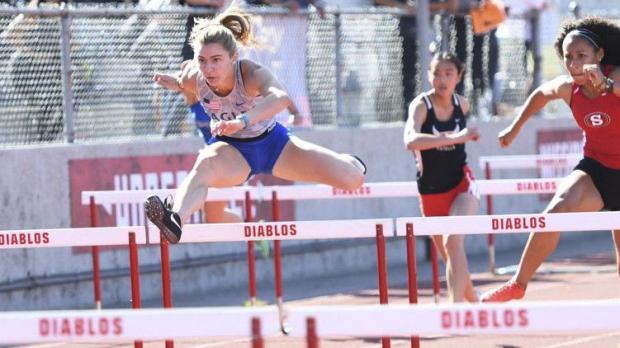 Trinity League Finals
The girls of Mater Dei and Santa Margarita fought for Trinity League supremacy.   Of course, this is before they embark on separate paths to capture the Div. 2 and Div. 3 team titles, respectively.  Both are heavily favored to bring back team champion plaques in two weeks.   No league claimed more at-large berths than this one. Aside from Mater Dei (Div. 2), this meet provided some great previews for the Division 3 Finals in two weeks.

Dropping the 200 for obvious reasons, Merritt's top ranked marks all came at the Trinity League prelims last week.  In capturing four league titles, her 42.23 at the league prelims remained #1 in California after a week of league finals.

But, there is much more than Merritt in the Santa Margarita arsenal.

Senior Gwynn George (Lizette Adams photo below) captured both league titles in the 800 and 1600, while she sits atop the Div. 3 lists for the 800 and owns the 5th fastest mark for the 1600.  Junior Tessa Green qualified onward and is projected to earn major points in both the 100 and 200.  Green will be seeking an individual title of her own as the 24.89 runner-up finish goes into the postseason as the top time for Div. 3.  In elevating up over 5-2 for the first time this season, junior Dominique Rubalcava put herself among the top five for High Jump, heading into the postseason.   The Eagles will also look to score CIF points in the 4x400 Relay as they earned the league title as well.  We've projected Santa Margarita's girls to score over 80 points in two weeks and defend their Div. 3 title, but next stop.... the division prelims next weekend at Estancia High in Costa Mesa.

The girls of Mater Dei also advanced the bulk of their core that looks to earn the Div. 2 title in two weeks.   In dominating fashion, the claimed the top four spots in Long Jump along with the top five spots for the Triple Jump.  They were hoping to advance more but they only earned one at-large entry so they will have to 'settle' with seven spots between the two events.  The trio of senior Dominique Ruotolo, junior Sophia Chiaramonte and freshman Jade McDonald are projected to advance next weekend and earn major points at the divisional finals.  The at-large entry went to Kelli Godin who is looking to help Mater Dei monopolize the jumps.  But, on the track, Godin is looking to earn major points on her own as she took 2nd in the 100 and then rolled to a new personal best of 24.83 to capture the 200 meters.  Mater Dei also claimed the top two spots in the Pole Vault, led by senior Lillie Boyer and her victory. Boyer's best of 11-1 is currently 5th in Div. 2.   Senior Maddy Dahlin captured the 400 meters while the freshman Jade McDonald rode Merritt's pace to a personal best of 14.77 in the 100 Hurdles.  She is projected for a finish in the top three in two weeks.   We've projected Mater Dei to score over 70 points with their entire crew present for the finals in two weeks.

Orange Lutheran sophomore Emily O captured titles in both throws.  Her 122-3 personal best moved her up the Div. 3 lists as she is favored to advance on to the finals in two weeks.  Sara Griffith, the Rosary senior, captured the High Jump championship at a height of 5-2.  In a tough competition, five girls cleared 5-0 with Orange Lutheran freshman Carter Bruning clearing the at-large standard.   JSerra junior Nadia Tabrizi captured the 3200 meters (11:20.50) just ahead of Orange Lutheran freshman Sophia Gutierrez (11:25.24).  This will be Tabrizi's 3rd straight trip to the postseason.

Moving to the boys, the results were more balanced amongst the schools.  Santa Margarita senior Blake Hennessay is ready to finish off his 2018 postseason on a high note.  Qualifying for the State Meet finals in both the 100 meters and 300 Hurdles in 2017, Hennessay tweaked his hamstring toward the end of the 100 meters and was unable to give it a go for that later race.  Looking as sharp as ever, he captured both titles here at the Trinity League Finals.  Taking advantage of the unfortunate late season injury of Servite's Julius Irvin, Hennessay rolled to a wind legal 10.75 in the 100.  That is the fastest mark of any boy in Div. 3.  In his victory in the 300 Hurdles (37.72), he is #2 there, right behind Harvard Westlake's Brayden Borquez.  Senior Sean Byrne took 2nd place in a close 1600 (4:16.52) and later came back to also qualify in the 3200 meters.  Meanwhile Tru Fulton qualified under the At Large standard in the 800 meters.  The Trinity League was the most competitive of all league finals as Fulton's 1:56.88 was 5th place and a 1:56.94 was only good enough for 6th place.  The league will monopolize the 800s and 1600s Div. III finals in two weeks.  Despite taking 5th place, senior Ian Howard qualified with a 4:19.16.  Five of the top six boys in Div. 3 all hail from the Trinity League.  Along with the 800, this was also the 2nd most competitive 1600 meter final in the Southern Section this past week.  Senior Lucky Nelson earned a runner up spot for the Discus.  Finally, senior Brendan Cormie captured the High Jump while both relays also advanced. 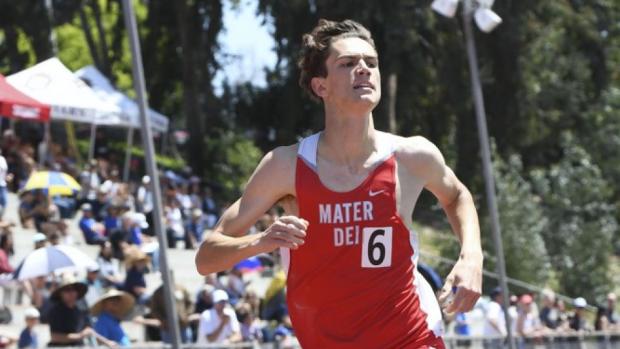 Mater Dei's boys are slated to compete for some hardware at the divisional finals in two weeks.  Senior Sam VanDorpe ran away with the victory in 1:53.15 and created that pace that allowed four others to break 1:57.  Amongst those four was junior John Wacker at 1:55.63.   This was over a second faster than his previous best and moved him up to the 6th best mark in Div. 2 this season.  Mater Dei took 4th in the 4x100 Relay, but qualified under the at-large standard while there was no standard needed when they ended the meet with their 3:20.41 victory in the 4x400 Relay.  Senior Tommy Brown captured both throwing events and is slated to earn the squad around ten points at the Div. II Finals.  Junior Titan Ruotolo captured the Triple Jump and qualified in the Long Jump.  Sophomore Bryson Washington placed 3rd in the 100 meters at 10.89, while junior Chad Lemmons qualified under the At Large standard with a 4th place 10.90 finish.  We currently have Mater Dei's boys tied for 3rd place in Division II, but with a couple breaks here and there, things could get real interesting in two weeks.

Servite was headlined by their hurdlers and Pole Vaulters.  In the Pole Vault, senior Pierson O'Connell had a huge breakthrough in elevating up over the 15-3 and is now #2 in Div. 3.  His previous best was 14-7, so his eight-inch improvement moves up to one of the best in the Southern Section.  Sophomore Nolan Blachowski also advanced in the event.   Junior Kyle Kimble captured the 110 Hurdles (14.72) while teammate, senior Christian Ojeda was right behind him at 14.99.  Going back on the 4x100, Servite took 5th in the event, but qualified under the at large standard with a 43.07.  Senior Vincent Sarino stepped up with a 1:55.88 for a 3rd place finish in the 800 meters.  Kimble, along with junior Nathan Lacson qualified in the 300 Hurdles as Lascon's huge personal best of 39.00 elevated him to #3 for Division 3.  Senior Lincoln Duran qualified with by achieving the at-large standard in the Long Jump.  Like their 4x100 Relay squad, Servite's 4x400 squad also qualified for CIF under the at-large standard.

St. John Bosco started the meet erupting with a 41.67 victory in the 4x100 Relay.  A seasonal best, they are #2 in Division III while being amongst the top five in the Southern Section.  Senior Diego Gonzalez was among the group of five for the 800 meters (1:56.38) to advance.  Meanwhile, senior Diego de la Torre took 2nd place for the 3200 meters.  With that 400 Relay led by junior Colby Bowman, he came back to take 2nd place in the 200 meters in a wind legal mark of 21.47.  This is now #2 in the section.  Senior Sal Spina qualified in both throwing events while junior Titus Toler earned a 2nd place in the Long Jump.  Finally, sophomore James Smith bounded out beyond 43 feet for a 2nd place finish in the Triple Jump.

The underclassmen milers of JSerra provided the fireworks for the.  Sophomore Anthony Grover prevailed in that epic 1600 meters with a 4:16.28 victory.  Grover was a rare double winner here as he came back to capture the 3200 Meter title.   Junior Peter Herold qualified under the at-large standard TWICE.  Earlier he turned the trick in the 1600 with a 4th place 4:18.71 effort.  In the 3200 meters, he just barely qualified with his 9:33.18 mark.

Not to be overshadowed by the exploits of that distance duo, senior Kelley Stephens blasted his way to a 21.44 victory in the 200m.  He goes into next weekend's prelims with the top seasonal mark for the event and is among the top seven in California.
Off the track, senior Elijah Jefferson burst to the victory with his 22-1 effort.
Orange Lutheran put on a clinic in the 400 meters by capturing the top three spots.  Senior Justin Lind led the parade with his 49.55 victory.  After rolling to a 42.81, 3rd place finish in the 4x100 Relay, junior Kyle McCray raced to a personal best of 10.80.  His 2nd place finish also places him as #2 going into the divisional prelims next weekend.  Away from the sprints, senior Kevin McNulty was a part of that incredible 1600 meter race, coming back with a 4:18.28 and 3rd place finish.  Riding the wave in the 800, senior Cameron Schmidt broke 1:57 and advanced, despite his 6th place finish.  Senior Michael Cohen qualified in both hurdles while needing to slip under the At Large standard in the 300 Hurdles (39.97).  Led by sophomore Ryan Bentley, Orange Lutheran qualified two in the high jump while also placing 2nd in the 4x400 Relay. 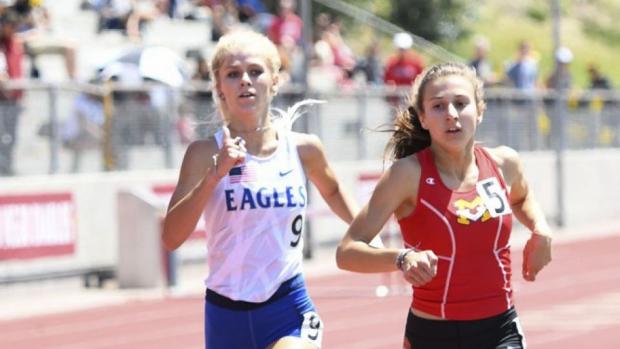 Gwynn George (left) and Ashley Johnson (right) are two of the top 800 runners in D3 and D2, respectively.