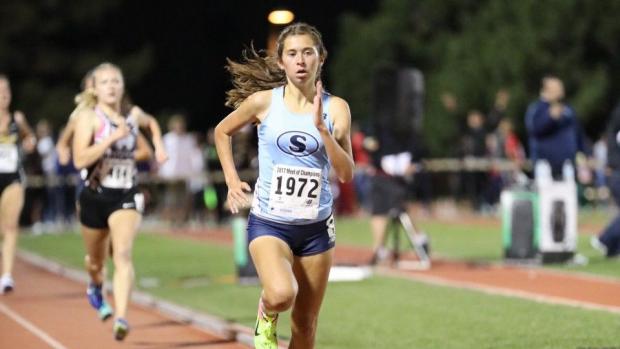 When the sun goes down, the lights simply shine brighter as the 3200 meters is loaded. Despite the 2017 national leader, Malibu junior Claudia Lane, waiting to open her season up next weekend, and the current national leader, Capistrano Valley's Haley Herberg, opting to focus on the mile, this field is still talented enough to push our leaders under 10:30!

Mission Viejo junior Kelli Hines held the national lead (10:32.03) two weeks ago until Herberg claimed that distinction the following day. Hines has put an injury-riddled sophomore season behind her and is in her greatest shape yet. Another junior in Ayala's Mikaela Ramirez has raced out of the gates with a great opening month. She pulled away for a convincing victory two weeks ago with a 10:35.07 effort against the Oak Park dynamic duo of Sarah Shulze and Sylvia Cruz-Albrecht. The former has a 10:20.92 to her resume as she rolled to a fifth-place finish at the 2017 California state meet. Cruz-Albrecht is the sixth-fastest returner in the USA.

Meanwhile, coming off of another California state XC title and NXN berth, Great Oak is represented by junior Fatima Cortes along with sophomores Tori Gaitan and Arianna Griffiths. This trio has already clocked under 4:59 for the 1600 while Gaitan cruised to an unmatched 10:34 victory last weekend. Based on the Winter Championships, Cortes is right there if not ahead of that fitness level of her teammate. Arguably, Cortes has experienced the greatest improvement of any elite runner in the state.

Last year, as Claudia Lane (10:21.21) controlled the entire race, emerging out of the pack to take second place was Saugus' Mariah Castillo (Ben Crawford photo). Castillo achieved that with less than an hour's rest from winning the mile (4:53)! Castillo is coming off a third-place finish at last year's NXN Cross Country Championships and impressed with a 10:43.82 dual meet solo effort last week. Walnut junior Chloe Arriaga comes in with a best of 10:34.30 after qualifying the California state meet in 2017 for the 1600.

Canyon of Anaheim senior Sara Leonard (10:25.64 personal best) is working her back to another great postseason peak. Leonard took ninth place at the 2017 state championships while earning an invite to NXN. Along with Great Oak, California's other NXN team automatic qualifying squad in 2017 was Claremont. As balanced as it gets, Kalinda Reynolds and Sydney Hwang produced sub-11:00 efforts two weeks ago while Hwang holds a personal best of 10:46. Don't overlook Foothill's Hannah Hall as she rolled to a sub-10:55 effort two weeks ago. It's a loaded field indeed with 10-12 girls capable of breaking 10:40.