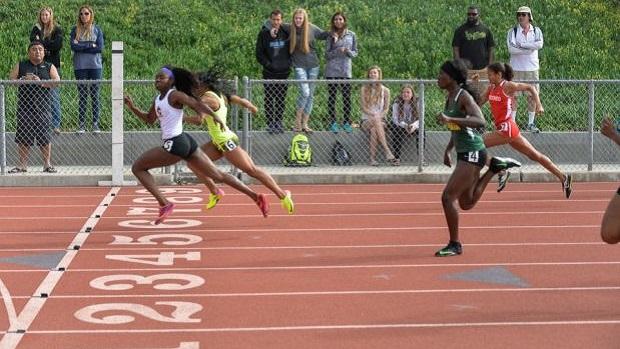 If you're not excited for this race, something's wrong with you! Day 2 kicks off with a loaded final section of this event, and combined with cooler temps there could be huge times. Mariah Castillo debuted last week with a 4:56.81 at Don Green, which probably puts her in the driver's seat here. Mikaela Ramirez ran 4:57 last spring and has a 5:02 so far this season, so she will certainly be within striking range (and at the very least could get pulled under 5 again). You can also expect Sylvia Cruz-Albrecht to be in the lead pack, as she also has a sub-5 PR on her resume. Her teammate Sarah Shulze opened with a 5:07 last weekend, and Saugus runner Jacqueline Cascione is right there as well.. Vacaville's Jaxin Woodward ran 5:01 in 2017, and then she had a breakthrough cross country season; this is her spring debut, but I personally can't wait to see where she's at! Keep an eye out for two talented freshmen: Audrey Suarez and Makayla Browne. Suarez doesn't have any track times on her profile (except a 400 from last week), but she ran 17:34 for 3 miles this fall. Browne, on the other hand, has clocked 2:16 for the 800 and 4:48 for 1500 in youth track competition, and that was before her monster debut season in cross country - so don't be surprised if she hangs with the leaders Saturday.

Justin Hazell makes his outdoor debut this weekend, and though he is best known for the 3200 he can turn a fast 1600, as well (his PR is 4:16, from 2017). Carlos Carvajal also ran 4:16 last spring, and he ran 4:05 for 1500 this winter  - then he opened the outdoor season with a 4:19, a strong signal that he has the potential to threaten the 4:10 barrier later in the season. Teammate Gavin Korby has run almost identical times this year, and Tyler Tickner isn't far behind, either.  Timothy Sterkel posted his PR of 4:18 last spring, as did Zach Arias; that should help create a deep lead group seeking to push under 4:20 this weekend. Xavier Court will be a wild card in this race, as his PR of 4:18 came during cross country season - but don't be surprised if he puts up a strong opening time. Kyle Pendleton could also bear watching: his PR is from 2016, when he ran 4:20, and he clocked 1:55 for the 800 last spring.

Breanna Bernard-Joseph is the #3 returner in the state in the high hurdles, and she opened with a 14.06 this season. That makes her the favorite, unless one of the next two girls has a breakthrough; Jazlynn Shearer and Tierra Crockrell are both in the 14.40's.

As good as Bernard-Joseph is in the 100 Hurdles, she's even better in the 300's: her PR is 41.91, making her the top returner in the state and #3 in the nation, and she has already run 43.62 this season. If the rain doesn't hinder her, she could very well better that on Saturday.  Kolonnie Green broke 45 last spring, but she may be hard-pressed trying to keep up with the best in California.

This is one of the few areas of the meet that lacks established stars - but sometimes that's even more exciting, because it fosters a very competitive race. Cody Kallenbach came within a hair's breadth of breaking 15 minutes last spring, and I can imagine that motivates him still, even a year later. Will someone else emerge as a potential star from this race?

Patrick Cundieff opened his season just above 40 seconds in the 300 Hurdles, and you know he wants to go ahead and break through that barrier right now. Lucas Antado clocked mid-39 last spring, which should put him right on par with Cundieff.

Deanna Nowling, the #1 returner in the state in the 100, is entered in the long sprint this weekend, and she's also very good there. The Calabasas junior clocked 55.84 last spring, making her the #9 returner in California. Teammate Tierra Crockrell clocked 56.40 in 2017, and Gabrielle Ellis was only one hundredth of a second behind (she has run 58.64 this season, too).

Jalen Johnson is a candidate for breakout star this season: after running a best of 49.55 last spring, he began the 2018 season with a 49.14, and he will be looking to break through the 49-second barrier this weekend. Also watch out for Lennard Marshall, who had a solid winter season and looks like he's primed to go sub-50 soon.

On paper, this is one of the standout events to watch. State champion Ariyonna Augustine will face off against the top returner by time at this distance, Deanna Nowling. However, if Nowling does run the 400 first, will that take the edge off of her legs? Another thing to watch here: the secondary race between some up-and-coming sprinters, who are getting their time in the spotlight while some of the state's stars are in New York for indoor nationals this weekend. Take Queen Okoh, for example: she has clocked 12.55 this season after barely competing at all last spring, and she had a good 60 time in all-comers competition, but she doesn't get much attention with Jazmyne Frost on her team. Chudney McGehee has a solid winter season, and she has a wind-aided 12.13 on her resume. Jazlynn Shearer is better known for her jumps prowess, but she ran 12.28 in 2017.

This race could very turn into a blowout, even with cool and rainy temps. Asani Hampton, the current California leader at 10.53 and the #2 returner from last outdoor season, will be very hard to beat in any race he enters. He pulled away from the field last year, and that is likely to happen again. The battle for second, however, should be intense between Christian Grubb and Naythn Scruggs, who both have PR's in the 10.70's. Redondo's Anthony Zuanich wasn't far behind at 10.83, so he could definitely be in the mix with a good race.

Delaney Sanacore is the girl to beat here, as she enters the season with the 5th-fastest returning time in the state at 2:11.15. You know her goal this season is to get under 2:10, and a strong opening race would certainly be a boost toward that goal! Sanacore should have a strong push from the field, too: Kalea Ibarra has a PR of 2:14, as does Jaxin Woodward (Cayla Etheridge also, but hers came two years ago). There are some other very interesting entries: stud milers Mariah Castillo, Tori Gaitan, and Sydney Hwang, plus super frosh Makayla Browne. Janiah Brown is a bit of a wild card here, as her PR is 2:15 but she has been inconsistent in the past.

Jackson Taylor is the current California leader with his time of 1:55.25, but he will have his hands full in this race with Peter Handy, who clocked 1:53 last spring. In fact, the race is pretty stacked, with 1:55 runner Kyle Pendleton and also Jacob Korgan (1:56 PR). That lead pack should take the pace out well, and hopefully that will result in good early times for others in the fast section, as well.

In complement to the two distance relays on Friday night, Saturday sports three sprint relays. The 4x100 goes earliest of these, and it should be fun to watch! Calabasas has everybody back from the squad that ran CA #2 46.02 last spring, and they lead the state right now with a very strong opening mark of 47.07. Long Beach Poly has to be the favorite with Serra's best sprinter out of state this weekend, but it could still be very competitive between the two powerhouse programs. Redondo ran 47.37 in 2017, and Los Alamitos is under 49 so far this season - those two teams will be set to pick off anyone from the top 3 that they can, or at lest to battle each other.

In the middle of Day 2 we will see the 800 Sprint Medley Relay, which is always tough to predict. Much of a team's success there depends on a strong 400 leg, but you certainly can't just ignore the 100-100-200 legs either. Long Beach Poly was the #1 team in California last year in this event, but they could have competition from Carson and Serra. A team like Los Alamitos could also sneak into the battle in an unpredictable race, which is part of what makes medleys so much fun.

The 4x400 is typically more predictable, but in the early season and after a long day in the rain, perhaps not as much. There are several strong teams entered, though, including regular powers Eleanor Roosevelt (they were #1 in California last spring) and Calabasas (#7). Serra has run 4:03 in 2018, good for CA #5 so far this season. J.W. North and Redondo could also contend in the fast section.

Clovis North opened the season with monster 4x1 and 4x2 times, leading the state by a wide margin with their time of 41.61 in the shortest relay. Dorsey had a very strong team last spring, clocking 41.55, and we can be sure that Long Beach Poly will have a competitive team.

In the 800 Sprint Medley, Poly has the depth to put together a strong squad, as does Serra. Calabasas is an up-and-coming boys team, and this would be a great opportunity for them to take the spotlight. Loyola is an interesting entry here, and it will be fun to see what they can run.

As was the case in the girls' 4x400, Eleanor Roosevelt is always a favorite in the boys' race - they finished the 2017 season at CA #2 with a 3:14 time. After them, though, it's anybody's race. Notre Dame (Sherman Oaks) could be in the mix, along with Serra and Long Beach Poly.