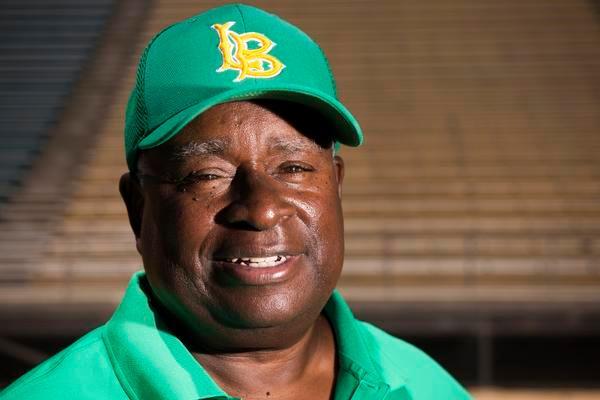 Foothill Technology coach Ken Reeves is a fellow coaching legend and this is what he had to say about longtime Long Beach Poly coach Don Norford (photo above courtesy of Orange County Register).
"One of the all-time great (if not the all-time great coach) coaches in the history of California high school athletics.  In addition to his track and field successes, he was a Jackrabbit football coach for 38 years and was named the high school football coach of the year by the NFL in 1996.   Had the honor of sitting at his table when he was inducted into the CIF SS Hall of Fame.  He has raised the bar so high in the area of track and field, it would take a take a world record coaching effort to come to be considered in the same sentence with Don Norford.  He is the standard."

In 2005, Sports Illustrated ranked the top 25 high school athletic programs in the entire United States (approximately over 38,000 schools at the time). They based their rankings on championships won as well as college athletes produced. When it was all said and done, the NUMBER ONE ranked high school athletic program was Long Beach Poly. You can check out that article at this LINK. 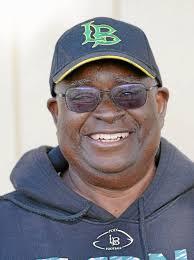 Coach Norford (photo to right courtesy Stephen Carr/Daily Breeze) was the Max Preps girls coach of the year for all sports. As noted above, he was inducted in the CIF SS Hall of Fame. On March 8, 2018, Coach Norford will be an inductee as part of the first class in the National Track and Field Hall of Fame. Along with legendary coach Joe Newton, Norford is the only other coach inducted into the first class. An amazing achievement for a true all-time great.

If you want to learn a bit more about coach Norford, check out the two videos in the next two pages. While he did win many championships, his lasting legacy will be with the relationships that he made with many of his athletes. Crystal Irving, who graduated from LBP in 1998, joined his staff in 1997 and took over the program after his retirement. She helped mentor 100 and 200 meters California state champion Ariyonna Augustine last year. I think both videos capture the appreciation of Coach Norford by so many LBP athletes.