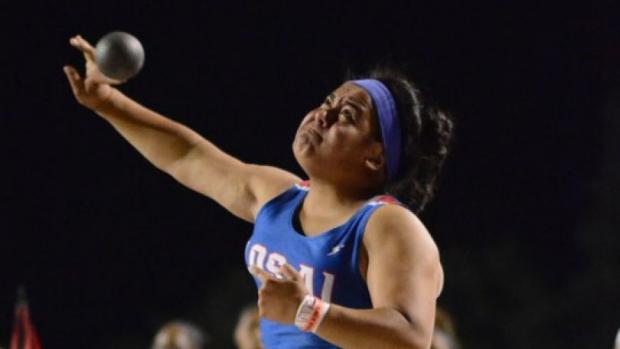 Faimalie Sale (Los Alamitos) won the weight throw and was second in the shot put at the '17 championships
Saturday marks the fourth of five weeks of Winter Championships qualifier meets, with five meets across the state, the most of any single Saturday in advance of the Feb. 17 championship meet at Arcadia HS.
Del Norte HS in San Diego, Los Alamitos HS in Orange County, Roosevelt HS in the IE, Thousands Oaks HS in NW Los Angeles and Turlock HS in the Central Valley are the host schools for this Saturday's official Winter Championships Qualifier meets. All five are scheduled to start at 9 a.m.
There have been eight qualifier meets to this point with four more to follow on Feb. 10, the last chance for athletes hoping to qualify to compete Feb. 17.

Athletes must post marks better than those listed at a qualifying meet in order to compete Feb. 17.

(a) Weight throw entry is by email only to Rich@vsathletics.com

(b) Pentathlon entry is by email only to RichGonzalezTrack@gmail.com and matt@vsathletics.com

(Through three of five Saturdays of qualifiers)