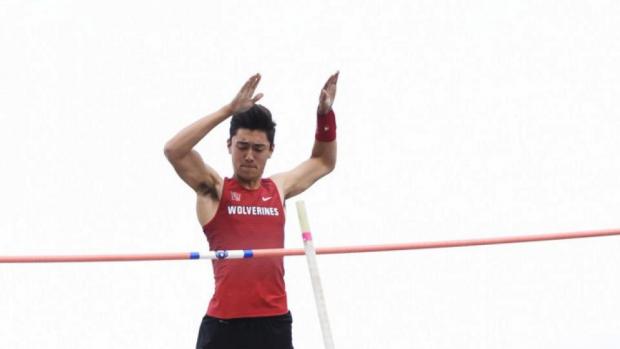 And then there is Davis High transfer Sondre Guttormsen, who  eclipsed 18-0, setting a Norwegian junior record on the way to winning the High School Boys division by four inches over Zachery Bradford of Bloomington (IL).

In an event dominated by seniors at June's CIF-State meet, Seireeni was one of only two non-seniors to make the 10-jumper field for the Saturday night final. His 14-4 clearance for 10th place was not only six inches below what he had done the day before in prelims, it was 14 inches below the PR he set two weeks prior in placing second at the CIF-Southern Section Divisional finals.

Last winter in Reno, Seireeni cleared 13-2. That's a 2-foot, 10-inch improvement YOY. He was one of 12 high school vaulters at this year's event to clear at least 16 feet.

Kevin Ward, a senior at San Dieguito Academy, the San Diego Section champion and the other returning CIF-State finalist, cleared 13-10 in Reno. He vaulted 14-9 for second at the Winter Championships last February and has an outdoor PR of 15-1.

Huntington Beach Marina junior Skyler Magula went 15-4, a major YOY improvement from 12-10 as a soph at Reno and well over his outdoor PR of 14-0 from last spring's CIF-SS D2 prelims.

Here's everyone from CA who cleared at least 13-0.

There were 145 boys from CA with results from the National Pole Vault Summit. Click here for the complete list of results.