Dorsey is almost as dominant on the boys' side as Carson is on the girls'. The Dons' strength is in the sprints and hurdles, and they also have strong relays (recognize that pattern?). They're not quite as deep as the Colts, though, and that opens the door for some more competitive races across the board. 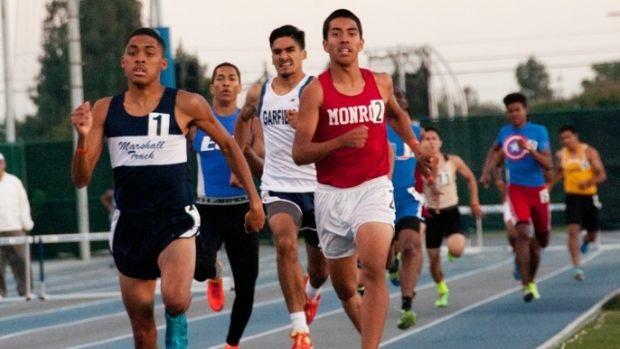 The 100 Dash is always fun at this meet, and this year should be no exception. Antoine Williams is the favorite to win and advance, although Jaques Wilson is close enough to be a serious threat to take the gold away. The race for the final state meet spot should be HOT: Dylan Thomsen, Dejonte Thomas, and Arrun Palacio all have season bests within 0.12 of each other. The 110 Hurdles appears to be even more jumpled coming into the meet- behind favorite Dakari Douglas (see below), the rest of the field is grouped between 15.12 and 15.53, which means that just about any of those 7 athletes could advance. Vincent Woodard, Andre Butt, and Eddie Cooper are the best bets, but they must run well or be overtaken.

You can see a similar situation brewing in the 800 Run. Carlos Martin del Campo (above, right) is the favorite and should win, having run 1:56.12; the only thing that could hold him back is fatigue from running the 1600, where he is also entered. Behind him, the race is wide open - Leo Jimenez, Shannon Turner, and Hunter Parker will be fighting it out for two state meet spots, and two other runners could also be in the mix.

Although Dorsey is the favorite in both relays, the 4x400 should be intense. Even if the Dons hold true and win, the battle for 2nd and 3rd between Hamilton, Carson, and San Pedro could be amazing! Don't be surprised if Eagle Rock or Granada also gets involved, as their season bests are only a second behind San Pedro.

Both the Long Jump and the Triple Jump should be interesting to watch. Each features a clear favorite (Bailey Jones in the former and Arrun Palacio in the latter), and both also have several contenders to advance to Clovis. In the long jump, three young men have season bests in the low 21's: Rogee Gibson, Angelo Moulic, and Julian Williams. The problem is, sometimes those season bests come from small meets where wind isn't recorded (and, if we're being honest, marking and measuring isn't always perfect at small local meets anywhere). In the triple, Jones may find himself competing with Daejon Crawford and Josiah Laney for the right to move on. 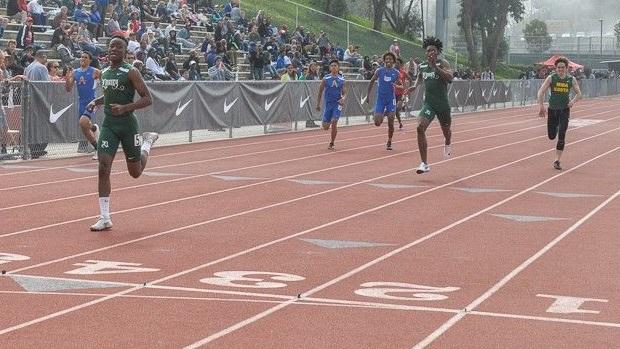 Dorsey is powered by two stars that are virtual locks to win a pair of events each. Mark Nunez (above) is the top seed in the 200 and 400, and he has something to prove the next two weeks after failing to make the finals at the 2016 state meet. Likewise, Dakari Douglas is the favorite in both hurdle races, although the 300 is the event where he is most likely to be competitive next weekend. Of course, these two also help to power the Dons' great relays, especially their 4x4. Both are seniors, and you know they want to make a splash before their high school careers end!

In most years, this section has at least one distance star. A few years ago it was Palisades' Marisa Williams, and right now it's Justin Hazell. His time in the 1600 is misleading: he can go MUCH faster than the 4:23 he has posted this season. The question is, will he? His best race is clearly the 3200, where he clocked 8:54.78 at Arcadia, and he could be focused on what is shaping up to be a monster of a race at the state meet.