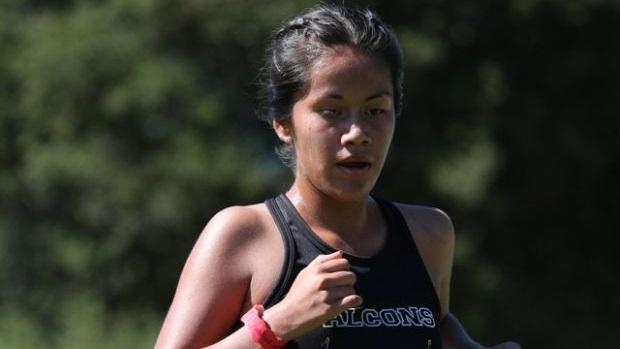 The 1600 Run will be one of the most competitive event of the day. Jennifer Perez (above) has the best time on the season at 5:12, making her the favorite over Elizabeth Rene, who has run 5:15. The race gets more intense behind them, as three girls with PR's of 5:19 or 5:20 will fight for the final spot in the CIF State Meet: Lauren Delgado, Jicel Fernandez-Ramirez, and Tonya Larbaoui. The 800 Run could be exciting in a different way, as the top 3 are closely matched but clearly separated from the rest of the field. Maya Richardson, Brittany Darrow, and Rene may find themselves battling for bragging rights and points while all three advance.

The 100 Dash should also be interesting, although Kenyla Miles is the favorite to win. Behind her, though, the battle for the other two qualifying spots could be intense. Elani Rice, Saundria Martin, and Angelina Camelo are the top candidates.

Both relays are worth watching, if only because Carson hasn't seemed to put out their best effort in either so far this season. One of these races, though, you have to think they're going to bust out and show that they're a threat to break 45 in the 4x100 this season! And with two 56's and a 53 in the open 400, you KNOW they can go faster than 3:52 in the 4x400, as well.

Two of the field events stand out because there are no standouts. In other words, with no strong favorites to control the events, the door is wide open for several athletes to get through to state. In the High Jump, Chiara Berruto is the only athlete that has been over 5 feet this year, but the really interesting part is that six girls come in with season bests of 4' 8" to compete for the final state meet spot. Similarly, the Shot Put features 5 girls between 34' 1" and 35' 1", 4 of them between 34' 1" and 34' 6"! That should be quite the battle for only three advancing slots. 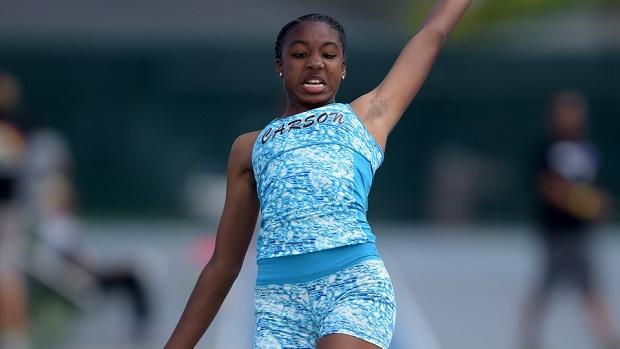 Kaelin Roberts is an obvious candidate here, but that doesn't make her any less fun to watch! The defending state champ in the 400 has kept a relatively low profile this season, but still has season bests of 23.88 and 53.76. Her team aspirations might work against her next week, as she must run both events for points rather than focusing on winning one, but this week she will dominate. Speaking of dominant, Tyjai Boyle is the heavy favorite to win both hurdle races Thursday; however, she has a ways to go before she will be able to compete at the state level.

There are two more Carson stars to look for this week, and they get less recognition because they toil in the field rather than on the track. Jonon Young (above) is the top seed in the long jump, where she will battle teammate Jaylen Walker for the title. If she can get up into the 19's by next week's state meet, she could help Carson's repeat bid tremendously. In the triple, Young is ranked 2nd behind Crystal Washington, who has been over 40 feet and is also a threat to score in Clovis.