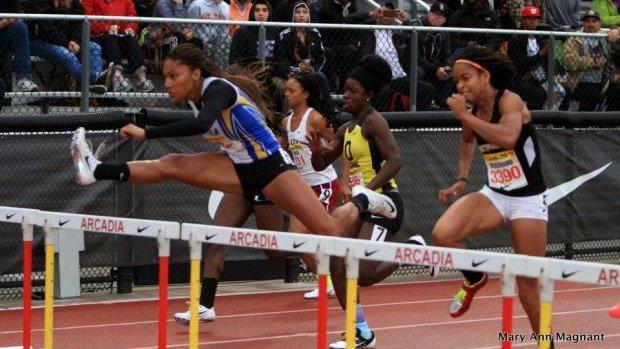 New Balance Nationals Indoor could hardly be farther away from California athletes, and yet every year some of our state's best make the pilgrimage to Manhattan to take on the nation's elite. Not only do they compete, but they have a tradition of bringing home championships from New York, starting with the Long Beach Poly girls relays back in the day and continuing through the present. Last year, stars from the Golden State have brought home three national titles to show for their cross-country travel: Lauren Rain Williams won the 200, Zaria Francis took the 60, and Darius Carbin claimed the high jump championship.

That's a tough act to follow, especially when you consider that there were three California winners in the years 2014 and 2015 combined. This year's CA participants were up to the task, and came awfully close to exceeding last year's standards!

Agoura senior Tara Davis (file photo above) continued her record breaking streak with an 8.16 time in the preliminaries of the 60 meter hurdles at the New Balance High School Indoor Nationals in the 4th heat. That time surpassed the previous record by .01 seconds previously held by Castro Valley's Sasha Wallace and set in 2013. The 8.16 was matched by Chanel Brissett of PA in the 6th heat. Davis arrived to her hotel room this morning at 3am which was very similar to another California athlete, Robert Miranda of Menlo, who arrived the previous night past 3am in preparation for his morning effort in the 2 mile race. Davis went on to lower her own record Sunday with an 8.14 victory in the finals. She also won the long jump with a mark of 21'2.75", and finished 2nd in the triple jump with her 42' 3.25" effort.

Other noteworthy performances by California athletes include: