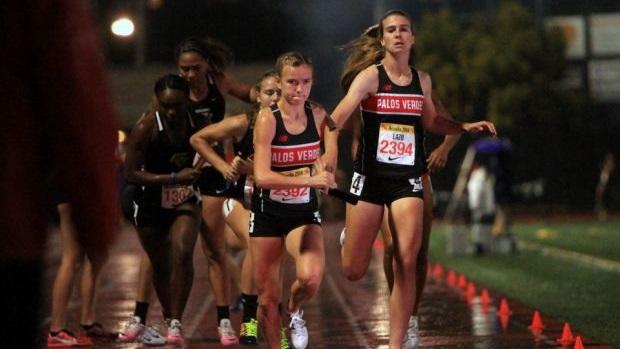 This may be a night that mostly consists of relays, but the 3200 always seem to be one of the most impressive races at this meet. Last year's 3200 saw two girls break 11, and an additional 28 get under the 12 minute barrier. The boys race was nearly as impressive, and despite no sub-9 performances, a whopping 41 got under 10 minutes.

In that notoriously fast girls 3200, there's no shortage of potential victors. The favorite is likely Cal-commit Annie Boos of Claremont, who ran as fast as 10:54.25 last spring. She didn't stop there, continuing to impress in the fall with a 17:01 three-mile and a 14th place finish at the D II state meet. That said, she'll won't have an easy run of it, as an array of challengers should be right with her. Some of the other top names include Bishop Amat's Trinity Ruelas (3rd at D IV cross country state), Great Oak's Sandra Pflughoft (who has run a 10:57 this season), and Natalie O'Brien of Flintridge Prep (who has already been within two seconds of her 11:06 PR this season).

On the boys' side, last year's top returner is back for another go at it. Dos Pueblos' Hunter Clark finished 12th a year ago, but will surely be looking to improve on that as he was only beat by runners from the class of 2016. While Clark is the top returner, the favorite may be Claremont's Ryan Renken, who capped an impressive 2016 track season with a 13th place finish at the California State Championships, and boasts an impressive PR of 9:02.59. Could this be the meet where he surges below nine minutes? Other top contenders include Ayala's Steven Khan (2015 D II CIF State Champion) and Crescenta Valley's Colin Fitzgerald (12th at 2016 Footlocker West Regional).

After the 3200s come the DMRs. The girls race was won by Palos Verdes last year in a blazing 12:21, and the Sea Kings will be back to defend their title again this year. But they'll have to get by top-ranked Great Oak to do it. On the boys side, the home school won the title last year, and Redondo Union will be hoping for more of the same in 2017. They'll be challenged by Roosevelt, Great Oak, and West Torrance, to name a few.

While Friday may be known for the distance races, the shot put and discus finals are also contested that night, and some big performances should come out of those events.

In the boys shot put, big names include Kylan Wilborn of Notre Dame, who has already heaved 59' 9.5 this season, and his teammate Jordan Palmer (54'1). It'll be hard for anyone to crack the Knights' duo, but that won't stop Saugus' Blake Walkowiak and Canyon's John Elam from trying to close the gap.

The girls discus field features Los Alamitos' Faimalie Sale. Sale finished 3rd at this meet last year, and has the state's 3rd best Shot Put mark on the season. The top freshman from last year is back as well in Natalie Ramirez. Now that she's a sophomore, she'll be trying to improve on her 96' 04 mark from a year ago and close the gap on Sale.