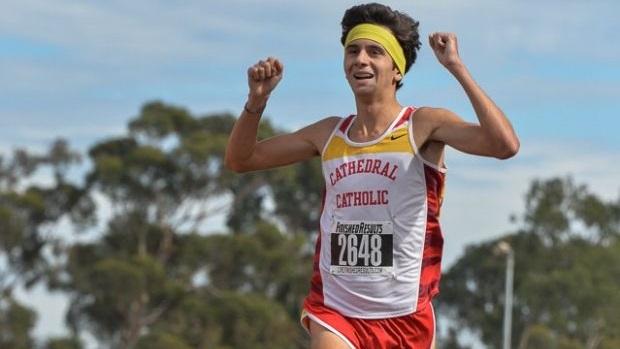 Opportunity meets preparation for Joaquin Martinez de Pinillios this weekend: graduation and realignment cleared out everyone who finished ahead of him last year, and he has taken a big step forward.

One of the biggest stories of the day is the Palos Verdes girls' pursuit of an NXN bid. They start out at a big disadvantage: they aren't in the same race as the other two contenders, Division 1 powers Great Oak and Davis. The Sea Kings also have the last race of the day, which historically has meant slower times (although it looks like this year the weather will not punish them, with a forecast high of 61 and a slight chance of rain). After holding out at least one runner in each of their recent major races (different runners each time) to keep them healthy, the team is expected to be 100% this weekend. If Palos Verdes pulls away for the win as expected, it would be a big change from last year, when the top two teams were not from the Southern Section. Aptos is the defending champion and will be in contention again this year, as will the 2015 runner-up, La Costa Canyon. Behind those three teams are several others that might be battling for 4th place: Esperanza and Laguna Hills from the Southern Section, Redwood and Campolindo from the North Coast, maybe Rio Americano and Vista Del Lago from the Sac Joaquin.

One thing that helps the Palos Verdes cause: there are some very strong girls in this race to help push the pace up front. Redwood teammates Glennis Murphy and Gillian Wagner both broke 17 at Hayward last weekend, showing that they are more than ready to conquer Woodward Park. For reference, neither Morgan Coonfield nor Megan McCandless accomplished that in 2015, and both went to NXN as individual qualifiers. Marea Zlatunich (Aptos) was not challenged in her Central Coast Finals win, and should be in the lead pack from the beginning this weekend. Of course, the Sea Kings have their own weapon up front in Mazzy Genovese, who dominated her race in Riverside last weekend. Sylvia Cruz-Albrecht (Oak Park) stayed the closest to her in that race, and she could sneak into the top 5 with a strong performance Saturday. La Costa Canyon brings two contending individuals in Kristin Fahy and McKenna Brown, both of whom are capable of making the podium. It wouldn't be surprising to see Hannah Ruane (Campolindo) in the chase pack. The possible breakout star of this race is Sophia Karperos (Rio Americano), who has had an outstanding freshman season.

This division was dominated by Southern Section teams in 2015, taking 4 of the top 5 spots including the top 2. Brea Olinda is back to defend its title, but the Wildcats were beaten solidly by West Torrance last weekend, making the Warriors the favorites this weekend. Paso Robles and Cathedral City were the next tier of teams coming out of the SS finals, but this might not be as dominating a group as last year. If so, there are several squads from other sections ready to claim spots in the top 5. Campolindo and Redwood are both strong contenders from the North Coast Section, having been separated by only 7 points from each other last weekend (although the two were 70+ points ahead of the third-place team). Cathedral Catholic could have the low stick (see below), but they were defeated narrowly by La Costa Canyon at the SDS Final, with both teams looking strong enough to be a factor on Saturday.  St. Ignatius College Prep could be a dark horse to crack the top 10, as well.

The top 6 runners from last year's D3 race have moved on - 5 graduated, and Callum Bolger moved to D4. That leaves the door wide open for Joaquin Martinez de Pinillos (Cathedral Catholic), who has looked like a title contender all season. Jared Yabu (Campolindo) is the #2 returner from the 2015 state meet, but he was defeated by Liam Anderson (Redwood) at last weekend's NCS meet. A trio of Southern Section runners will try to work their way into the top 5: the Rubidoux duo of Erik Gonzalez and Kevin Ramos, plus Trad Berti (Paso Robles). Fresno's Evert Silva has run well all season, and he has two advantages here: he is well rested, having cruised to a 15:30 while winning by 52 seconds in the Central Section final, and he gets to sleep in his own bed Friday night. Andrew Skoy is an interesting contender: the Shasta senior has competed well against some of the best in the state all season, and he could be a sleeper to contend for the title Saturday.