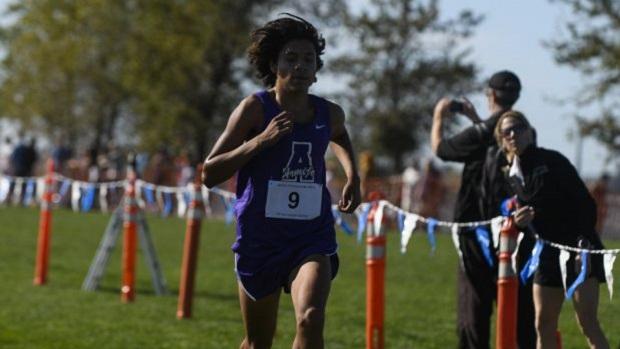 Luis Grijalva (Armijo) has become the state's biggest individual star on the boys' side this season after defeating both Cooper Teare and Michael Vernau.

The CIF Cross Country Championship is arguably the most competitive state meet in the nation, and in most years Division 1 has the most competitive races of the meet. Known for teams like Great Oak, Dana Hills, Arcadia, and Davis, we see some of the most thrilling races each year come from this division. In recent years these teams have put on some spectacular performances, capturing the attention of cross country fans everywhere.

This year, the Great Oak boys look to successfully complete their 3-peat and qualify for NXN once again. Although they had a bumpy start to the season, placing 3rd at Woodbridge, the Wolfpack went on to win at Stanford, Asics Clovis, and Mt. SAC, not to mention the CIF-SS Finals. This impressive pedigree ranks the boys among one of the top teams in the nation - they are currently 7th in our national Saucony Flo 50 rankings. Their quest to win a third consecutive state title will not come uncontested, however, as Dana Hills and Madera South are their biggest competitors. Currently ranked #2 in the state behind Great Oak, Dana Hills has finished runner-up to the Wolfpack in both 2014 and 2015. With their last state title coming in 2009, the Dolphins want to taste victory again. On the flip side, Madera South has never won a state title. They came close in 2013, finishing runner-up. Both these teams are very real threats to the standing of Great Oak, so be on the look out for their runners to make strategic moves and exploit the inexperienced runners who make up GO's top seven. Senior Solomon Fountain is the only returner from last years championship team, so for the other six runners, the state meet is a new experience. Keep an eye on two other teams that had big section finals performances: Eleanor Roosevelt was right on the heels of Dana Hills, and Bellarmine College Prep dominated their race in the NCS. Normally we would include Jesuit among potential top 5 teams, but they are missing one of their top 3 runners, and that will set them a bit further back in the pack. Want a sleeper candidate to make the top 10? Look at Palisades Charter from the LA City Section, currently ranked 12th in our D1 team rankings.

The top returner from last year's race is Michael Vernau of Davis who finished 8th. Although he is the top returner, Vernau is not the favorite to take home the title. Luis Grijalva from Armijo High School has run 13:58 this year, a nation leading time, and beat Vernau at the Clovis Invitational and the Sac Joaquin Section Finals when the two went head to head. Their times at Clovis, 14:50 (Grijalva) and 14:52 (Vernau) are #15 and #18 all time at Woodward Park as well as the two fastest times ever run at the invitational (they went on to run the 2nd- and 3rd-fastest times in the history of the Willow Hills course). For comparison, last year's champion, Phillip Rocha ran 14:43 at state, but ran 14:58 at the invitational. Not to be forgotten, last year's 10th place finisher Jack Landgraf (Dana Hills) has had a stellar season thus far and is still in contention for an individual title. He finished 5th at the Clovis Invitational, running 15:14. As always at the state meet, the chase pack behind the few strung out individual leaders could be huge. Look for Ethan Comeaux and Colin Fitzgerald (who beat Landgraf last weekend) to be in the hunt for top 5 finishes,  as well as Miguel Villar, Raymon Ornelas, Mikael Beaudoin-Rousseau, and potentially several others.

The ladies of Great Oak have their eyes set on winning an unprecedented 6th state title in a row come race day. A dynasty that has produced back to back NXN podium finishes is the favorite to take home the team title, and the Wolfpack currently sits at #3 in our national Saucony Flo 50 rankings. Last year we saw them come their closest to losing since 2011 after Davis was a mere two points away from completing a major upset. However this year we might be in for another amazing matchup as both teams return five runners from last years state meet. So far this year, Great Oak has beaten them in all three times they've matched up. At both Clovis and Stanford, Davis was only a combined 56 points behind. Although it will not be easy, we could see Davis pull off an upset - and we get the sense that the Blue Devils have not put all their cards on the table yet. Another two teams to keep on your radar screen are Arcadia and Dana Hills. The Dana Hills girls have not had the most consistent of seasons, but when it counts, they have shown up to race. At CIF-SS Finals last weekend they took second to Great Oak, edging out Arcadia by a few points. This young team may not have what it takes to win a state title just yet, but don't count them out of a podium finish. It will be interesting to see how Buchanan does this weekend - the Bears have home-field advantage, and they ran very well at the Central Section finals, possibly putting them on track for a top 5 finish. Yucaipa and Vista Murrieta should also be in the mix. One team to watch for the future: Palisades Charter has 3 freshman in the top 5, and their two seniors ran 6th and 7th in the LA City Section finals. They aren't contenders right now, but this could be valuable experience for a future top 10 team.

The girls race should be one of the most interesting as heavy hitters Fiona O'Keeffe and Destiny Collins both graduated last spring. With these ladies out of the picture, it leaves the door wide open for a runner like Chloe Arriaga. Arriaga has been on a tear this season, running 16:33 and winning a CIF-SS individual title. At last year's meet, she placed 7th and is the second fastest returner from that race. As was the case last weekend, it could be Lauren Peurifoy (King) giving Arriaga the best competition. Emily Virtue is the top returner, placing 6th last year, but she has struggled just a bit this fall on minimal racing, which indicates she might be battling through injury - at CIF-SS Finals, she took 5th place, her best result of the season. Keep your eye out for Sofia Castiglioni (Davis) as well, she ran 17:36 at Stanford this season, placing 2nd; she finished 9th here last year. The top candidate for the race's breakout star is Corie Smith (Buchanan), the freshman that dominated the Central Section Finals in 17:48, winning by 20 seconds. How fast can she go with runners around her this weekend? Can she beat another star in the making, fellow 9th-grader Akemi Von Scherr (La Quinta)? Don't be surprised if the Great Oak front runners get into the top 10 and even sneak one into the top 5. Sierra Brill has to be a candidate for a top 10 finish after clocking 17:26 at Golden Gate Park last week, 16 seconds faster than former teammate Kristen Leung ran last fall, and she finished 5th. One other sleeper candidate: Elena Kamas (Homestead) has been inconsistent this fall, but she certainly has the resume and experience to be a factor on Saturday.