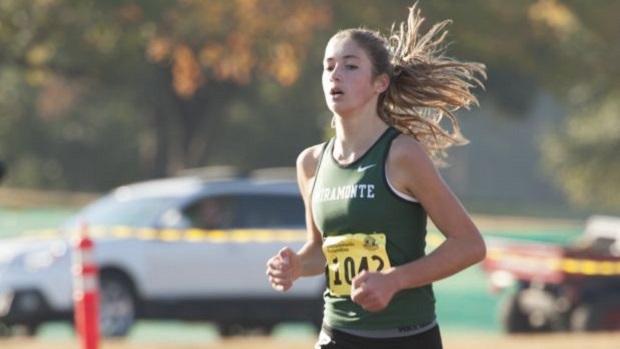 The 2 Mile course at Hidden Valley Lakes is no cake walk, especially for a runner in her first high school race. That didn't stop Isabella Fauria (St. Francis Sacramento) from rolling to an 11:48.5 win in the Large Schools Varsity Girls race, beating her junior teammate Sydney Vandegrift by 7 seconds. Fauria isn't exactly a novice, though - she is a veteran of USATF summer competition and has PR's of 4:36 for 1500 and 10:08 for 3000. On the foundation of that 1-2 finish, St. Francis (SJ) won the race 44 - 63 over Homestead.  This is the same girl that ran 2:19 and 11:09 at Golden West back when she was in 6th grade: 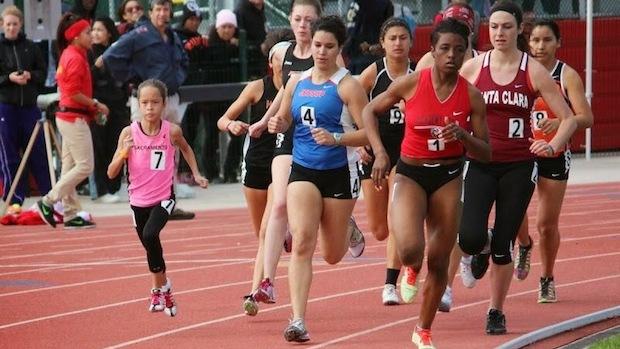 Both Vandegrift and Fauria were able to stay in front of Elena Kamas (Homestead).  Sophomore Cassidy Haskell (Miramonte) ran the fastest time of the day, 11:38.5, in the Small Schools Varsity Girls race.  The team competition in that event was very close, with Vista Del Lago defeating Maria Carillo by a score of 95-102.

On the boys' side, Ryan Cutter (Hercules) ran 10:16.0 to hold off Luis Ramirez (Benicia).  Campolindo took home the Small School Varsity Boys team title, scoring 73 and beating Vista Del Lago by 16 points. Dublin's Adrian Schroeder won the Large Schools Varsity Boys race by clocking 10:05.8, the best of any boy in the meet. He barely fought off Meike Beaudoin-Rousseau (Bellarmine Prep), who led his team to a 53 - 66 win over St. Francis Mountain View.  Bellarmine also looked very strong in the lower-division races, and it will be interesting to see how the combined results look when we put all the races together tomorrow.